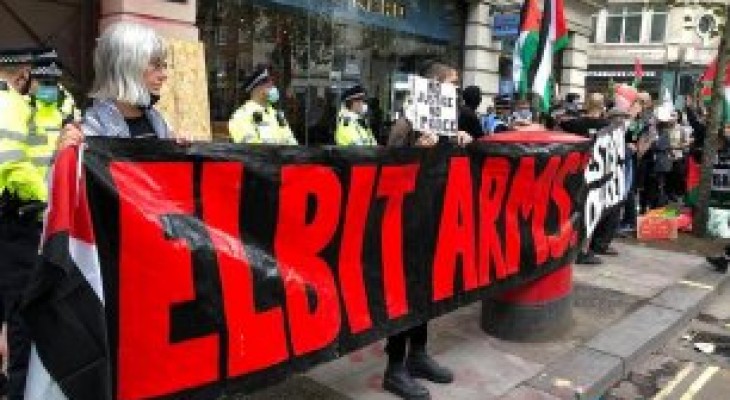 When Huda Ammori heard that Israeli Minister of Strategic Affairs Orit Farkash-Hacohen had asked the British government to act against a recent direct action campaign opposed to Israel’s high-tech arms company Elbit Systems UK, she says she was “elated”.

Ammori, a British-Palestinian researcher with campaign group Corporate Watch, was arrested alongside other activists on Saturday at a protest targeting Elbit Systems’ head office in London.

She is part of the new solidarity group, Palestine Action, which launched at the end of July specifically to target the defence company. The British branch of Elbit Systems supplies the Israeli army with most of the drones used in surveillance and attacks on Palestinians in Gaza, including the recent wave of air strikes against the besieged territory in late August.

“It’s a massive victory to see that the Israeli minister of strategic affairs has to go to [UK foreign secretary] Dominic Raab a month into this new direct action group being launched, and it shows the potential of this movement, of this tactic moving forward to actually end the operation of immoral companies in the UK,” she told Middle East Eye.

During a visit to the UK in August, Farkash-Hacohen specifically mentioned Palestine Action’s protests against Israel’s Elbit Systems, which has offices and factories in Britain, in a meeting with Raab.

"Only last weekend, the offices of an Israeli security company were vandalised for the fourth time in the last month. We want Israeli companies to continue doing business in London. It’s good for both countries,” Farkash-Hacohen said in the meeting, also attended by Israel’s defence minister Benny Gantz.

The Israeli minister conflated the campaign with anti-Jewish hatred on social media, consistent with the long-running Israeli narrative that the Boycott, Divestment and Sanctions (BDS) movement against Israel’s occupation and human rights abuses is antisemitic.

Ammori was arrested along with three other protestors, and detained for 15 hours for questioning before being released on bail. The bail conditions include staying out of parts of London and other areas where Elbit offices and factories are located, following a series of dramatic actions publicised by the group on social media.

Despite this, she sees the action as a success in putting a spotlight on Elbit's activities and its major presence in the UK.

“All in all it was a very successful protest - we saw loads of people coming out, and I think this shows that the atmosphere is changing in the UK, and in the movement, and people are realising more and more that we need to step up and take direct action to make effective change."

In videos shared by Palestine Action online taken during previous actions, activists storm into Elbit's offices, spill fake blood in a lift area and spray slogans on the walls before being ejected by security staff. In another, they carry out protests outside the company's British factories.

A week after their first visit to Israeli arms company Elbit in London, activists return for the sequel #ShutElbitDown @RealMediaGB pic.twitter.com/4ThtWBbHm1

Ammori sees the recent protests and the demonstration on Saturday - the first one inviting members of the public to join in outside Elbit’s London headquarters - and the Israeli government reaction to the campaign as a sign they are winning.

“Since Palestine Action was launched, all ten Elbit sites have been targeted so far, including the Oldham factory, the factory in Kent, the offices in London several times, and also the landlord’s office in Mayfair. And that was after they didn’t respond to letters by Palestine Action. They were also targeted with a statement saying that if you aid war criminals, you are war criminals."

“Palestine activists have had a lot of attacks and accusations previously, and repression, whether in the Labour Party or elsewhere... We needed something to match that on a grassroots level and I think that means having a mass direct action movement internationally.”

The traditional campaigning methods used by solidarity groups of petitions and letters to MPs were no longer working and had failed to grow the movement, Ammori argued. “We know the government knows what’s happening in Israel, we know that they know what’s happening to Palestinians, it’s a fact that it’s apartheid, but it’s being ignored.”

The example of climate change group Extinction Rebellion and the huge impact it had in its first year proved that its model of civil disobedience and direct action was a more effective form of protest and could bring urgency to the issue of Palestine, Ammori says.

“I personally think that we as campaigners have been ignored and repressed for years and years when we’re calling for the UK government, companies, and institutions to be held to standards that are in line with international law and human rights conventions.”

Elbit Systems supplies more than 80 percent of the Israeli army’s drones, used in Israel’s repeated assaults on the besieged Gaza Strip, and promotes its technology as “combat-tested” by Israel’s military. Elbit's Hermes 900 drone was first deployed during the 2014 assault on the Palestinian enclave, during which more than 2,200 Palestinians were killed.

Middle East Eye has contacted Elbit Systems UK for comment but received no response at time of publication.

Based in Haifa, the company manufactures most of its equipment in Israel, the US, Europe and Brazil, and around 80 percent of its revenues are from overseas contracts, according to a Corporate Watch profile. But its surveillance systems have become popular with governments including the US and UK as they seek to militarise border controls against people escaping war and poverty.

Last year, US Customs and Border Protection entered into a $26m contract with the US division of Elbit Systems to build a surveillance system along the US border with Mexico, with night vision cameras, thermal sensors, and ground-sweeping radar.

In February, Elbit was awarded a £900,000 contract to demonstrate and carry out drone surveillance of British coastal waters for the UK’s Maritime and Coastguard Agency.

Elbit Systems also won a $103m contract earlier this year with a major Asian nation, most likely India, to supply electronic warfare technology to its fleet of helicopters.

Yet Ammori sees activists in the UK as in a good position to take action that can have a real impact on the company’s operations. “Many of us are in very privileged positions compared to Palestinians who are at the end of British foreign policy and the action of the British government and state over 100 years after the Balfour declaration.

“But we hope that these tactics and the model of how we are organising will be adopted and taken up and this will send waves across the world with activists taking direct actions where they are against Elbit Systems.

“When we are strategic and focused on Elbit we have a real chance of winning and closing down Elbit Systems in the UK."