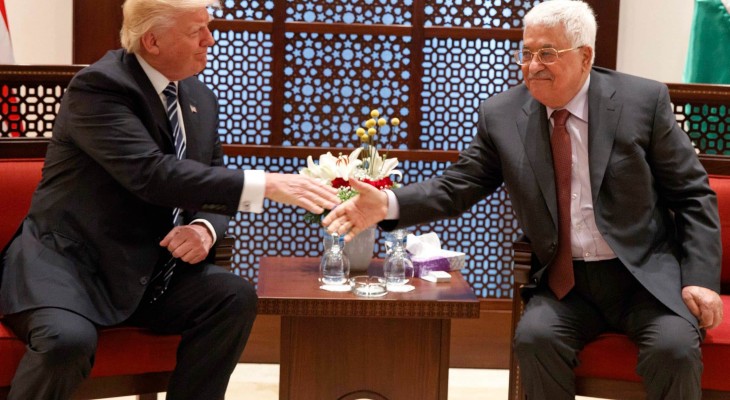 The incident occurred on May 22, 2017, at a time when Trump was beginning to have doubts about Netanyahu and wondering aloud if the Israeli prime minister might be the real obstacle to peace with the Palestinians, Woodward wrote, according to excerpts from the book published by U.S. media.

A day after watching the "spliced-together" video intended to "counter any pro-Palestinian sentiments that were surfacing," Trump confronted Abbas, calling him a "murderer" and "liar," and shortly after ordered the closure of the Palestinian representative office in Washington and cut nearly all U.S. aid to the West Bank, Gaza and Palestinian refugees.

On May 27, 2017, Haaretz covered reports of shouting during a meeting between Abbas and Trump, and was told by a top Palestinian figure that "there is a power struggle here for the president's ear and of course the Paletinians aren't in the best position."

Israel's Prime Minister Benjamin Netanyahu, right and US President Donald Trump talk to the press before a meeting in Jerusalem, May 22, 2017. Credit: Menahem Kahana,AP
As described by the Jewish Insider, which obtained an advance copy of the book, Woodward portrays a strained relationship between Tillerson and Trump's son-in-law Jared Kushner, who was tasked with resolving the Israeli-Palestinian conflict. Tillerson believed Netanyahu's relationship with Kushner, whose family he had known for many years, was "nauseating to watch."

After Kushner had shown Tillerson several versions of the Middle East Peace Plan, Tillerson told Kushner that Palestinians "are not going to care about your money … That's not going to buy you peace.” Tillerson was sacked in March 2018 and was replaced by then CIA director Mike Pompeo.