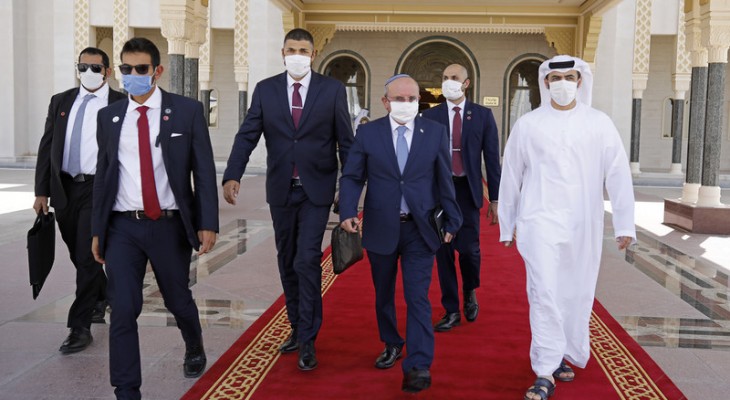 The United Arab Emirates insists that its agreement to normalize relations with Israel was a means to halt Israel’s plans to annex occupied West Bank land.

Yet this month the UAE is welcoming two of the largest financiers of illegal Israeli settlements to its capital.

Delegations from Bank Hapoalim and Bank Leumi will visit Dubai and Abu Dhabi to meet with government officials and heads of the largest banks in the UAE, according to Tel Aviv daily Haaretz.

Hapoalim will lead an Israeli business delegation to the UAE on 8 September, and Leumi will follow on 14 September.

This comes after the UAE’s central bank signed a memorandum of understanding with Israel on 1 September for financial cooperation.

The governor of the central bank, Abdulhamid Saeed Alahmadi, signed the agreement with Ronen Peretz, director-general of the Israeli prime minister’s office, in the presence of Israel’s national security adviser Meir Ben-Shabbat in Abu Dhabi.

The largest bank in the Gulf state, First Abu Dhabi Bank, announced that it will “open discussions” with Hapoalim and Leumi “to establish banking relationships that will strengthen financial and economic cooperation between UAE and Israel.”

Following the signing of a Memorandum of Understanding between the UAE Central Bank and the Israeli Prime Minister’s Office, First Abu Dhabi Bank (FAB) will open discussions with leading financial institutions in Israel, namely Bank Hapoalim and Bank Leumi.

The group, which leads the global boycott, divestment and sanctions campaign, said it would call for a boycott of the bank if the plan goes ahead.

The BNC says it will “target and call for a boycott of any Emirati, Arab or international company that colludes in implementing the shameful agreement between the UAE and the Israeli regime.”

Hapoalim and Leumi are deeply complicit in financing the theft of Palestinian and Syrian land for the construction of settlements in violation of international law.

Israeli banks’ complicity in settlement construction has landed them on the UN’s database of companies profiting from Israel’s war crimes in occupied territory.

It has also prompted major international financial institutions to divest from Israeli banks.

Earlier this year, Israel was charging towards formal annexation of large parts of the occupied West Bank, but the United States put those plans on hold.

The UAE tried to spin the US-imposed freeze as an achievement for Palestinians in exchange for full diplomatic relations with Israel.

In reality, annexation is only a formal rubber stamp for what Israel has been doing on the ground for decades: stealing land, forcibly displacing Palestinians and building colonies in flagrant breach of international law.

Now, the UAE is not only ignoring Israel’s de facto annexation of occupied West Bank land while feigning opposition to its formalization, but it is seeking business with corporations that finance those crimes.

Israel’s intelligence minister Eli Cohen said trade deals between the two countries are expected to reach $4 billion annually, and would include arms transactions.

A signing ceremony is expected to take place at the White House this month and be followed by an official Emirati delegation taking a trip to Israel, Reuters reported, citing an unnamed source.

The UAE laid out the red carpet for the first official Israeli delegation to Abu Dhabi last month.

A number of Israeli business jets have arrived in Abu Dhabi since the official visit.

Israel’s national airline El Al flew over Saudi Arabia – with which it has no formal diplomatic relations – on the way to Abu Dhabi, and Prime Minister Benjamin Netanyahu even made a phone call to the flight while it was in Saudi airspace.

Bahrain and Saudi Arabia both agreed to allow Israeli flights to travel in their airspace on the way to the United Arab Emirates, significantly reducing travel hours.

Despite its efforts to curry favor with Israel, the United Arab Emirates has still ended up with egg on its face.

A New York Times report citing unnamed sources revealed last week that Netanyahu had given the green light for the United States to sell F-35 warplanes to the UAE while the normalization agreement was being brokered.

The F-35 is made by US arms giant Lockheed Martin, one of the biggest beneficiaries of US military aid to Israel and a primary focus of the Palestinian-led boycott, divestment and sanctions (BDS) movement.

After the announcement of the deal, Netanyahu and members of his cabinet categorically denied that Israel would give such a green light.

Netanyahu denied the Times report, saying that at no point did he give such consent.

Palestinian Authority Prime Minister Muhammad Shtayyeh had called the visit “a clear and a blatant violation of the Arab position toward the Arab-Israeli conflict.”

But the PA is backing off its criticism in advance of an Arab League meeting in Cairo on Wednesday.

Reuters reported that the Palestinian envoy’s draft resolution “does not include a call to condemn, or act against, the Emirates over the US-brokered deal.”

In contradiction of Shtayyeh’s statement, the draft deems that the Abraham Accord does not “diminish Arab consensus over the Palestinian cause.”