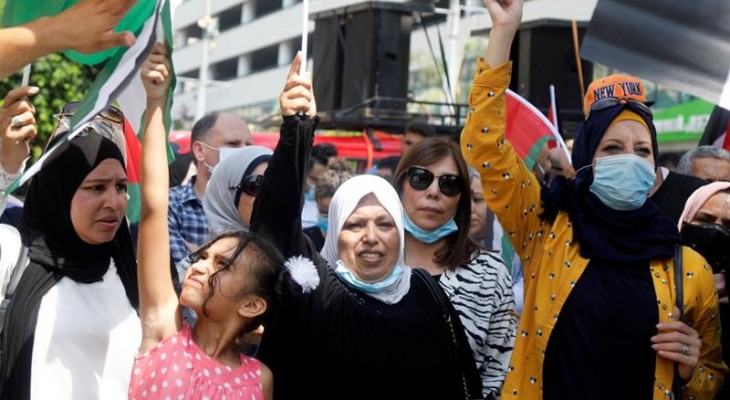 At a video conference of foreign ministers, the Palestinian leadership softened its censure of the UAE over the US-brokered August 13 accord - to be formalised at a signing ceremony at the White House next week - in the hope of getting more Arab support, but to no avail.

"Discussions regarding this point were serious. It was comprehensive and took some time. But it did not lead in the end to agreement about the draft resolution that was proposed by the Palestinian side," Arab League Assistant Secretary-General Hossam Zaki told reporters.

According to a Palestinian diplomatic source, the Arab League dropped the draft resolution condemning the controversial Israeli-UAE agreement.

Palestine and Arab countries agreed to include an emphasis in the final communique on commitment to the 2002 Arab Peace Initiative, the two-state solution, and the land-for-peace principle, Palestinian Ambassador Muhannad Aklouk told local news agency Maan.

After a three-hour discussion, both Palestine and the Arab countries agreed not to include a clear condemnation of the UAE-Israel deal, he said.

Some Arab states, however, attempted to add some provisions to give a form of legitimacy to the normalisation agreement. He did not name the countries.

"In response, Palestine presented a draft resolution that condemns the UAE-Israel normalisation deal," Aklouk said. "The Arab countries, however, voted down the draft."

"In the face of the UAE-Israeli normalisation agreement, it has become necessary for us to issue a position to reject this move," he said. "Otherwise, our meeting will be considered as a blessing or being complicit with the normalisation."

The secretary-general of the Arab League, Ahmed Abul Gheit, has stressed the Palestinian cause is and will continue to be the subject of Arab consensus, and the 2002 Arab Peace Initiative remains the road map for a just solution.

"The goal all our Arab countries seek, without exception, is to end the [Israeli] occupation and establish an independent Palestinian state on the 1967 borders with East Jerusalem as its capital," Abul Gheit said during his speech at the 154thsession of the Arab League.

To achieve comprehensive and just peace between the Arabs and Israel, he added, the Arab Peace Initiative adopted at a summit in 2002 is still "the basic plan agreed upon by the Arab world".

"I reiterate our rejection of any plans or arrangements presented internationally that would undermine the Palestinian right, or prejudice the status of the city of Jerusalem, whose case should be resolved within the framework of the final settlement," said Abul Gheit.

He added each country has the "sovereign and indisputable right" to conduct its foreign policy in the way it sees fit.

For its part, Saudi Arabia said it supports all efforts to reach a comprehensive solution to the Palestinian-Israeli conflict.

But a statement released by the Saudi foreign ministry on remarks made by Foreign Minister Prince Faisal bin Farhan al-Saud included no direct mention of a normalisation deal between Israel and the UAE.

The prince said Riyadh supported the establishment of a Palestinian state based on the borders before the 1967 Middle East war, with occupied East Jerusalem as its capital, according to the statement.