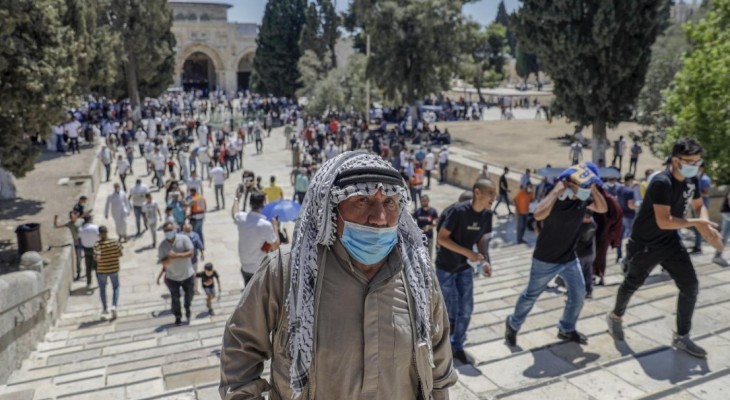 Israeli police installed loudspeakers in the Al-Aqsa Mosque compound in occupied East Jerusalem on Wednesday, a move condemned by Palestinians and the mosque's Jordanian custodians as a violation of the holy site.

The new speakers, set up by the compound's western Ablution Gate are the third instance of Israeli loudspeakers installed in or around the compound since 2017.

The first were installed that year on the roof of the nearby Omariya School, close to the compound's northwestern Bani Ghanim gate. The second were set up on Sunday on top of Al-Aqsa Sharia School near the northeastern Gate of the Tribes.

With the third set of loudspeakers, Israeli authorities will be able to broadcast to the northern side of the Al-Aqsa Mosque compound from the inside and outside, in parallel with the one run by the Islamic Waqf (endowment) in charge of the religious site.

The speaker system would enable Israeli forces to make announcements and instructions to those present in the mosque, including Muslim worshipers and Jewish settlers who regularly storm the compound in violation of the custodianship agreement limiting non-Muslim prayer on the site.

The Israeli move is seen by Palestinians and Muslim worshipers as the latest attempt to threaten the compound's integrity as a Muslim site of worship, possibly paving the way for further encroachment by Israeli forces.

The former grand mufti of the Al-Aqsa Mosque, Ekrima Sabri, told Middle East Eye that Israel seeks to impose its sovereignty over the mosque and undermine the Islamic Waqf, the Jordan-affiliated endowment historically tasked with managing the holy site.

While the Al-Aqsa Mosque compound - also known as Haram al-Sharif - is the third holiest site for Muslims, some Israelis believe it was built where the First and Second Jewish Temples once stood - with some far-right Israeli figures openly advocating for the destruction of Al-Aqsa so a Third Temple can be built in its place.

"The occupation's measures against Al-Aqsa are invalid and illegal,” Sabri told Middle East Eye. “We do not recognise them. We hold the Israeli government responsible for violating the sanctity of Al-Aqsa, because it is directly responsible for any aggression and it is the one that protects the settlers storming the site, encouraging them to increase their numbers."

On the possible scenarios for ways to use the new loudspeakers above Al-Aqsa, Sabri theorised that their aim is to tighten the Israeli police's control of the mosque and further monitor Palestinian worshipers.

He added that the loudspeakers may be used to unilaterally close the mosque without coordination with Waqf authorities, or to deliver statements in Hebrew to settlers or otherwise broadcast Jewish prayers.

“We are now witnessing the process of creating a parallel infrastructure and administration in Al-Aqsa,” Abhais told MEE.

In 2005, Israel surrounded the Al-Aqsa Mosque compound with a network of more than 200 thermal sensors to monitor every movement on the roofs, walls and halls.

Last Thursday and then again on Sunday, employees of the Islamic Waqf refused to open the Gate of the Tribes minaret to Israeli police. That prompted security personnel on Sunday to storm the compound from the same gate, using ladders to climb to the top of the northern wall and install the loudspeakers.

Translation: On Sunday, Israeli occupation police stormed the Al-Aqsa compound in occupied Jerusalem and placed ladders at the entrance of the Gate of the Tribes minaret, then went up to the roof by force to start installing loudspeakers facing al-Ghazali Square.

On Monday, Jordan's foreign ministry condemned what it described as “continuous Israeli violations” at the Al-Aqsa compound after the installment of the loudspeakers.

A ministry spokesperson said the “absurd practices” at the UNESCO world heritage site are “irresponsible and constitute a provocation against the feelings of Muslims around the world”.

In a statement, the Jordanian ministry also demanded an end to the violations, stressing that the Al-Aqsa Mosque is a “pure” Islamic site and that the Jordanian administration of the Jerusalem Waqf is the sole authority responsible for overseeing all its affairs.

Since the announcement on 13 August that Israel and the United Arab Emirates have reached an agreement paving the way for official diplomatic relations between the two states, Jordan has looked on with concern at how the developments might affect the Hashemite kingdom's custodianship in Jerusalem.