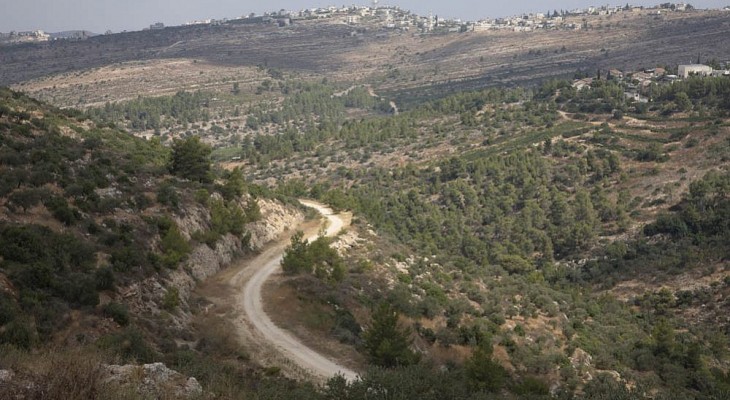 Israel’s Transportation Ministry has recently started planning a new settler road to shorten the distance between western Ramallah in the occupied West Bank and Jerusalem.

According to settlers in the area, Road 935 will allow the creation of a bloc with 100,000 Jewish settlers in a “strategic location” north of Jerusalem. In practice, the road will trap the entire urban area of Ramallah, which has a population of 200,000 Palestinians, among blocs of Israeli settlements.

The road is slated to pass through Palestinian private land west of Ramallah, although Israel’s High Court had previously ruled that its construction will lead to “disproportionate damage” to Palestinian property.

Road 935 is supposed to connect the so-called “Horseshoe Junction” near the settlement of Dolev and the Palestinian village of Deir Ibzi’ to Route 443 around the village of Beit Ur a-Fauqa and the settlement of Beit Horon. Its route is particularly sensitive, as it is supposed to intersect with the main road connecting Ramallah to the western parts of West Bank. Furthermore, it also passes through areas that, according to a map in U.S. President Donald Trump’s Mideast plan, are to be located in the areas slated to become part of the future Palestinian state.

That is, if the road is paved, the Palestinian “state” proposed in the plan, which in any case appears small and non-contiguous, will shrink and become further fragmented.

The road is supposed to serve the settlers in the Dolev-Talmonim settlement bloc. Today, about 10,000 settlers live in this quasi-enclave, which separates the Palestinian cities of Ramallah and Beitunia from the western parts of the West Bank.

At the beginning of the Second Intifada, a checkpoint was moved from the entrance to Talmonim to a main road that also served the Palestinian residents in the area, thus blocking access to tens of thousands of dunam of private Palestinian land between Dolev, Nahliel and Halamish settlements, respectively, about 10 miles to the north.

According to Dror Etkes of Kerem Navot, an Israeli NGO that monitors settlement activity in the occupied territories, the Palestinian landowners are allowed to visit their land only a few days a year by prior arrangement and with army accompaniment.

Indeed, while driving last week along a 10-kilometer stretch of this road, not a single Palestinian car could be seen. The olive and fruit trees along the road looked clearly neglected, compared to the manicured olive groves near the Palestinian villages.

Until the First Intifada in the late 1980s, the settlers who lived in the area traveled to Jerusalem via Ramallah and Beitunia, about a 20-minute drive. 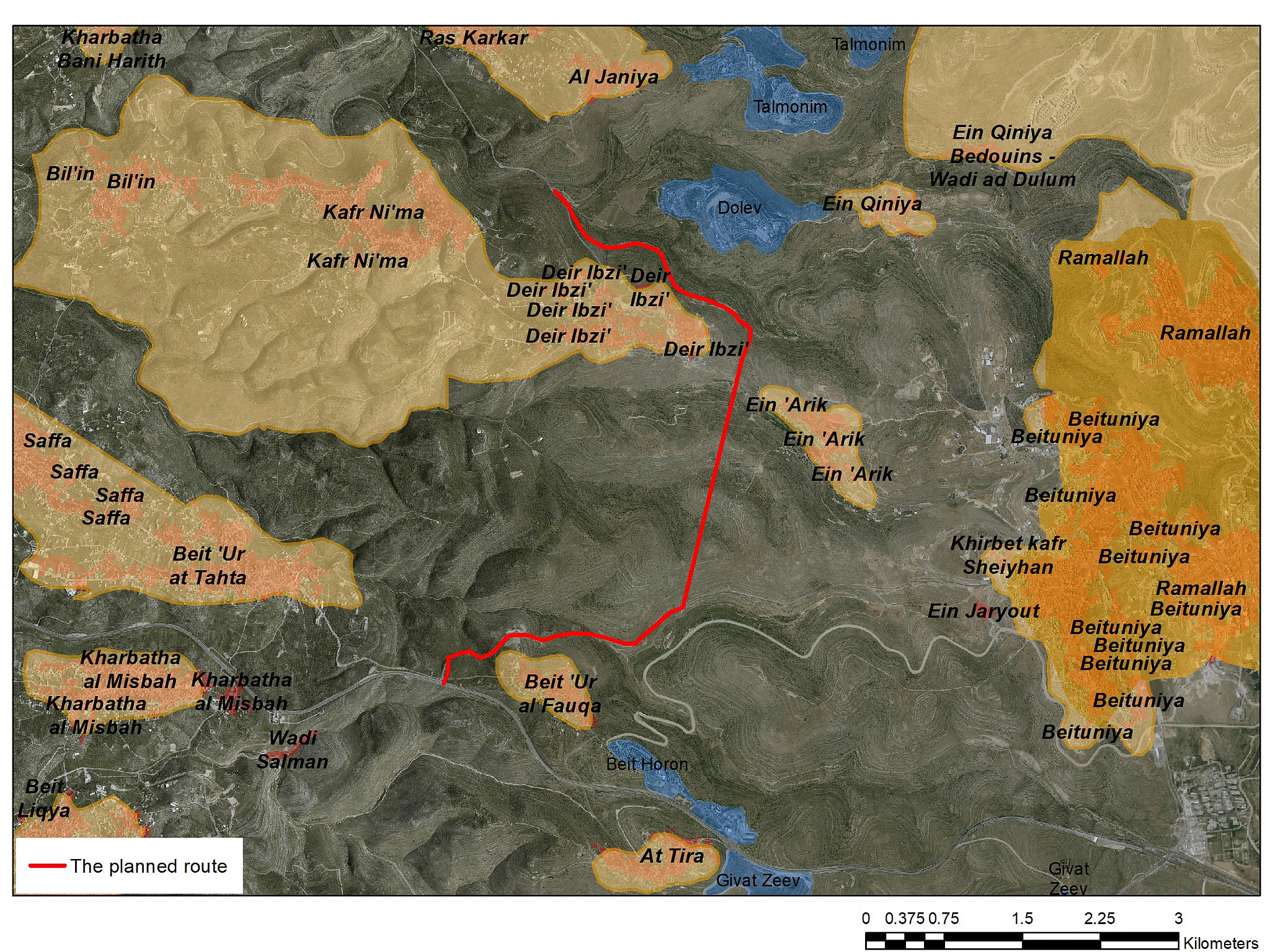 After the Intifada, and even more so after the Oslo Accords and the declaration of Beitunia and Ramallah as part of Area A (under the full control of the Palestinian Authority), settlers from the Dolev-Talmonim area who want to reach Jerusalem must travel west to Shilat Junction before taking Route 443, a journey that can take over an hour without traffic.

As early as the mid-1990s, the settlers in the area began to press for a bypass road that would connect them directly to Route 443 and shorten the journey to Jerusalem by more than half an hour.

Their request was granted, and in the late 1990s and early 2000s, around 150 acres of Palestinian land were expropriated from Deir Ibzi’, Ein Arik, and Beitunia to pave the road. Work begun on a mile-long stretch of road near Deir Ibzi’, but with the intensification of violence during the Second Intifada — the southern part of the route was supposed to pass very close to the Palestinian city of Beitunia — work on the road came to a halt.

Jewish settlers in the area led by Adi Mintz, a resident of Dolev and a former senior member of the Yesha Council — the lobbying and political arm of West Bank settlements — petitioned the Israeli High Court in 2007 to complete the construction of the road.

In the petition, the settlers claimed that they were being “discriminated against” in comparison to the Palestinians in the area, for whom, as part of the construction of the separation wall in the area, Israel paved an alternate network of “fabric of life” roads connecting Palestinians to Ramallah. The settlers further argued that because the drive to Jerusalem can reach two hours in the morning due to traffic, the value of their properties decreases and their “property rights are being violated.”

The state objected to the petition, claiming that from a security point of view, it would be very difficult to protect the road, which passes through a densely populated Palestinian area. The state also claimed that there are both planning and archeological issues with paving the road, as it crosses two important archeological sites dating back to the Second Temple period (516 BCE-70 CE). 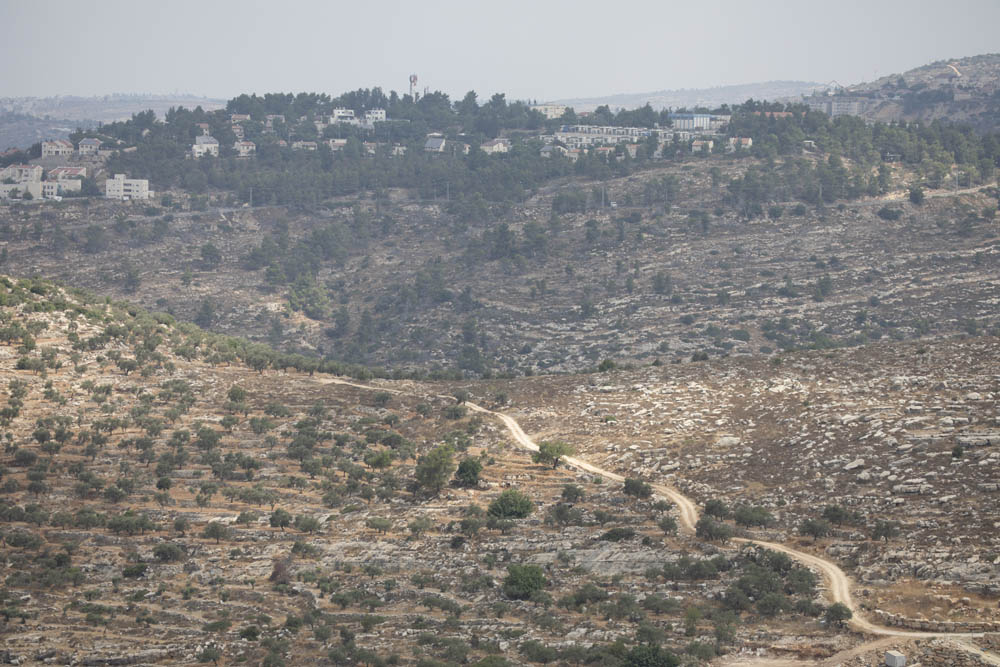 The state further stated that paving the road “involves the expropriation of private [Palestinian] land in a manner that disproportionately harms their property.”

Finally, in 2009, three Israeli High Court justices dismissed the petition and refrained from interfering with the state’s decision not to pave the road. Justice Asher Grunis stated in his decision that “the harm caused to the Palestinians is particularly severe, since the assumption is that if the road is paved, it will be used by the Israeli residents.”

In 2012, the High Court turned to Israeli human rights organization Yesh Din, which represented the Palestinians whose lands had been expropriated, and, in an extraordinary move, decided to rescind the expropriation and return the land back to their rightful owners.

Yet the early stages of the road, which had already been paved through their land, were not covered over. On a tour of the area last week, it appeared that the Palestinian farmers had not returned to cultivate these plots. Settlers use the dirt road that was already constructed to reach the Ein Bubin spring.

The settlers did not give up and continued to demand the establishment of a road that would connect them to Route 443 and shorten their drive to Jerusalem and Tel Aviv.

At a meeting of the Knesset Subcommittee for Judea and Samaria in February 2018, Mintz said that the Oslo Accords had “imprisoned” the settlers in the Gush Dolev-Talmonim area, and that getting to work in the morning has become an “impossible nightmare” forcing them to get up earlier.

In recent months, the Transportation and Road Safety Ministry decided to end that “nightmare.” According to Mintz, he was able to convince the government to resume planning. “We’re in advanced planning stages,” Mintz said. “This is my baby.”

The current length of the proposed route is only four miles long, but a tour of the area last week revealed the difficulties ahead. The road is supposed to cross at least three rather steep ridges, as well as the main road between Ramallah and the West Bank areas between Ein Arik and Dir Ibzi’. Meanwhile, environmental experts have expressed concern about severe damage to the surroundings.

Mintz, however, claims that the road is “neither complicated nor expensive,” and believes the project will be completed within four years. He refused to go into detail about exactly how much the road is going to cost, however. In the Knesset subcommittee meeting, Mintz said there is also the possibility of paving a “bridge and tunnel” that will greatly shorten the trip.

It seems the Transportation Ministry has yet to come up with solutions for the topographic issues, the land expropriation, and traffic arrangements for Palestinians.

Mintz makes no secret of the fact that his goal is to use the road to develop the area, which is currently sparsely populated with settlers, certainly when compared to other areas around Jerusalem. “There is room for 100,000 people here, there is state land,” he said.

According to Mintz, there already exists a master plan for 15,000 households. “This road is essential because our location is strategic. We are the mirror image of Gush Etzion [settlement bloc]. Just as Gush Etzion connects to the Jerusalem corridor from the south [of the West Bank], we will be able to connect to the Jerusalem area from the north.”

Mintz is not worried that the road is supposed to pass inside areas designated to be part of a Palestinian state under the Trump plan. He believes the agreement with the UAE has rendered the “Deal of the Century” irrelevant, and in any case, he added, “Israeli officials presented the Americans with a map in which this issue was handled,” implying that the area in which the road passes will remain under Israeli control.

Mintz said that the Palestinians will also “enjoy” the roads, since they will be able to reach villages near Route 443. However, Palestinians from Ein Arik said that paving a road directly on their land would lead to severe resistance. “I will die on my land,” said one resident of the village.

Kerem Navot’s Etkes views the decision to implement the plan as part of a larger infrastructural project meant to serve Israeli settlers in the occupied West Bank, the likes of which we haven’t seen since the lead-up to the Oslo Accords in the mid-90s.

According to Etkes, “these infrastructure projects are meant to serve as the basis upon which Israel intends to settle hundreds of thousands of Jewish citizens in the coming decades. The real story of Israeli apartheid in the West Bank is not the formal annexation, which did not materialize despite the promises, but the annexation in practice, which has continued for 53 years and is now breaking records.”

Mateh Binyamin Regional Council told +972 that the plan is part of the “road revolution” it has been promoting to “develop the entire region and make up for the years in which the state neglected the road planning in Binyamin and Judea and Samaria at large.” The roads will serve “all residents of the area, including Arabs, and will greatly shorten travel time,” the council added.

In a statement given to +972, the Transportation Ministry stated that “the decision regarding Road 935 was made at a meeting with the Mateh Binyamin Regional Council, with the aim of providing a transportation solution to connect the communities of Talmon and Beit Horon. The road is currently in the initial planning process.”