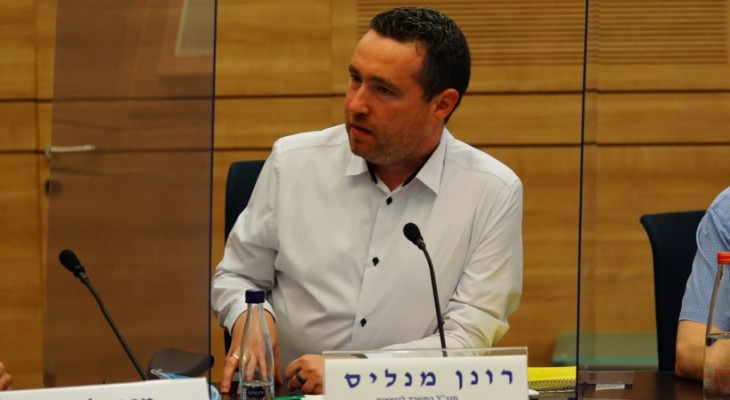 The Strategic Affairs Ministry is shifting its focus from the Boycott, Divestment and Sanctions (BDS) movement to delegitimization of Israel more broadly, its director-general Ronen Manelis told the Knesset State Control Committee on Tuesday.

“Whoever doesn’t recognize Israel, in any boundaries, as a Jewish state, is delegitimizing the State of Israel,” Manelis said, giving the Strategic Affairs Ministry’s definition of the term.

“Whoever doesn’t recognize Israel, in any boundaries, as a Jewish state, is delegitimizing the State of Israel,” Manelis said, giving the Strategic Affairs Ministry’s definition of the term.

Delegitimization will be a major challenge to Israel in the coming years, Manelis said, citing the expected decision of the International Criminal Court, the UN Human Rights Commission’s blacklist of companies operating in Judea and Samaria, online antisemitism, as well as conspiracy theories surrounding the coronavirus pandemic and related economic crisis as “fertile ground” for anti-Israel actions.

In his overview of the ministry’s work, Manelis cited research in recent years showing ties between terrorist groups and delegitimization organizations, many of which receive funding from foreign governments.

The ministry’s efforts to publicize the research and show it to governments friendly to Israel has led to the closure of more than 50 related bank accounts and for more careful regulation in several European countries regarding aid to NGOs, thus harming the anti-Israel groups’ funding, he said.

The Strategic Affairs Ministry also plans to increase its focus on social media, in an attempt “to balance the antisemitic and anti-Israel discourse,” Manelis said. “We can influence the awareness of people around the world.”

Manelis, Foreign Ministry Deputy Director-General for Public Diplomacy Noam Katz and Jewish Agency chairman Isaac Herzog all raised concerns about social media companies’ policies regarding antisemitism. Herzog said he has sought to have the companies adopt the International Holocaust Remembrance Alliance’s definition of antisemitism, and met with Facebook executives in Palo Alto, California, shortly before the coronavirus outbreak to discuss the matter.

Katz said the dialogue with social media companies is “not just about delegitimization. It is about misinformation and disinformation, and about incitement that turns into radicalization and terror.”

The Foreign Ministry’s position on social media companies’ policies toward these posts is that the companies are responsible for the transfer of information, and as such, it is not a matter of free speech or a violation of the First Amendment to crack down on hate speech.

Katz also said cooperation with the Strategic Affairs Ministry, which was once fraught, has improved and they have a clearer division of labor. One of the Foreign Ministry’s advantages, Katz explained, was that they have staff around the world with knowledge of what is happening on the ground, combined with a broader view to evaluate international trends.

Manelis also gave an overview of the network of pro-Israel organizations working with the ministry. One form of partnership with the NGOs is that the ministry matches funds raised to counter delegitimization. In light of the coronavirus and economic crises, 40% of those organizations reported their funding will decrease by 25% or more this year.

In response to questions from Control Committee chairman Ofer Shelah (Yesh Atid), Manelis conceded that the Strategic Affairs Ministry-established company Concert spent only NIS 18 million out of NIS 128 million that was budgeted in 2019 for a three-year period. Shelah suggested that the ministry reevaluate its strategy over the next year if it has not found ways to use the funding to do its job.

Manelis also committed to having the Strategic Affairs Ministry be more transparent about how it spends its budget, after in recent years there was a controversial gag order on the matter.

Shelah commended Manelis and said: “This is not just money from our pockets, it’s a topic of national importance. It cannot be that an entire government ministry can hide behind confidentiality.”

“Next year will be a year of examination and challenges,” Shelah said. “Everyone agrees on one thing – this is a supremely important matter... We have to be prepared, because reality is only getting more complicated and we need to be organized, clear and transparent when facing our challenges.”