Group of European MPs say 'no' to W.Bank annexation by Israel 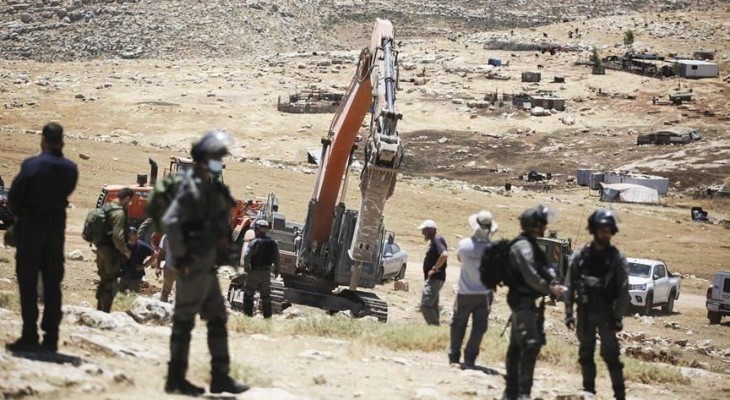 A group of European MPs from the UK, France, Ireland, and Belgium have released a statement on Wednesday to reject the “illegal plan” of Israel’s annexation of part of the occupied West Bank.

Convened by Stephen Kinnock, a British MP and the co-chair of the Britain-Palestine All-Party Parliamentary Group, the lawmakers agreed to challenge and seek to deter Israeli Prime Minister Benjamin Netanyahu’s controversial plan.

Prompting parliamentary colleagues from Europe and the US to sign their statement to oppose the proposed annexation, the group also appealed the public members to forward it to their local MPs.

'No to annexation plans'

The document released on Wednesday with the title “No to Israeli annexation plans” will remain as a live document and open for signature for politicians who would like to express their opposition to the move.

The statement reads: “We, the undersigned, share our deep concern at the threat of illegal Israeli annexation of part of the occupied Palestinian West Bank. Unilateral annexation of any part of the West Bank would be a grave breach of international law, and a further obstacle to achieving equal rights and self-determination for Palestinians. Annexation must not pass unchallenged."

“We fully support our Parliamentary colleagues in Europe, the United States and Israel who have spoken out against annexation – particularly in the letter initiated by Avraham Burg, former Speaker of the Knesset [the Israeli parliament], and signed by 1080 Parliamentarians across Europe.

“A lasting solution to the conflict must meet the legitimate aspirations and security needs and guarantee equal rights of both Israelis and Palestinians… Acquisition of territory by force has no place in 2020 and must have commensurate consequences,” it added.

“We note with approval the statements of the European Union and of the Governments of Ireland, France, Sweden, Belgium and the United Kingdom that Israeli annexation would be a violation of international law and not be recognized.

“In fulfilment of the right to self-determination of both the Palestinian and the Israeli peoples, we commend the decisive votes in our respective Parliaments in favour of recognition of the state of Palestine alongside the state of Israel on pre-June 1967 borders, as a prerequisite for a comprehensive peace, ending the Occupation,” the statement also said.

The statement underlined various parliament votes on the issue in the UK, Ireland, France, and Belgium, and said they were “a clear basis for further action by these governments,” also recalling “the decision of the Government of Sweden on 30 October 2014 to recognise the state of Palestine alongside the state of Israel.”

“We considered commensurate consequences in the event of annexation. We agreed that Israel’s international standing, already harmed by systematic illegal acts of settlement construction, would be damaged very significantly by any act of annexation – and that Israel should not benefit economically from these acts,” the statement noted.

“We invite Parliamentarians elsewhere in Europe and in the United States to join a coalition to avert annexation and to preserve the prospect of Palestinian self-determination and equal rights for both peoples within a two-state framework: a secure, sovereign Palestine alongside a secure, sovereign Israel.”

The MPs said they would “meet virtually” soon as required by developments on the ground.

As part of US President Donald Trump’s so-called “Deal of the Century,” Netanyahu had announced last month that his government would formally annex the Jordan Valley and all settlement blocs in the West Bank.

The West Bank, including East Jerusalem, is viewed as occupied territory under international law, thus making all Jewish settlements there -- as well as the planned annexation -- illegal.

Palestinian officials have threatened to abolish bilateral agreements with Israel if it goes ahead with the annexation, which will further undermine the two-state solution.

The majority of the international community including the EU members do not recognize Israel’s sovereignty over territories that it has occupied since 1967.