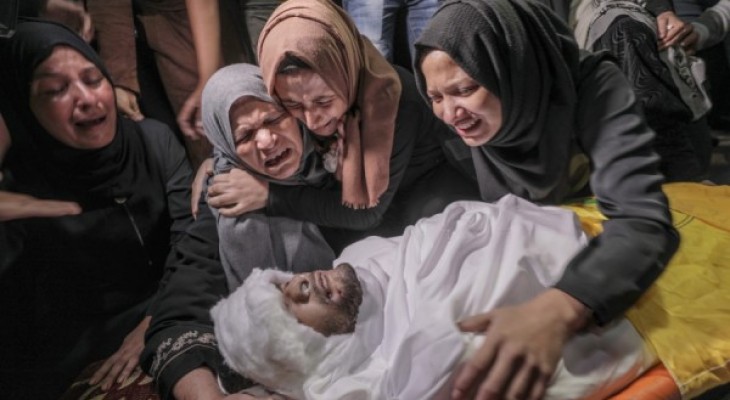 Mother (2-L) and sister (R) mourn over the body of Palestinian farmer Ahmed al-Shehri during his funeral in Khan Younis refugee town southern Gaza Strip, 02 November 2019. Al-Shehri, 27, was killed after an Israeli airstrike targeting a watermelon farm in Khan Younis town, southern Gaza Strip. According to reports, the Israeli military on 02 November attacked positions belonging to the Islamist organization Hamas in the Gaza Strip, after missiles were fired into Israeli territory. One Palestinian Farmer was killed after the strike and two others injured. EPA/MOHAMMED SABER

Occupied Palestine (QNN)- The occupation state has killed 27 native Palestinians, including 7 children and two women, wounded 1070, and arrested 2330 others since the start of 2020, according to a human rights watchdog.

A new report issued on Sunday by Abdullah Al Hourani Center for Studies and Documentation revealed that the Israeli authorities planned for thousands of settlement units in the West Bank and Jerusalem as well.

It added that the occupation state also has demolished 357 houses and structures. 54% of the demolitions took place in Hebron and Jerusalem.

The report also stated that 2330 Palestinians were arrested during the first half of 2020, including 304 children and 70 women.

Palestinian prisoners are being subjected to very harsh treatment and they are locked in inhumane conditions, being deprived of their basic needs. 700 patient prisoners are is a serious danger amid the Covid-19 pandemic and the Israeli medical negligence.