To resolve the Palestinian question we need to end colonialism 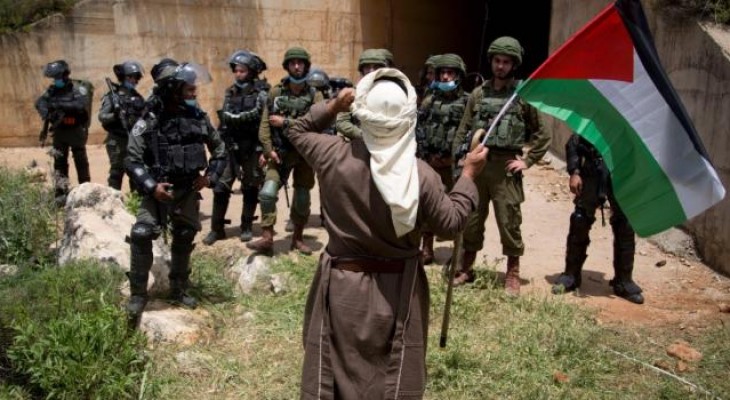 Amid a global pandemic, economic recession and simmering racial tensions around the world, Israel's threat to formally annex parts of occupied Palestinian territory presents yet another international crisis in the making. This is because, with this outrageous move, the Israeli government threatens to unravel the rules-based system of international relations.

Today's international law regime was established in the first half of the 20th century not only to regulate relations between states but also to assist the movements for self-determination across the world and oversee the end of colonialism.

The looming Israeli annexation of Palestinian land and the global inaction on it evidence the failure of this regime to help end colonialism and put its very raison d'etre in question.

No law for the powerful

Much of the narrative in international diplomatic circles around the issue of annexation has revolved around deterrence, with the rationale being the threat of tangible consequences to annexation will lead to a reconsideration of the move. Yet this narrative fails to acknowledge that we have reached a point, where Israel will annex yet another chunk of Palestinian territory precisely because deterrence has not worked. The threat of consequences has merely forced successive Israeli governments to innovate.

In fact, Israel has enjoyed wide-ranging impunity throughout the various stages of colonisation of Palestine as the international community has treated it as if it were a law-abiding sovereign state and not a colonising power. Israel's participation in the European Union's Horizon 2020 programme is just one example of this.

Israel, of course, is not alone in having expansionist ambitions. History is replete with examples of rapacious colonial states and the means, methods and justifications they have used in moving forward their colonial practices. In the vast majority of cases, these states have showed no self-restraint, requiring an external force (most often the drive for freedom of the oppressed colonial subjects) to challenge and subdue those ambitions.

It is for this reason that international law includes provisions that are supposed to curb expansionism. But while the legal framework exists, its enforcement mechanisms have been weak, which has only encouraged powerful actors to manipulate and break it. The continued colonisation of Palestine is a prime example of this.

From the early days of the occupation in 1967, Israeli officials were advised that the appropriation of property for the purposes of civilian settlements would be considered a violation of international humanitarian law which theoretically prohibits the practice of colonialism.

Nevertheless, they decided to exploit  provisions in the law of armed conflict which allow for the seizure of property when "imperatively demanded by the necessities of war" in order to provide an umbrella for the eventual development and expansion of Jewish settlements on Palestinian land.

When the Israeli High Court ruled against the appropriation of Palestinian private property in the 1979 Elon Moreh case, Israeli policy adapted to exploit Ottoman-era law to treat public lands as state lands and continue to expand its settlement enterprise through the distinction between public and private property in occupied territory.

Whether it was through the treatment of settlers as part of the civilian population in occupied territory or the justification of the exploitation of natural resources through royalty payments to the Israeli Civil Administration and employment for Palestinians, the Israeli judicial system has provided "legal" cover to Israel's broader colonial enterprise by exploiting another principle of the law of armed conflict, which allows changes to be made in occupied territory if they are made in the interests of the civilian population therein.

The economy of colonialism

Throughout its 80-year history, Israel has continued to refine the art of colonisation and put forward what could be considered the best business practices of colonialism.

The Israeli colonial project has many of the common colonial characteristics, such as supremacy, exploitation and entitlement, but it also has at least one distinguishing feature - its multinational corporate nature.

For example, Germany's Heidelberg Cement, one of the world's largest building materials companies, has been accused of profiting from the extraction of resources from Palestinian land illegally confiscated by Israel in the West Bank and the sale of construction materials to illegal Israeli settlements.

Thus, corporate considerations - direct and indirect economic benefits - have discouraged governments from taking political action to hinder the momentum of Israel's colonial project and thus both state and multinational corporate actors have contributed to its operation.

This incentive structure helps explain the Janus-faced response by the international community to Israel's colonial enterprise: its condemnation of Israel and insistence on the implementation of international legal provisions and its simultaneous willingness not to take any serious measures to stop it.

The problem is that decades of impunity have led many Israeli officials to believe that there is no longer even a need to bend international rules and seek a creeping de facto annexation and, with the backing of the Trump administration, they have now sought a de jure seizure of Palestinian land.

This has disturbed the delicate balance the international community has tried to maintain between the integrity of the international legal system and its inaction on Israeli violations, with the costs of this now potentially outweighing the benefits (including economic ones).

With 2020 marking the final year of the Third International Decade for the Eradication of Colonialism, it is time for the international community to realise that the current Israeli colonial practices cannot be separated from the history of colonialism.

Although international law was supposed to put an end to the practice of colonialism, it is clear that it has not yet finished the job. Colonialism can never truly be eradicated so long as the colonisation of Palestine continues.

If the international community wants to salvage the rule of law in international relations, it has to take concrete action. Its response to the threat of formal annexation cannot be merely trying to push back from the tipping point by threatening the sanctioning of Israel to prevent it from acting on its threats. This will simply allow it to slip back into its old strategy of de facto annexation.

July 1 may have come and gone in anticlimactic fashion, but Israel has shown its true intentions to the world and they cannot be unseen.

Therefore, the international community must address the underlying root causes that have brought about this threat by ending its reluctance to hold Israel accountable for its continued colonisation of Palestine and take tangible action now. That action should take the form of targeted sanctions aimed at the entire economic incentive structure feeding into, and flowing out of, Israel's colonial enterprise.

Without an external force acting against Israel's expansionist ambitions, the colonisation of Palestine will continue. If the function and the spirit of rule-based system of international relations is to be preserved, that force must be the force of law.