The UK must ban the import of goods from illegal settlements in the West Bank if the Israeli government presses ahead with annexation plans this week, Lisa Nandy, the shadow foreign secretary, has said.

The move would be a “major step” and require “courage that so far ministers have not been willing to show”, she told the Observer. But “such a blatant breach of international law must have consequences”.

Benjamin Netanyahu, the Israeli prime minister, has said Israel will “apply sovereignty” to up to 30% of the occupied West Bank as early as Wednesday, despite mounting international opposition and warnings that annexation would kill off a future Palestinian state.

Boris Johnson told MPs earlier this month that the UK government “strongly objected” to the plan and restated support for the two-state solution. But the government is coming under increasing pressure to take concrete action if Netanyahu’s annexation proposals are implemented.

Nandy said: “The proposal to unilaterally annex nearly a third of the West Bank is an illegal act which will undermine the prospect of a peaceful two-state solution for Israel and Palestine, and has serious implications for the stability of the Middle East.

“It is a shameful proposition to which the UK cannot be a silent witness. Across the world concern is growing … So far the UK government has been conspicuously absent from this global response.

“This is now urgent. The government must be clear with the Israeli coalition government that concrete action will follow, including a ban on goods entering Britain from the illegal settlements in the West Bank. This is a major step, but such a blatant breach of international law must have consequences. It will take a level of courage that so far ministers have not been willing to show.” 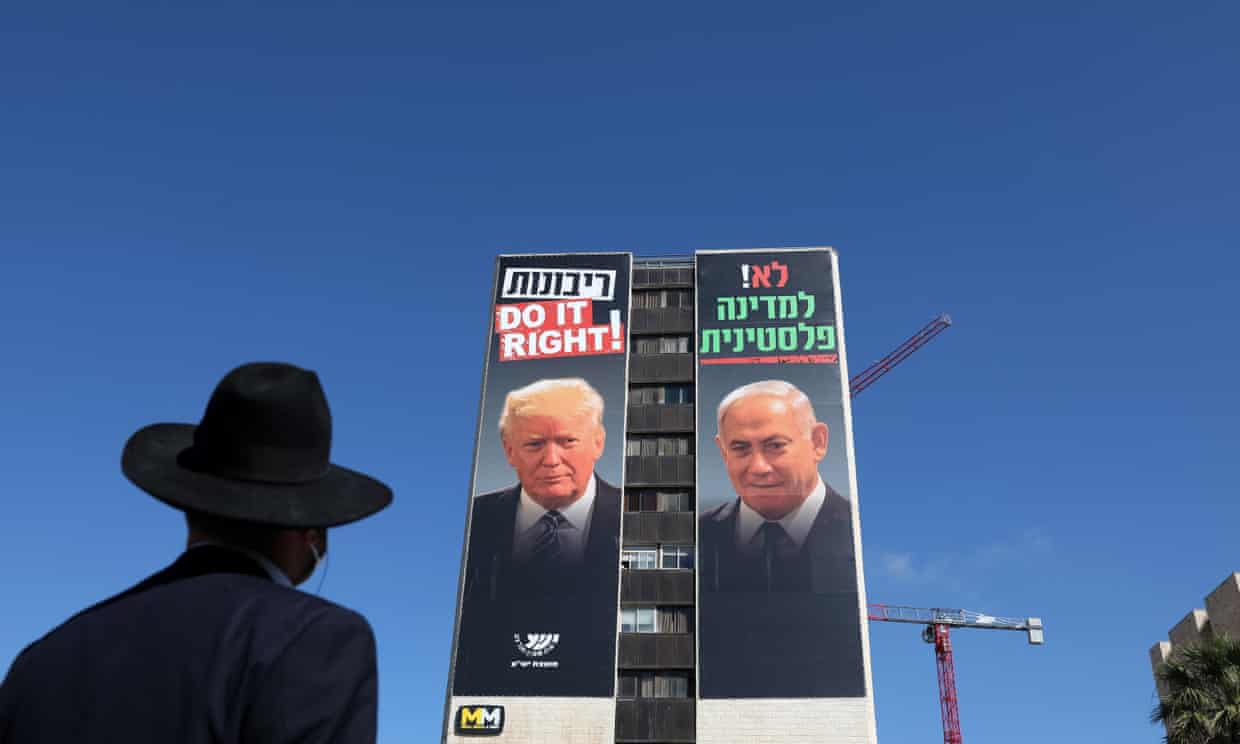 Israel’s annexation move is part of the US-backed peace plan, which Trump and Netanyahu called ‘the deal of the century’. Photograph: Abir Sultan/EPA

Nandy’s proposal, backed by Keir Starmer, is a significant toughening of Labour’s policy on Israel. In the 2019 manifesto, the party merely called for a diplomatic solution.

The Trump administration’s support for Netanyahu’s plan might discourage UK action for fear of jeopardising a UK-US trade deal, she added. But Britain had a “unique moral responsibility and must step up. Should we fail to do so, the world will pay the price for a long time to come.”

Last week, more than 1,000 European parliamentarians signed a letter opposing annexation, saying “acquisition of territory by force … must have commensurate consequences” and calling on European leaders to “act decisively”.

In a statement to be issuedon Monday, a coalition of UK-based humanitarian, development, human rights and faith organisations will demand the government outlines “clearly and publicly, what actual, meaningful consequences will result if Israel proceeds with its illegal annexation plans”.

William Bell of Christian Aid, which is a member of the coalition, said the UK should formally recognise the state of Palestine and “end all trade with illegal settlements” in response to annexation.

Sir Vincent Fean, a former British consul-general to Jerusalem, also called on the UK government to recognise the state of Palestine alongside Israel on pre-1967 borders.

He said the consequences of annexation for Israel should include banning the importation of goods produced in illegal settlements and sanctions similar to those imposed on Russia after its illegal takeover of the Crimea in 2014.

Crispin Blunt, a Conservative MP and former chair of the foreign affairs select committee, said the UK government “should have made clear [to Israel] there is going to be a price” for the annexation plan, with trade agreements between the two countries ended or curtailed.