Over 10 thousand citizens ask the EU to stop using Israeli drones against migrants! 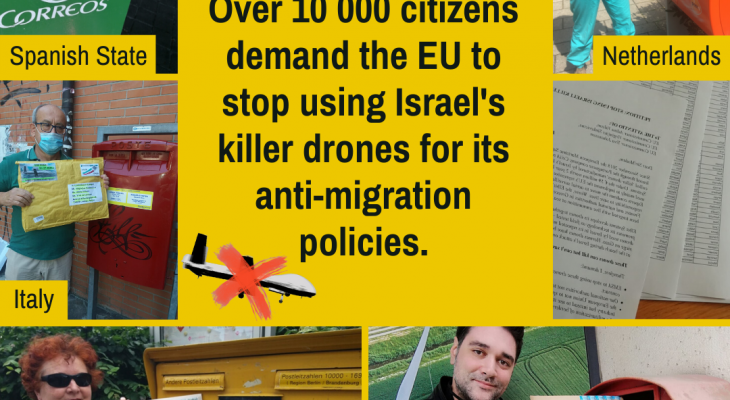 Over 10 000 citizens from all over Europe and beyond have signed a petition to demand an end to a drones deal between the European Maritime Safety Agency (EMSA) and Israel’s largest military company Elbit Systems. EMSA leases, through the Portuguese company CeiiA, two Hermes 900 ‘killer drones’. The €59 million deal started in November 2018 and is up for renewal within the coming months. The signatories also demand EU member states to refuse the usage of these drones in their airspace.

The ‘handover’ via mail post of the citizens’ petition comes after Members of the European Parliament have over the last months on several occasions denounced the deal and asked EU authorities for clarification.

Aneta Jerska, the coordinator of the European Coordination of Committees and Associations for Palestine (ECCP) said:

“European citizens demand #HealthcareNotWarfare from the European Union. Commissioner Valean stated that any further use of the drones will be evaluated "in view of the available budget".It is key for the EU to understand there is no budget for Israeli military companies.

The demand is ever more urgent in view of the impending de jure annexation of large parts of the West Bank by Israel, that run counter to international law and the EU’s long standing positions. Palestinians call for effective measures, including an end to military and security cooperation, and reminding the international community not to aid or assist the illegal situations created by Israel.”

Any renewal of the contract at this stage would be a green light for Israel to continue in plain violation of all international principles, including the right to self-determination and the inadmissibility of conquest of territory by force.

"It is outrageous for the EU to buy drones from Israeli drone manufacturers considering the repressive and unlawful ways that drones have been used to oppress Palestinians living under occupation for more than fifty years. It is also unacceptable and inhumane for the EU to use drones, however obtained, to violate the basic rights of migrants risking their lives at sea to seek asylum in Europe."

The EMSA contract fits into a pattern of increasing use of Israeli drones for European border security. In 2018 Frontex has launched a pilot project testing Israeli Aerospace Industries Heron MALE (medium-altitude long-endurance) drones that cost the EU €4.75 million for 600 hours of trial flights. This has lead to the current tender for MALE drones, which has been denounced by activists fighting the militarization of European borders and migration policies and because of possible bias for foreign manufacturers. Greece has in May signed a deal to lease two IAI Heron drones for three years. Switzerland purchased six Hermes drones in 2014.

The use of these drones contributes directly to the policy of militarization of migration policies and the Mediterranean, the EU spends taxpayers’ money on weapons while migrants in the refugee camps in the Greek islands,  the Mediterranean and the eastern borders of Europe lack even the most basic services. The shift from vessels to drones is part of the policy that leaves migrants to die at sea and engages in illegal pushbacks of migrants to the Libyan Coast Guards instead of conducting rescue operations.

The petition was endorsed by some Members of the European Parliament and has been promoted by a broad alliance of 46 civil society organizations from all across Europe, including Palestine solidarity, anti-militarization, migrant rights groups, unions and more. For the full list see: https://petition.stopthewall.org/