The Palestine Question in Europe 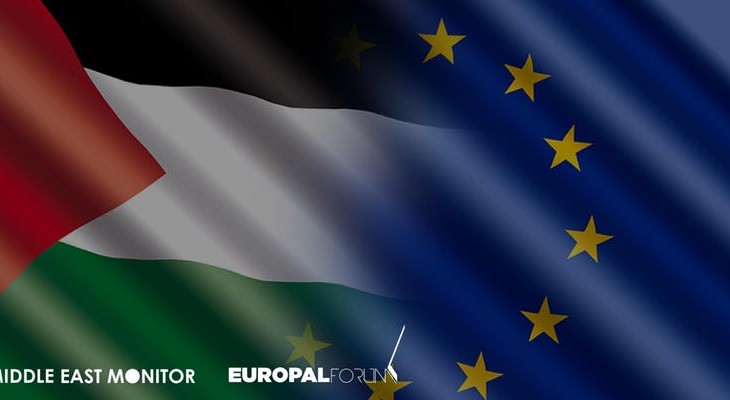 MEMO today co-hosted a one-day conference with the NGO EuroPal Forum on “The Palestine Question in Europe”. The event brought together an esteemed panel of speakers and experts on the Palestine-Israel question through the lens of Europe, in particular the EU’s foreign policy on core issues such as illegal Israeli settlements, Palestinian refugees, borders, security and Jerusalem.

EuroPal Forum Chairman Zaher Birawi welcome attendees and explained that events such as these are vital as a result of the “severe lack of mechanisms of assessment for understanding where the Palestinian issue is situated and understood across Europe”. The forum, he continued, was organised to bridge this gap and to facilitate a better understanding of Palestinian-European relations.

Birawi stressed that these endeavours come at the backdrop of “increasing attempts by Israel to intimidate, silence and tarnish” those working towards the attainment of Palestinian human rights.

The first of three panel sessions tackled the EU’s relationship with Palestine and Israel. Chaired by Professor Kamel Hawwash it included Dr Dimitris Bouris, Assistant Professor at the Department of Political Science at the University of Amsterdam who gave an historical overview on the European stance towards Palestinian statehood building.

He said there is a common position of the EU on matters such as settlements and human rights in the Israeli-Palestinian conflict, and revealed the extent to which it participated in the Oslo Accords, which was dominated largely by the US.

The division of parts of the territories into Areas A, B and C has made the mission more complex, he added.

Speaking on the same panel, Policy Fellow with the Middle East and North Africa Programme at the European Council on Foreign Relations Hugh Lovatt said the “EU also have a flip side where personal relations with Israel that go against international law and resolutions” are concerned, but it should also be holding the Palestinian Authority accountable for its actions.

Read the live blog from the day

Professor of International Law at Queen Mary University Neve Gordon argued that law is not the solution to the conflict and displayed maps of Jewish settlement expansion in the occupied Palestinian territories over the years before touching on the fact that although net migration from Israel into the West Bank has decreased since 1967, the natural growth rates have increased due to the larger on average households of Jewish settlers. The two-state solution is effectively over, he continued, we should now be working towards a viable one-state solution.

Lecturer Dr Catherine Charrett said the EU knows Hamas is not a terrorist organisation but continues not to meet with members of the group because it is working toward delegitimising the movement. The narrative that Hamas is a terrorist group is maintained in order to justify the continued occupation of Palestinian territories and isolation of the Gaza Strip, she explained. 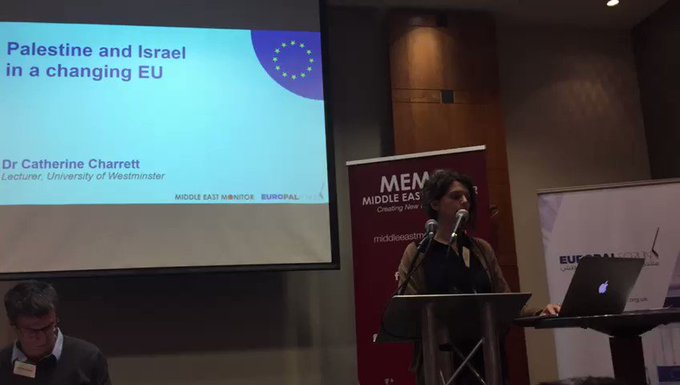 Building on this, Dr Atef Alshaer told attendees that “the name alone – Palestine – is a challenge to advocate for”. The surfacing of an increasing number of right-wing groups and governments, including the government of US President Donald Trump, diminish the rights of Palestinians and help boost Israel’s plans for the region.

“They use Israel as an example of a successful kind of country,” he continued, with Trump using the Separation Wall as a way to deal with an unwanted people.

Anti-Semitism is another weapon which the Israeli government has exploited, Antony Lerman, visiting Senior Fellow at the Bruno Kreisky Forum for International Dialogue in Vienna, said during the day’s final session “Assessing pro-Israel strategy in Europe alongside advocacy campaigns for Palestinian human rights”.

The result of the debates over whether anti-Zionism is anti-Semitism has been used “to freeze discussion over Palestinian rights”, Lerman continued.

Professor Ilan Pappe debunked the logic of those who equate criticism of Israel with anti-Semitism, saying that any Jew who also criticises the state must also be anti-Semitic by definition.

Judaism, he added, will not and should never be a form of nationalism; it is only a faith and religion. Judaism as nationalism, on the other hand, is a justification of the occupation of the Palestinian people and territories.

Watch the livestream of the conference

Dr Atef Alshaer at MEMO and EuroPal Forum conference The Palestine Question in Europe on 23 November 2019
Topics :
Tweets by @EuroPalForum