A new intifada for a new generation, By: David Hearst 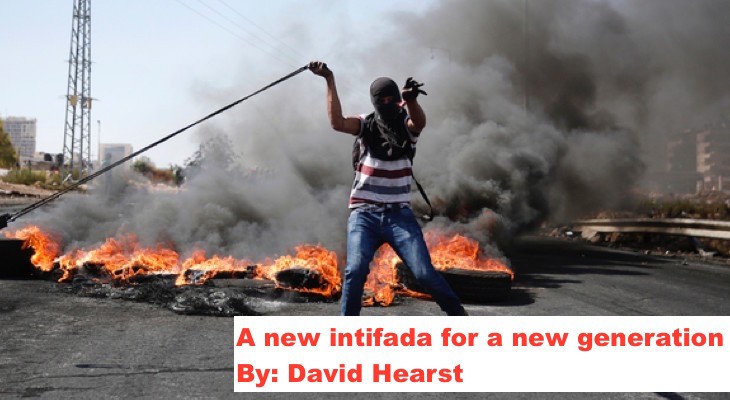 A few days before he stabbed and killed two ultra-orthodox Jews in the Old City of Jerusalem before being shot dead, Muhannad Halabi addressed himself on his Facebook wall to his president. Mahmoud Abbas had accused Israel in his UN speech of letting extremists into the Al-Aqsa compound.

“Nice speech Mr. President, but we do not recognise East and West Jerusalem. We know only that Jerusalem is one, undivided, and that every part of it is holy. Excuse me, Mr. President, but what is happening to the women of Al-Aqsa and to Al-Aqsa itself will not be stopped by peaceful measures. We were not raised to be humiliated.”

The 19-year-old’s message was clear: the time for words is over. The Third Intifada, he said, has already started.

Halabi speaks for his generation. He was born a year after the second Oslo Accord was signed in Taba, which set up an interim Palestinian self-governing authority for the West Bank and Gaza. By the age of four, Halabi should have seen a comprehensive peace agreement in which Israel would have ceded control of the territories in exchange for peace.

When Halabi was seven, Israel had begun constructing the wall that was to divide the West Bank into bantustans. By the time he was eight, Yasser Arafat had died, ridding Israel of a Palestinian leader it described as “two-faced”. He was replaced by Mahmoud Abbas, whose one face was, and is, implacably opposed to violence.

Halabi’s generation should have seen peace. It should have benefited from the plans of Tony Blair and Salam Fayyad to regenerate the economy of the West Bank. Instead, what this generation saw was 600,000 settlers, the gradual disappearance of Palestinian East Jerusalem, a Palestinian security force whose role was to stop protest and the daily encroachments of Israeli Jews, who defined themselves initially as tourists, in the Al-Aqsa compound. Instead of a final settlement, Halabi’s generation has experienced the final loss of all hope.

This then, more than the numbers of deaths or injured, or the phenomenon of stabbing attacks occurring all over the country, is what makes this an intifada - which in Arabic means "shaking off". A new generation is attempting to shake off its occupier. A new generation has rediscovered the struggle of its forebears. What happens in the following weeks, months or even years will become their struggle.

The spark for this is Al-Aqsa, a symbol which stone by stone is being attacked by the acid rain of Jerusalem’s sectarian politics. Despite the Chief Rabbinate’s prohibition on Jews entering the compound it knows as the Temple Mount, the status quo at Al-Aqsa is changing. The Waqf, the Jordanian-controlled Islamic institution administering holy places, no longer collects entrance fees nor can it ban non-Muslims from passing through the Israeli-controlled gate.

“While the Waqf continues to work with the police to enforce the Jewish prayer ban, it can no longer determine the size of Jewish groups or the rate of their entry; nor can it veto the entry of specific activists it considers provocateurs. Israel at times has allowed Jews to enter in groups of ten to 30, even 50, including in army uniform, which previously had been forbidden,” the International Crisis Group recently reported.

By 2012, Knesset members, deputy ministers and ministers were filmed declaring Israeli sovereignty over the entire site.

For Halabi’s generation this is not only a religious issue. Al-Aqsa is a symbol of national identity, the last symbol standing of an identity which has been so comprehensively trashed by the Israeli state. It unifies both religious and secular Palestinians. The first Palestinians to attack religious Jews over Al-Aqsa came from a secular revolutionary group, the Popular Front for the Liberation of Palestine, (PFLP). Defending Al-Aqsa from the encroachment of national-religious Jews is an existential issue. It tells all Palestinians: “If we don’t fight for this, we might as well give up.”

Halabi did not need to be incited. Nor did he wait for orders from Fatah or Hamas. He made his own decision as thousands of others are doing irrespective of whether they live in the West Bank, Gaza or Israel.

Both the First and Second Intifadas took the Palestinian leadership by surprise. The first was started when an Israeli army truck crashed into two vans carrying Palestinian workers, killing four of them. The second was ignited by Ariel Sharon, then in opposition, appearing at the Al-Aqsa compound with a thousand Israeli police officers and repeating the phrase that was broadcast when Israeli troops seized East Jerusalem in the 1967 Six Day War: “The Temple Mount is in our hands." But within days of each, the leadership asserted control and began giving orders.

Jamal Zakout, who wrote "Communique No. 2" on behalf of the Unified National Leadership of the 1987 Intifada reminded us of its purpose: "It considered the Intifada, its leadership, and its grassroots activism as an integral part of the PLO, not a substitute for it.” Today the PLO, under Abbas’s leadership, does not want to know, and for that very reason, struggles to control the situation.

A recent poll conducted by pollster and political scientist Khalil Shikaki found that 42 percent of Palestinians believed that only an armed struggle would lead to an independent Palestinian state, and 57 percent no longer believed that a two-state solution was possible. Two-thirds wanted to replace Abbas as president.

The new generation is making its own decisions in defiance of both Fatah and Hamas. If one picture encapsulates this, it was of a girl in jeans and a kuffiyeh handing rocks to a masked boy wearing a green Hamas headband. Secular and religious youth were at one in protest. Each and every youth who picks up a knife or throws a stone is their own leader.

This creates unique dangers for Israel. It can deal with groups by arresting or assassinating their leaders and eventually negotiating a ceasefire. It can not stop individuals from making their own desperate decisions. It can only provoke them more by resorting to house demolitions or other measures of collective punishment.

There are other unique factors about this intifada. The First and Second Intifadas were conducted from the West Bank and Gaza. The Palestinian citizens of Israel, who have been present since 1948, took part in protests at the start of the Second Intifada, but they were short-lived. Not since Land Day in 1976 have the Palestinians of '48 been at the forefront of popular protest. On 30 March 1976, thousands of Palestinians from the northern triangle region marched to protest the expropriation of huge tracts of land as part of an openly declared policy to "Judaise" the area.

Today however, no wall or separation barrier contains the uprising. The attacks of the last week have been taking place in areas the PLO has no control of - East Jerusalem, Afula, Tel Aviv. There are other factors. This is the first intifada where Palestinians are not looking for neighbouring Arab states to intervene. Perhaps it's a sign of the times or the chaos around Israel’s own borders.

So far, Israel’s reaction to the intifada has been to lose trust in Israeli Prime Minister Benjamin Netanyahu and back even more right-wing leaders. The latest poll published by the Yediot Ahronot daily on Sunday showed that 73 percent were dissatisfied with Netanyahu’s handling of the recent attacks. When asked who was best qualified to deal with them, two ultra-nationalists, former Foreign Minister Avigdor Lieberman and pro-settler Education Minister Naftali Bennett, came first and second. As foreign minister, Lieberman commissioned lawyers to examine plans for the so-called “static transfer” of Palestinian population of northern Israel to a Palestinian state.

But Israelis are also being encouraged to take the law into their own hands. Already a heavily armed society - in 2013 about 160,000 permits were issued for private citizens to carry firearms, and 130,000 for organisations - Israel is about to become more so. In Jerusalem this is with the explicit encouragement of mayor Nir Barkat, who along with his bodyguard disabled a Palestinian who had stabbed a Jewish man on the street. Afterwards Barkat was seen in the Palestinian neighbourhood of Beit Hanina with an assault rifle. Vigilante mobs have already appeared hunting for Palestinian workers on the streets of Jerusalem, planning their route to areas where Palestinian cleaning workers would be employed.

All the ingredients are there for a long and bloody struggle, in which countless innocents on both sides will be killed. If you like, Israel has discovered the secret that has eluded generations of physicists: the secret of perpetual motion. Every time its security establishment congratulates itself on having extinguished one intifada, another one comes. Each time the flame is rekindled by another generation’s personal experience of despair, hopelessness and indignity.

There is only one way out of this cycle of conquest, repression and resistance. It is for the Jewish Israelis to look themselves in the mirror and reconcile - as equals - with the people of the land that they now share. For one reason and one reason only. Palestinians are here to stay, one generation after another.