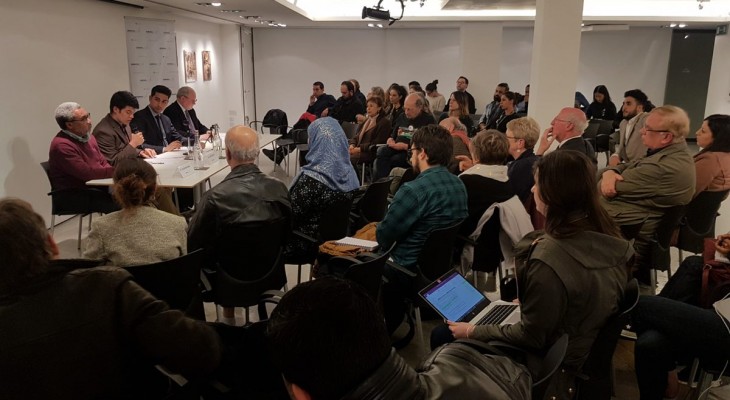 London - Europal forum has hosted an event on Hamas's politics and the future of Peace in Middle East.

Zaher Birawi, chairman of EuroPalForum said: Many politicians in UK realised that alienation of Hamas has not helped in promoting peace and dialogue in ME such as former Home&Foreign Sec. Jack Straw. Former PM Tony Blair met with Hamas leaders many times during last years,

Dr Daud Abdullah, director of MEMO said:" Consistent themes articulates the need of pluralism and inclusion of all political parties regardless of ideologies. It is an important display of recognition of the will of people."

"The gap between Fatah and Hamas is a gap created by the methodology of the political parties. One believes in right to resist, the other follows route of negotiations. Both parties not been able to find a formula for common methodology. This presents a block"

Dr Atef Alshaer he is a lecturer at University of Westminster said: "Hamas's new document had a certain positive reaction in taking Hamas out of the initial designation of being a terrorist organisation. Hamas cleared the accusations of anti semitism as they declared their struggle is against Zionism and not against Jews. Hamas holding firmly its position and principles regardless of the immense pressures against it, is a testimony to its maturity. Ignoring Hamas's efforts in trying to appease in its approaches and discourse leads to radicalisation."

Dr AzzamTamimi an Academic and broadcaster said: "Hamas came under immense pressure from its remaining allies including Tony Blair, who advised them if they say a word here or there, it might open doors. That didn't happen and the compromise did not open any doors.

He said also: "Hamas's best choice would have been to remain steadfast and not give an impression of a slightest compromise. You do not make compromises when you are under pressure. None of their compromises have worked."

Hamas seminar concluded with addressing audience's questions on the future of reconciliations between Fatah and Hamas, the role of neighbouring countries in furthering the difficult situation in Gaza and delivering US's game of monopoly and the impact of the deal of the century.