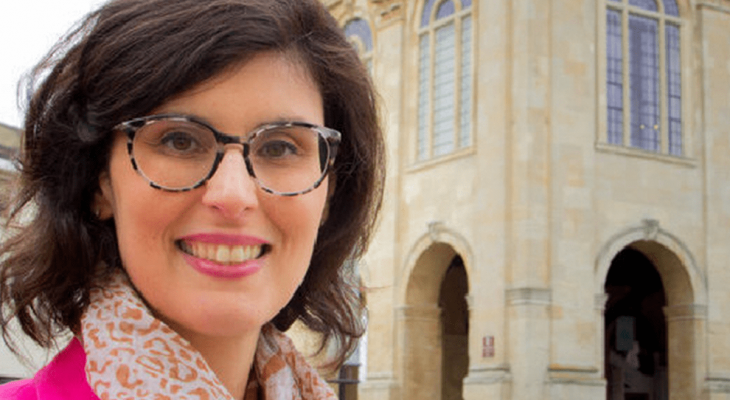 Britain’s first Member of Parliament of Palestinian descent is preparing for a historic debate on Friday to have the government give official recognition to the state of Palestine in what she says is probably the “most personal and poignant” piece of legislation she has submitted since arriving in Westminster.

Rising political star Layla Moran, a Liberal Democrat, sent shock waves through the ranks of the Conservative Party when she overturned a 10,000 majority at the 2017 General Election to take Oxford West and Abingdon which was previously regarded as a safe Tory seat. Now she’s making more waves with the second reading of her Private Members Bill this week to have Palestine recognised by Britain as a state.

Since Moran’s arrival in Westminster, occupied Palestine, especially the Gaza Strip, has endured some of the worst violence inflicted by the brutal Israeli occupation. In an article on Monday for The House, parliament’s in-house magazine, she wrote: “Just a few months ago, following the anniversary of the Nakba [the Catastrophe of the creation of Israel in 1948], horrific images of the dead or injured Palestinian men, women and children were everywhere. The violence was unjustifiable and unacceptable. My heart broke for Palestine and Palestinians. I have family there; it’s part of who I am.”

She went on to point out that US President Donald Trump’s “inflammatory” decision to move the US embassy to Jerusalem in the same period added to the acute feelings of injustice. “His decision and rhetoric served as a catalyst for the violence and to demonstrate his disregard for the peace process, the two-state solution, and Palestine.”

Moran, who is being tipped as a possible leader of the Lib Dem Party, explained that, “Watching from my still new position on the green benches I felt, and still feel, a responsibility to do all I can to help restore hope to Palestinians. I now walk through the halls of the place that implemented the Balfour declaration [sic] all those years ago and I believe that Britain has an obligation under that declaration. We have a historic responsibility to speak up. Peace can only be attained through a two-state solution but for as long as those two states are not equal it is unreasonable to put the responsibility of peace talks solely on their shoulders.”

Trump’s move of the US Embassy to Jerusalem was another stark reminder of the inequality between Israel and Palestine, she added. “It was also a reminder that the UK can and must use its voice, through the [UN] Security Council and all other platforms, to contribute towards a resumption of peace negotiations based on a two-state solution with Jerusalem as a shared capital. Not only do we have a responsibility to do so through our role in the Balfour declaration, but it is also the right thing to do.”

The article is extremely critical of the peace process which, she says, is “nowhere to be found” and she accuses members of the international community of ignorance if they don’t understand that the process is now “a fallacy”. Accusing extremists on both sides of hijacking the agenda she is critical of Hamas, claiming that the movement’s “presence is setting the dialogue back considerably.”

Last November Moran made more headlines with a scathing attack on Donald Trump when he plunged the UN Relief and Works Agency for Palestine Refugees (UNRWA) into a financial crisis by cutting Washington’s annual donation to the agency. As UNRWA’s largest donor state, this had a huge effect on the essential services provided to millions of Palestinian refugees, including education, healthcare and social services.

With America edging closer to imposing a “deal of the century” on the Palestinians, Moran insists that it is more important than ever for Britain to step up and use its influence and voice. “The UK can help restore a sense of hope for Palestinians, we can help bring the parties back to the negotiating table, and we can help level the playing field. But we can only do that if we recognise the state of Palestine. Saying that we believe in a two-state solution without recognising one of those states ourselves would be laughably hypocritical if it weren’t so damaging.”

In 2012, the UN General Assembly granted Palestine the status of a non-member observer state. To date, it has been recognised by 137 of the 193 countries in the world which are UN members.

According to Moran, her bill will pave the way for Palestine’s long “overdue recognition” as a state by the British government. “I am Palestinian,” she concludes. “There is a Palestinian state, and it is time for the UK to recognise that.”

Moran’s mother, Randa, is a Palestinian Christian from Jerusalem and the MP still has family living in the West Bank city of Ramallah. Her British father’s diplomatic career took the family all over the world. She speaks four languages as well as English — French, Arabic, Spanish and Greek — and is not the only one in her family to enjoy a high profile. Her great-grandfather, Wasif Jawhariyyeh, was a celebrated writer who wrote extensive memoirs about Palestinian life under Ottoman and British rule, before fleeing Palestine after the State of Israel was created.

The 36-year-old’s performance on Friday will be scrutinised closely by the Palestinian Ambassador in London, Dr Husam Zumlot. He told MEMO last year that the forthcoming debate on statehood will create the right atmosphere for a “just peace” in the Middle East as an entry point to discussion and an incentive to peacemaking. Before moving back to London where he studied for his PhD, Zumlot was the Palestine Liberation Organisation’s main diplomat in the United States until, last September, the Trump administration closed the PLO’s office in Washington as part of an effort to block moves against Israel at the International Criminal Court.

Should her Private Member’s Bill succeed it will be extremely poignant that Palestine’s statehood is recognised thanks to a British Palestinian legislator in Westminster, where the controversial declaration was penned by Lord Arthur James Balfour in 1917. Is it an omen that Layla Moran entered parliament in the centenary year of Balfour’s letter to Lord Walter Rothschild promising British support for a “national home for the Jewish people” in Palestine? We will know if it is on Friday.