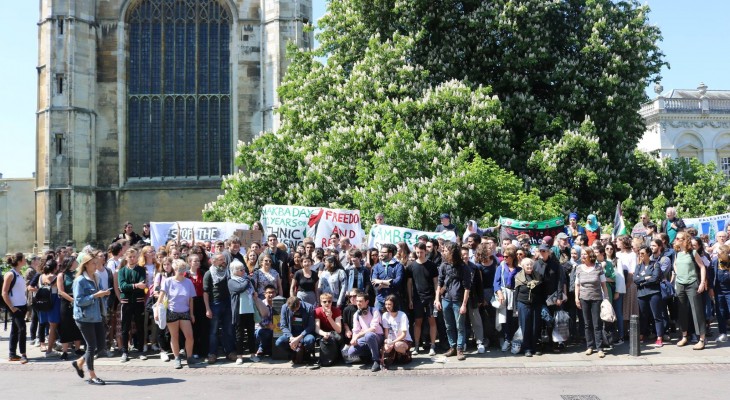 A wide coalition of Cambridge University student groups called on the university to end its partnership with major arms producer BAE Systems and Caterpillar Inc. due to the companies' role in enabling violations of international law by Israel, Turkey, and Saudi Arabia

University of Cambridge: end your partnership with Caterpillar Inc. and BAE Systems!

We, the undersigned, call on the University of Cambridge to immediately terminate its partnership with Caterpillar Inc. and BAE Systems, as part of the Cambridge Service Alliance. By maintaining this relationship, the University has made itself, and us, shamefully complicit in war crimes. These companies have been essential in enabling major violations of international law by the states of Israel, Turkey, and Saudi Arabia.

On the 14th of May in Gaza, Israeli soldiers killed 62 Palestinians with live ammunition, wounding thousands of others, as they demonstrated for their internationally recognised rights (under UN Resolution 194) as refugees to return to their homes.

Israel has a long and brutal history of such violations of international humanitarian law in occupied Palestine. House demolitions, extrajudicial assassination of unarmed civilians, and settlement construction are all recognised as gross violations of the Fourth Geneva Convention of 1949 (Geneva IV), which prohibits the destruction of property, murder, disproportionate use of force, and the forcible transfer of populations by the Occupying Power. Britain as a signatory of this treaty has an obligation to ensure respect for its implementation, especially in terms of grave breaches (war crimes) by other signatories. Israel’s transfer of hundreds of thousands of its citizens as settlers into the West Bank are also grave breaches under Geneva IV. These are all, under the International Criminal Court’s (ICC)statute, considered war crimes.

BAE Systems is central to British arms sales to Saudi Arabia, supplying the regime with the Tornado and Typhoon fighter jets which are used to indiscriminately bomb civilians in Yemen, flattening schools and hospitals, and destroying families.

They also supply hundreds of millions of pounds worth of military equipment, including fighter jets, to the Turkish state, whose recent assault on Afrin in Northern Syria saw the indiscriminate shelling and bombing of Kurdish civilians, killing more than 500 and displacing thousands, in the space of weeks. This followed the brutal massacres by Turkish government forces in 2016, of hundreds of civilians, enforced disappearances, torture, the displacement of up to half a million people, and the systematic destruction of housing in Kurdish towns and cities across southeastern Turkey such as Cizre, Nusaybin and the Sur district of Diyarbakir, highlighted by the UN High Commission for Human Rights’ in its report. This destruction was significantly enabled by military equipment and technology directly obtained through recent contracts with BAE.

BAE also provides the targeting displays in F-16 fighters jets, which Israel used extensively in its attack on Gaza in 2014, killing over 1400 Palestinian civilians, a third of them children.

The University of Cambridge maintains a close relationship with both BAE Systems and Caterpillar Inc. through the ‘Cambridge Service Alliance’. Set up in 2010, the programme is dubbed “a unique global alliance between leading businesses and universities”, working together to research innovation in the services sector. Vice Chancellor Stephen Toope sought to justify these partnerships, at an open meeting on Tuesday 15th May, by pointing out that they do not pertain directly to military equipment production.

This is not good enough. BAE Systems and Caterpillar Inc. supply essential products and services to the perpetrators of war crimes, facilitating the killing of thousands of Palestinian, Kurdish and Yemeni civilians. As members of the University of Cambridge, students and staff alike, we are deeply ashamed that our institution maintains such large and active links with corporate entities trading in mass murder and human misery. For as long as these links continue, Cambridge cannot fulfil its pretensions to being ethically responsible, or a social leader.

In 2005, over 170 Palestinian civil society groups called on us, citizens of conscience around the world, to boycott the Israeli state and those corporations complicit in violations of international law, in solidarity with the Palestinian people’s struggle for freedom, justice and equality. Kurdish activists have also recently begun to call on global civil society for boycotts, sanctions, and divestment from the Turkish state.

We demand that the University of Cambridge honour its ethical responsibilities by immediately terminating the participation of Caterpillar Inc. and BAE Systems in the Cambridge Service Alliance, and cease all institutional links with both companies until they end their role in such terrible violations of international law.

The Beard Society — Peterhouse Society and Platform for Feminist Discussion

Professor Simon Schaffer, Department of History and Philosophy of Science

Dr Mary A Brazelton, Department of History and Philosophy of Science

Dr Joshua Nall, Department of History and Philosophy of Science