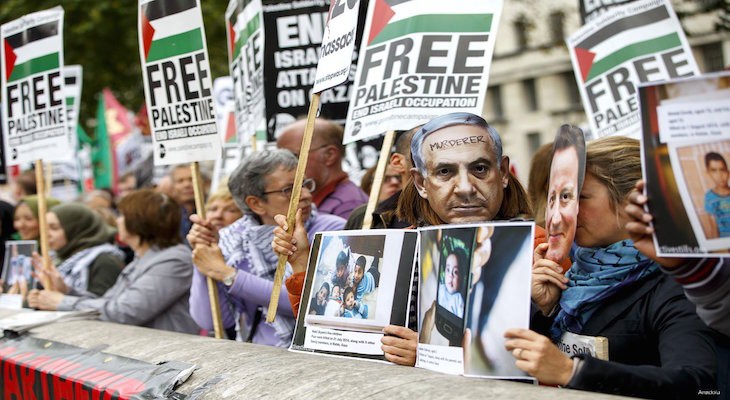 The policies of Prime Minister David Cameron and his government have turned the UK into a safe haven for war criminals who are granted immunity during their visits to exercise their political, security and military activities contrary to international law, the Arab Organisation for Human Rights in UK said yesterday.

The organisation added in a statement: “After the shameful visit of Israeli Prime Minister Benjamin Netanyahu to the United Kingdom which faced strong protests, the British government allowed Israeli security and military companies to participate in the London arms expo, at the ExCel centre, which opened on Tuesday and will last for three days.”

The organisation pointed out that reports prepared by the parliamentary committee which supervises military cooperation and arms exports has always recommended restricting military cooperation with a number of countries, including Israel, based on their disturbing record of human rights abuses. However, the reports have been ignored by the British government despite the presence of mounting evidence that these weapons have been used and continue to be used to commit war crimes, AOHR UK said.

The organisation pointed out that the Israeli companies which manufacture various weapons and test them on the ground by killing Palestinians - as was the case last during last summer’s war against the Gaza Strip which led to the death of 2,260 Palestinians, the majority of whom were women and children – are the same companies that are participating in the expo.

“The British government allowed those companies that have contributed to shedding Palestinian blood and strengthening the Israeli occupation’s forces in the occupied territories to participate in the exhibition which reflects the government’s disregard for international law that criminalises cooperation with these companies under any pretext,” the statement said.

AOHR UK called on the British government to review its military policy which is based solely on achieving interests at the expense of human rights.

Adding that it calls on the public prosecutor to open an investigation into the activities of the Israeli companies participating in the exhibition, in particular Armament Development Authority - commonly known as Rafael - over its role in the crimes committed against Palestinians.