Trump's Jerusalem promise: Time for Europe to lead for peace in the Middle East 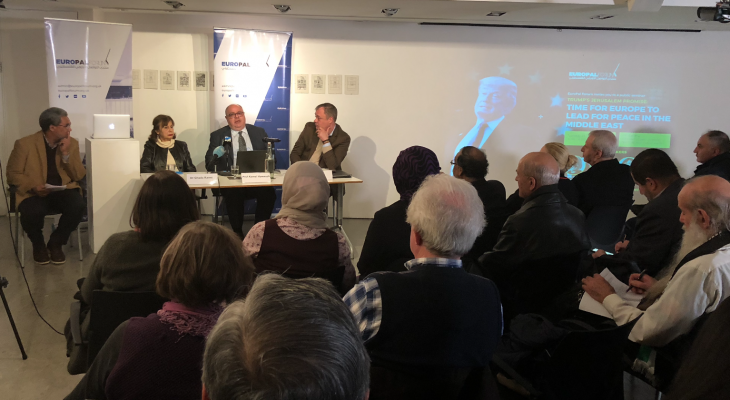 EuroPal Forum held a seminar on Tuesday 23rd January 2018, to discuss the recent escalations on the US Embassy Jerusalem move. This timely seminar was titled: "Trump's Jerusalem promise: Time for Europe to lead for peace in the Middle East”.

The US president’s decision to recognise Jerusalem as Israel's capital and move the US embassy from Tel Aviv to Jerusalem is an unprecedented step that has led to alarming repercussions in the region. Arab, Muslim and European leaders called this recognition as “dangerous” and violates both international law and UN resolutions.

The seminar was opened by Dr. Daud Abdullah, Director of Middle East Monitor, stressing the importance of this seminar and other Palestinian and international events that seek support to the Palestinian crisis in light of the great American bias towards the occupation state and in light of the continued struggle of the Palestinian people. He highlighted that the seminar is intended to shed light on the political prospects for solving the Palestinian issue in the light of the US administration's decisions on Jerusalem and the UNRWA agency and to discuss the possible European role in reviving the settlement process on new bases in a more balanced manner that will help achieve peace in the Middle East.

Speaking at the seminar via a recorded video message, Julie Ward highlighted that since U.S. President Donald Trump’s decision to recognise Jerusalem as the official capital of Israel , there has been an escalation in violence by Israel’s occupying forces against the Palestinians.

She also added that the European Union should take practical steps to contribute to the solution of the Palestinian issue, by reviving the peace process based on the principle of two-state solution, which is still considered by Europe to be the best solution.

The first speaker on the panel was Toby Cadman, the international law lawyer who argued that the Trump Declaration gave legitimacy to act in contrary to the international humanitarian law and gave the green light to speed up and expand some of these fundamental violations. This in turn is the most serious consequence of this declaration.

The second speaker, Dr. Ghada Karmi, a Palestinian academic and writer, stated that with the latest decision, the U.S. administration “has made very clear that Israeli and U.S. interests are identical”.

“And therefore, the gloves are off. It is very clear that the U.S. not only isn’t an honest broker, it is not an independent broker, but it is totally identified with Israel,” Karmi said.

Karmi pointed out that as the EU plays a role in both sides, the Israeli and Palestinian, the security of Israel and the Palestinian right of determination, it is an ideal body to play the role of the peace-broker.

The floor was then handed to Professor Kamel Hawwash, an academic from Birmingham University and a writer, who pointed out the clear US bias toward Israel. Meanwhile, he paid tribute to the European Union stance, which rejects the Trump decision on Jerusalem, and considered it a very important European step that should be made. But he added that things do not necessarily follow the Palestinians' desire because they are the weakest party.

“The EU can actually escalate the distinction through an action to do with settlements, it must be about imposing some sort of sanction.If I am denied entry as a British citizen to Israel, why is it that Israeli settlers are allowed to come in?” Hawwash said.

According to EuroPal Forum chairman Zaher Birawi, the Palestinians must think outside of the fruitless negotiation box that has achieved nothing for them. “They must prepare to deal with Israel as an occupying state, which international law gives them the right to resist in order to restore their national rights.” This option, he insisted, will make negotiations important and give the Palestinian leadership true value by forcing the Israeli occupation authorities to respect their position.

EuroPal Forum is a non-profitable and independent organisation calling for the rights of Palestinians to freedom and justice. EuroPal Forum aims to build positive networks between Palestine and European countries.  It aims to promote the correct narrative of Palestine cause throughout Europe.