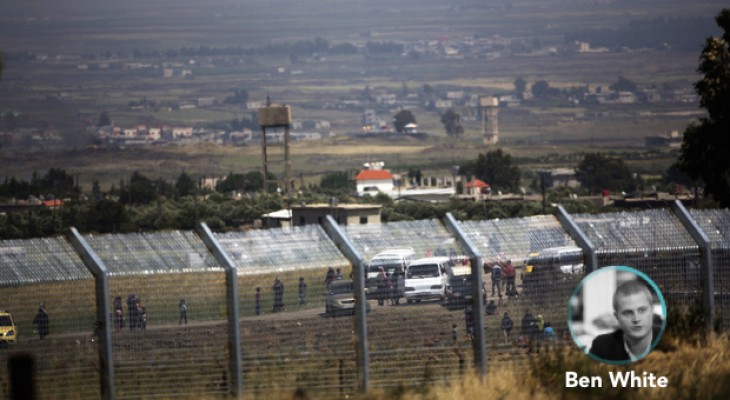 Long before Syrian refugees found their way to Europe, the war-torn country’s neighbours have been hosting a staggering number of displaced persons – with one notable exception.

Syria has five neighbours: Turkey, Lebanon, Jordan, Iraq, and Israel (with the latter occupying the Golan Heights since 1967).

Israel, however, with a GDP per capita almost double that of Turkey and five times as much as Jordan, has not accepted a single one.

This is unlikely to change any time soon. On 6 September, Israeli Prime Minister Benjamin Netanyahu rejected the idea of accepting any Syrian refugees, stating: “Israel is a very small state. It has no geographic depth or demographic depth.”

The day before, former finance minister and Yesh Atid chair Yair Lapid expressed similar sentiments, arguing that Israel “cannot afford to get into the matter of the refugee crisis” since to do so, he added instructively, could “open a back door to discussing the right of return for Palestinians”.

Senior Palestinian officials, meanwhile, are urging Israel to permit Palestinian refugees from Syria to come to the Occupied West Bank and Gaza Strip.

An estimated 3,000 Palestinians have been killed in Syria since the start of the uprising. Around 80,000 of the 560,000 UNRWA-registered Palestinian refugees in Syria are no longer in the country. Yarmouk camp, once home to some 200,000, now has 5-8,000 civilians remaining. In the devastated camp, many still rely on food parcels, and over-stretched doctors are treating cases of typhoid.

On Monday, the PLO’s Hanan Ashrawi reiterated a call made by Mahmoud Abbas for “the international community, in particular the United Nations, to support our efforts to bring the Palestinian refugees to Palestine".

Netanyahu’s comments at Sunday’s cabinet meeting were sparked by an intervention on Saturday by Zionist Camp head and Labor chair Isaac Herzog. Speaking on Channel 10 television, Israel’s opposition leader said it was “incumbent on Israel to take in refugees from the war”.

“Jews cannot be apathetic when hundreds of thousands of refugees are searching for safe haven,” Herzog added. Except, of course, if they are Palestinian refugees.

Herzog has been very direct about his desire to “keep a Jewish state with a Jewish majority.” Speaking at a conference in June, he stated: “I don’t want a Palestinian prime minister in Israel. I don’t want them to change my flag and my national anthem.”

Tzipi Livni, his Zionist Camp partner, sings a similar tune, defending the creation of a Palestinian “state” (read Bantustan) in order to “preserve the Jewishness of Israel’s Jewish and democratic state model” and “avoid the statistical demographic issue of Palestinians outnumbering Israelis”.

Many were recently appalled by Hungarian PM Victor Orban’s well-publicised remarks that the Syrian refugees “represent a radically different culture” and, purely because they are mainly Muslims, constitute a threat to “European Christianity”.

Few are aware, however, just how routine such rhetoric is in Israel, amongst cabinet ministers, lawmakers, academics, commentators and others. One Israeli journalist, explaining why “Israel can’t take in refugees,” put it like this:

The demographic threat is real, and the need to preserve the Jewish nation state's character as a democracy doesn’t allow for large minorities. The current numbers of Muslims pose a complicated challenge even without additions.

For Israel’s Palestinian citizens, this discourse is par for the course, from newspapers discussing a “demographic intifada” to political leaders, like Netanyahu in 2010, declaring that a Negev “without a Jewish majority” would pose “a palpable threat”.

Israel’s settler-colonial anxiety goes largely unquestioned in the West. While The New York Times was scathing about Orban’s rhetoric, the paper uncritically noted the perception of “most Israeli Jews” that the Palestinian refugees’ return would be a “demographic death warrant”.

It is not just Palestinians. In 2012, after African refugees had entered Israel via the country’s border with Egypt, Netanyahu warned that “illegal infiltrators” could threaten the country’s existence “as a Jewish and democratic state”. Tel Aviv saw anti-African mob violence.

Even if, as some acknowledged, the new arrivals meant no harm, their continued migration had “the potential of destroying the State of Israel.” Israel, it was frankly explained, is “a country living in constant worry over its demographic balance, and determined to maintain its Jewish character”.

A “steel and barbed-wire fence on the Egyptian border” has since reduced the number of Africans entering Israel “from several thousand a year … to almost zero”. Meanwhile the 50,000 refugees who remain, mostly from Sudan and Eritrea, are targeted for removal.

Lapid’s comments point us in the right direction: Israel is unable to accept (non-Jewish) refugees because it was only through turning the majority of the indigenous Palestinian population into refugees that a “Jewish state” was established – and it is maintained by their continued exclusion.

Earlier this week, Netanyahu told European Council President Donald Tusk that Israel is the region’s “only vanguard of liberty,” adding: “We are the guardians of civilisation here in the heart of the Middle East against this new barbarism.”

This colonial ideology of exceptionalism, exemplified by the oft-repeated “only democracy in the Middle East” cliche, finds an uncomfortable echo in Israel’s refusal to accept Syrian refugees, even as its neighbours host them in their millions.

On Sunday, Netanyahu announced the start of construction of a 29-kilometre stretch of fence along Israel’s border with Jordan, just the latest barrier for a state of external and internal borders, segregated spaces and settlements.

Just as the Syrian refugees are the result of an international political failure, so too the Palestinian refugees’ exclusion from their homeland, an absence created and enforced by the barrel of a gun and a bureaucracy of apartheid, is the result of the failure to confront Israeli ethnocracy.