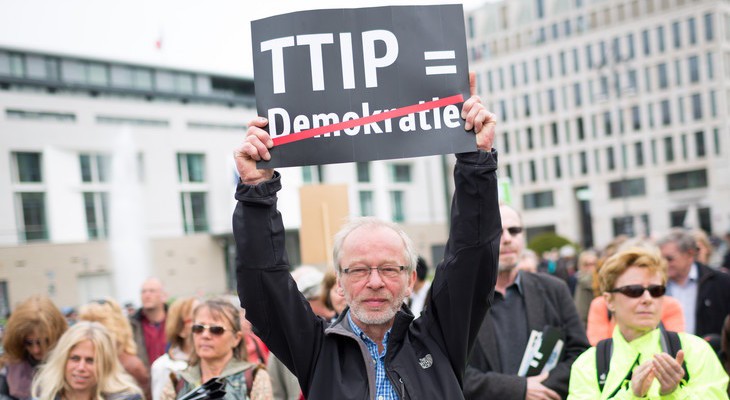 More than 150 organisations from across Europe are vowing to resist efforts by the United States to stifle campaigns for Palestinian rights by means of a controversial trade deal.

The trade unions, civil society and solidarity groups say in a letter published this week by the campaign group War on Want that they “oppose the dangerous Transatlantic Trade and Investment Partnership (TTIP) negotiations and the related attempts by some US politicians to use the TTIP process to restrict freedom of political expression and campaigning in solidarity with the Palestinian people’s struggle for freedom, justice and equality.”

The TTIP talks – which follow an agenda prepared by corporate lobby groups – are an attempt to harmonize many environmental and social regulations between the US and the European Union. Green and labor rights campaigners fear it will lead to a weakening of standards on such issues as food safety, public health and pollution.

In June, US President Barack Obama signed into law a bill that makes it one of his country’s “principal negotiating objectives” for TTIP “to discourage politically motivated actions to boycott, divest from or sanction Israel and to seek the elimination of politically motivated non-tariff barriers on Israeli goods, services, or other commerce imposed on the State of Israel.”

The law specifically extends this US discouragement of boycott, divestment and sanctions (BDS) to include “Israeli-controlled territories,” a ploy to dissuade the EU from steps under consideration to label products from Israeli settlements in the occupied West Bank.

After Obama signed the bill into law, however, his administration indicated that it would do nothing to protect settlement products from boycotts.

The State Department argued that by “conflating Israel and ‘Israeli-controlled territories,’” the anti-BDS provision “runs counter to longstanding US policy.”

“This does mark something of a shift,” Josh Ruebner, policy director of the US Campaign to End the Israeli Occupation, noted in an analysis for The Electronic Intifada.

Previously, the State Department had been adamant that the US unequivocally opposed any and all boycotts, even of goods from Israeli settlements.

Nonetheless, there is no doubting the Obama administration’s commitment to fight BDS in general, which is likely only to increase in its final year in office.

As Obama seeks to placate critics of the agreement over Iran’s nuclear energy program, he has given ever more concessions to the Israel lobby over Palestinian rights.

Hillary Clinton, who is seeking the Democratic Party nomination for next year’s presidential election, has also vowed to fight BDS.

Several EU governments have expressed an equally firm commitment to stand against efforts by Palestinians to win their rights.

But grassroots groups in Europe are ready to push back.

The signatories to the letter declare: “In the wake of Israel’s 2014 attack on the Gaza Strip, which killed more than 2,200 people and included deliberate attacks on civilians that amounted to war crimes according to the UN and other bodies, people around the world came out in numbers to express support for the Palestinian struggle for freedom, justice and equality. We will not accept any legislative attempt to silence these expressions of solidarity.”

In addition to dozens of Palestine solidarity groups, the signatories include such organizations as Friends of the Earth International, Stop TTIP Ireland and the Italian Forum for Water Movements.

As the letter notes, TTIP is generating opposition not only because of its implications for Palestine but because it would see “an unprecedented transfer of power to corporate interests and represents a serious attack on democracy, social standards, workers’ rights and environmental regulations.”