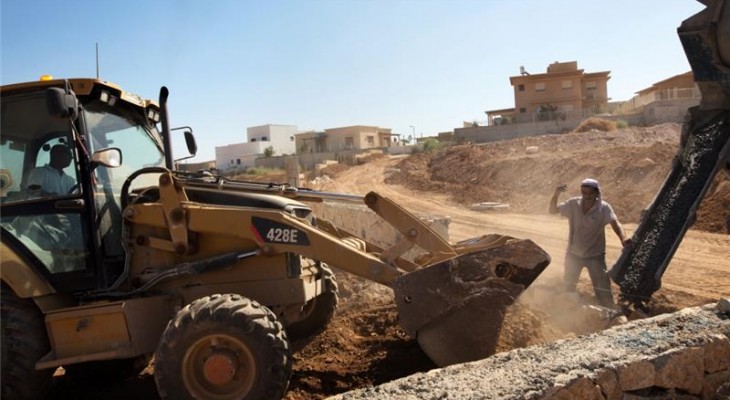 On July 31, 18-month-old Ali Dawabsheh was burned alive in an arson attack on his family's home carried out by Israeli settlers in the Palestinian village of Douma in the West Bank. His father, Saad Dawabsheh, succumbed to his wounds from the arson attack on August 8.

Israeli and Western media were quick to frame the murder of the Palestinian toddler as an attack by Jewish extremists. The condemnations flowed one after the other, and the European Union called on the Israeli authorities to show zero tolerance for settler violence and to protect the local Palestinian population.

It is exactly at this intersection where irony hits the tragedy of the Palestinians so dramatically.

The EU is tacitly mandating the Israeli army - the occupier - to impose a system of governance that would benefit the people it occupies, while simultaneously - and for decades - providing full tolerance of Israel's systematic policy of settlement expansion.

Although the International Court of Justice has ruled that Israeli settlements in occupied Palestinian territory are illegal, Israel's biggest trading partner, the EU, has failed to impose any trade restrictions to reprimand future settlement building.

Today, 125 government-approved settlements and 100 unofficial ones are home to 547,000 Israelis in the West Bank.

While Israel annexed East Jerusalem decades ago, it has stimulated the settlement of an additional 200,000 Israelis in 12 neighbourhoods, which should become part of the future Palestinian state.

However, this is just the beginning of this dichotomy.

Almost a tenth of Israel's citizens live in the Palestinian occupied territories - outside Israel's recognised borders.

International vernacular refers to them as Jewish "settlers", a synonym of the word "colonist", to deliberately distinguish those living in occupied territories outside of Israeli's borders from citizens living within, although they all fall under the same flag that actively implements Israel's colonial quest.

The number of Israeli settlers in the West Bank has been growing four times faster than that of Israel's citizens.

Settlers migrate to Israel, and from there, they can choose to settle in the West Bank, taking advantage of their Jewish privilege.

Israeli settlers perceiving themselves as the rightful inhabitants of the land is one corner of a curtain pulled slightly back to expose Z ionism's perversion of Judaism, which is used to justify settler and colonial tendencies.

A continuous flow of settlers is needed to face the Palestinian "demographic problem", as Israel's Prime Minister Benjamin Netanyahu refers to it.

The Israeli discourse has normalised the Palestinian demographic threat to the extent that numerous laws and policies, with racist undertones, have been legalised with the aim of containing and isolating the non-Jewish population in historical Palestine.

The establishment of more settlements is illegal and a major obstacle to justice for Palestinians, in addition to the mere presence of these settlers in these areas.

Israel's demographic race rotates around one premise: How to end this Palestinian threat?

The contemptuous answer is that it won't.

Israel's political and social goal to be a fully "Jewish State" will keep Palestinians labelled as an existential problem, even those who carry its citizenship.

Within this framework, it is imperative for the West to understand that migration of their citizens to Israel has morbid consequences for the native population, the Palestinians.

With the exponential growth of Israeli settlements in the occupied Palestinian territories, more settlers are needed to fill the newly built homes on stolen land.

Israel has exploited its recruitment mechanism, and the number of "olim" - the Hebrew word for immigrants - absorbed by Jewish agencies to settle in Israel hit a 10 year high in 2014, with an average increase of 40 percent from 2013 to 2014.

All of these new immigrants in Israel are dual passport holders, and can settle anywhere in Israel or in settlements in the occupied West Bank.

The Jewish-Zionist recruitment agencies, which legalise and allow this process, are located in all main European, American, Canadian, Australian, and other Western cities.

For instance, the Jewish Agency for Israel has seen a 190 percent spike in Ukrainians looking to immigrate to Israel, with economic reasons being the main motive.

While these new settlers can take advantage of their religion and race for a better life, as Jewish rights supersede Palestinian rights, more than five million registered Palestinian refugees, with 1.5 million of them in neighbouring countries, have been waiting for 70 years to return to their homes.

The Zionist equation remains the same: The arrival of a new immigrant means the disappearance - physically and metaphorically - of the Palestinian.

Additionally, current diaspora ministry Director-General Dvir Kahana and Diaspora Affairs Minister Naftali Bennett - who claimed to have killed lots of Arabs in his life and has no problem with it - gave "special, accelerated approval" to a company called "Initiative for the Future of the Jewish People", to implement a diaspora affairs ministry programme which aims to enforce a connection between Jews in the world by linking their Jewish identity to the State of Israel.

Bennett is Netanyahu's coalition partner in the current Israeli government, and hence these settlement policies, which are in a steady recruitment mode, are formulated in Tel Aviv, the main body behind Israel's expansionist enterprise in the West Bank.

More than 11,000 settler attacks have been perpetuated with full impunity since 2004, leading to a 165 percent increase in the weekly average of settler violence resulting in Palestinian casualties and property damage, including to homes, mosques, and churches.

The recruitment of more settlers for more of these illegal settlements results in crimes carried out against Palestinians as Europeans and Americans institutionalise the occupation. It is without a doubt that burned Palestinian toddlers will continue to pay the price.

Israel - its government, army, and settlers - are one and the same loose cannon.

One cannot differentiate between the murder by an Israeli sniper in Ramallah of 16-year-old Laith Khalidi, who bred rabbits and loved to play football and the piano, or Majdi al-Muhtaseb, who was handcuffed and beaten by Israeli soldiers in Hebron and then forced to drink petrol.

On November 2014, 32-year-old Youssef al-Ramouni was found hung in the bus he was supposed to be driving in a district of Jerusalem close to Jewish settlements.

Just a month earlier, 5-year-old Einas Khalil died after being hit by a car driven by an Israeli settler near the town of Sinjil.

None of the perpetrators have been brought to justice, as settlers have, for decades, run rampant due to a system tailored to facilitate these terror attacks - the same system that empowered and enabled the murder of 530 children in the Gaza Strip in the July 2014 assault.

The affirmation and support these settlers need come from political leaders who transform expansionist ideologies into facts on the ground.