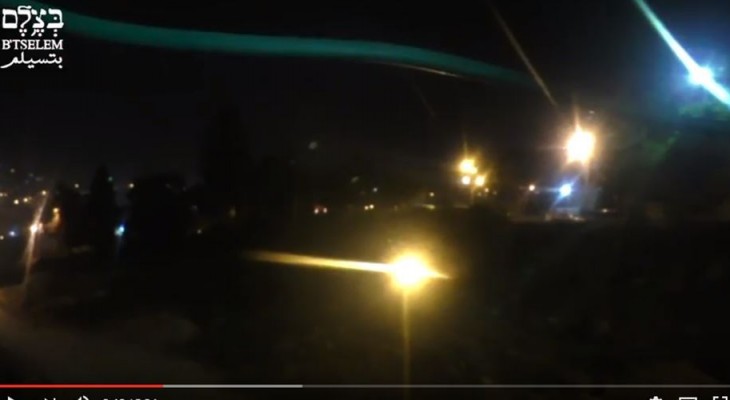 Settlers from the settlement of Kiryat Arba approached the neighborhood of al-Hariqah in al-Khalil city in the southern West Bank last Thursday night and used a loudspeaker to curse Prophet Mohammad (peace be upon him) and Islam as well as the local Palestinian population, in both Arabic and Hebrew.

A Palestinian volunteer for Israeli human rights organization B’Tselem documented parts of the incident from the window of her home. When the settlers realized she was filming, they began cursing and sexually harassing her using racist and misogynistic language. According to the volunteer, soldiers who were present at the scene did nothing to stop the settlers.

The PIC obtained a version of the volunteer’s testimony she provided to B’Tselem field researcher, Manal al-Ja’bri, and refrains from publishing the video since the language used in it is too despicable to quote.

The B’Tselem volunteer who filmed the incident from her window said the following:

“At 6 p.m. I went up to my apartment, which looks out over al-Hariqah neighborhood and the settlement of Kiryat Arba. At first I ignored the settlers’ party, but they turned the music up just when the muezzin called out for evening prayers from the mosque. They started mocking the prayer and insulting the Prophet Muhammad”.

“I saw a military jeep on the hilltop where the settlers were gathered. There were several other soldiers on the road below, which looks out over al-Hariqah Street that runs by the settlement. I began filming”.

“The settlers began to use foul language and call out obscenities concerning me, Islam, and especially the Prophet Muhammad. The Israeli soldiers and police did nothing to stop them. This was not the first time: about a year ago, I documented settlers swearing, using foul language and calling out obscenities against the Prophet Muhammad while soldiers and police allowed them to continue.”