REVIEW: The Hamas New Charter and the Western Response 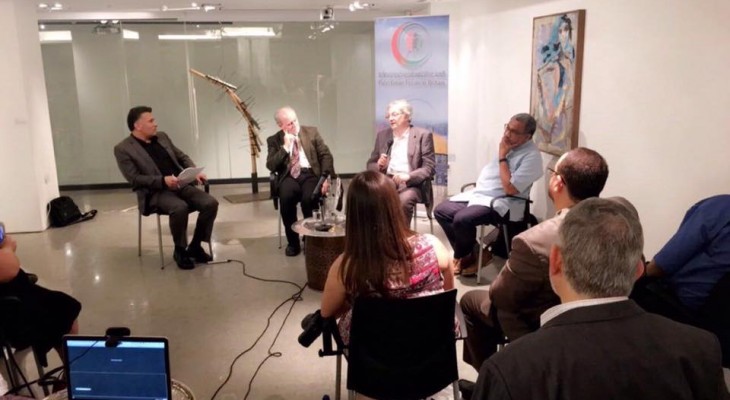 The event served as a review and assessment of the new charter released last month by the Palestinian Resistance Movement, Hamas, and explored the impact of the changes on the organisation and on the Palestinian-Israeli conflict.

The Chairman and moderator, Adeeb Ziadeh, author of a book on the origins of the Palestinian refugees living in the West Bank refugee camps, began by asking for a comparison between the old Hamas charter written 30-years ago and the new document described as a “Declaration of Principles”.

On the panel, Dr Azzam Tamimi, a British-Palestinian academic and political activist, responded by pointing to a number of errors contained in the original charter. Tamimi explained that Hamas had been under immense pressure from the Zionist lobby and other Palestinians to review the old charter which, in his opinion, was wrong. It talked about fighting Jews and not more especially those who have occupied Palestinian lands and forced its people out of their homes. Tamimi said that the old charter had also referred to a document, The Protocols of the Elders of Zion, now known to have been a fabricated manuscript. But the new document, in his view, was a vast improvement, but still came up short of expectations.

David Hearst, editor-in-chief of the Middle East Eye and the former chief foreign writer of the Guardian, said the document was a message to the international community to open the doors of dialogue, especially with countries that may not have been comfortable with speaking and liaising with Hamas in the past. However, he warned that the document was not an automatic entry of the group into the peace process. He said the quick-fire and volatile situation in the region militated against Hamas’ immediate and direct involvement in the peace process but the document would provide a way for the movement to have a voice.

Dr Daud Abdullah, director of the Middle East Monitor and author of numerous articles on the Palestine question, felt that the new document was published to accommodate the thinking of all Palestinians. He explained that the organisation had grown and evolved military and politically and therefore in the current political atmosphere Hamas has to engage in international relations and encourage genuine thought about the policy and principles that the movements now wants to reflect.

Later in the discussion, Abdullah clarified the point saying: “The old charter was written in 1988 at a time of the First Intifada and when the movement had no territory, no responsibility or international relations with anyone.”

He reflected on the new challenges ahead of the movement who he said needed funds and friends to help it stay afloat.

You cannot expect a liberation movement to stay stagnant; it has to grow and evolve. The new charter is a product of the growth since 1988.

The director of MEMO also explained that much of the old charter had been retained in the new document and he described the new charter as a “revival and reaffirmation of the original document.” However, Tamimi, who expressed reservations about the old charter, retorted that “Hamas had a ‘sentimentality’ problem”. “It doesn’t want to say the old document is nullified, just that it will disappear.”

As for the response of the Western media and their ignorance over Hamas, Abdullah, explained that the media had never been sympathetic towards Palestine, let alone Hamas. Those who supported the Palestinian cause, like UK Labour party Leader Jeremy Corbyn and the former NUS President Malia Boutaia, have been vilified by the media.

He explained that the balance of power has traditionally been against the Palestinians, but added:

The real issue was not with the charter but what Hamas does on the ground, the political positions it holds, the work that it does in providing services and whether it will be able to bargain from a position of strength.

Tamimi agreed that the new declaration left it open for Hamas to defend its right to remove occupiers either by force or through peaceful means but quoting the words of the outgoing leader Khaled Meshaal, he said:

There was nothing wrong with negotiating but when you are in the position of an underdog it means – they will stamp all over you!

“Israel must recognise that the occupation of Palestine was wrong in order to achieve peace – just as they acknowledged apartheid in South Africa,” Tamimi added.

On the question of the Hamas vision, Abdullah felt that the vision was now clear for all to see and although countries like the UK were still hostile and obstructive to Palestine, ten out of the 28 countries in Europe now recognised Palestine as a state and there has been a change in attitudes that have been brought about.

To conclude the session the panellists were asked to envision the future of Palestine: Tamimi was the first to respond: “Palestine is a region with history and culture. I would like to see people enjoying their culture their rights and dignity. Citizens should be able to live in harmony, exercise democracy and have actual human rights.”

Hearst was next to respond:

My vision for Palestine is where Jews and Arabs live together in harmony and justice… though I don’t think I will live long enough to see that!

Abdullah closed the session with the words: “There is to be no more racial discrimination amongst its citizens. Those who have been expelled should be given their right to return to their homes and or compensation should be given to them, it is their entitlement. Jerusalem should be the capital of Palestine and the Palestinian state should be a united historic Palestine for everyone.”

The event was held at P21 Gallery in central London and organised by the Palestinian Forum in London.