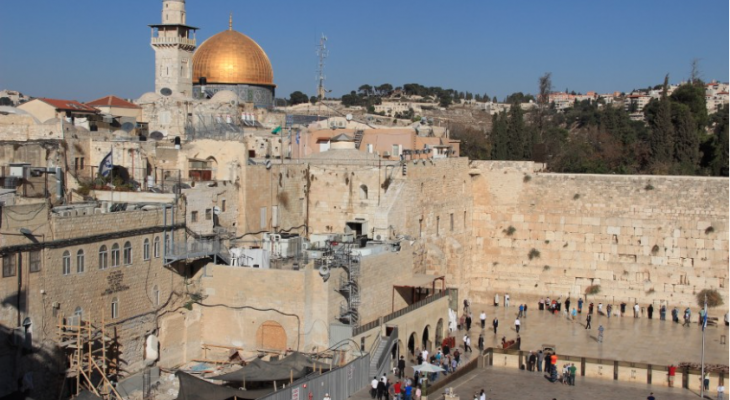 Under international law, East Jerusalem (including the Old City and its holy sites) are not legally part of Israel.

Since Israel's establishment in 1948, the US and international community have refused to recognize the sovereignty of any country to any part of Jerusalem in the absence of a permanent Arab-Israeli peace agreement.

No country in the world, including the US, has its embassy to Israel in Jerusalem.

During the June 1967 War, Israel militarily occupied the West Bank, including East Jerusalem, which had been under Jordanian control since 1948. Israel subsequently annexed East Jerusalem after massively expanding the city’s boundaries into the West Bank in a move that has been repeatedly condemned as illegal by the UN and international community.

There are approximately 330,000 Palestinians living in East Jerusalem. They can travel inside Israel and vote in municipal elections but endure systematic discrimination from Israeli authorities and face the constant threat of losing their right to live in the city if they travel abroad to study or work.

There are approximately 300,000 Jewish settlers living in the expanded boundaries of East Jerusalem in violation of international law and nearly 50 years of official US policy. While Palestinian residents of Jerusalem face discrimination from Israeli authorities in nearly every facet of life, including making it nearly impossible for them to build homes and other structures, Jewish settlers enjoy all the rights and privileges of Israeli citizenship and are encouraged by the government to steal Palestinian land and push Palestinians out of their homes.

In an attempt to separate and isolate East Jerusalem from the rest of the occupied West Bank, Israel has built a ring of settlements around its outskirts. This ring has been reinforced by the wall Israel is constructing, which has been ruled illegal by the International Court of Justice because most of it is built on occupied Palestinian land inside the West Bank and not along Israel’s internationally recognized pre-1967 borders.

Since 1993 and the signing of the Oslo Accords, Palestinians living in the West Bank and Gaza have been forbidden by Israel to enter East Jerusalem without a difficult to obtain permit. As a result, millions of

Palestinians living in the West Bank and Gaza are prevented from entering the city to worship at their holy sites, visit family, conduct business, study, or receive medical care.