Hamas' new political outlook: is it enough for engagement? 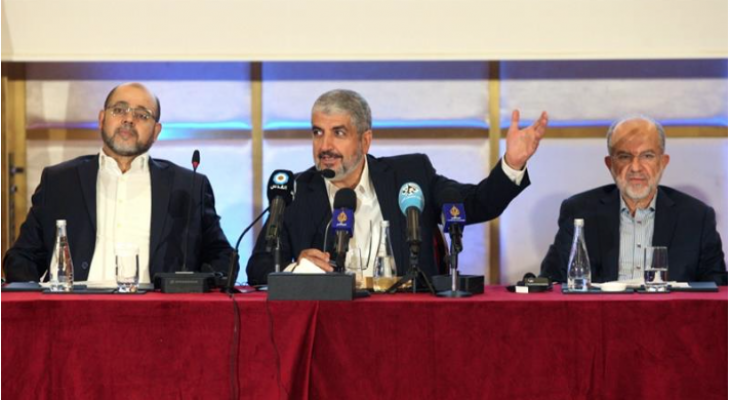 On Monday, Hamas political leader Khaled Meshaal revealed the Hamas' 'General Policies and Principles Document' after four years in the making at a press conference in Doha. The new political framework arrived days before Mahmoud Abbas will be due to visit Washington to discuss a new peace process with the U.S. administration.
The document is hailed by analysts to replace Hamas' founding charter, published on 18th August 1988 while Palestine was in the grip of the First Intifada, though the leadership has denied this.
Meshaal said in an interview with Al Jazeera that the document "is intended to function as a guiding principle for the Hamas organisation to deal with new emerging realities in our Palestinian society, our conflict with Israel and in the outside world."
No doubt, the publication is part of Hamas' objectives to portray to Palestinians, other political factions and the world an image that they are dynamic and adaptive and not a rigid ideological organisation.
Hamas critics have used the charter as proof that Hamas is antisemitic and violent due to its antisemitic references such as conspiracy theories and portraying the conflict between Palestinians and the State of Israel as a religious one.
"The old charter was a product of its era, 30 years ago. We live in a different world today." Meshaal added.
There are major differences between the new document and the founding charter, in addition to maintaining some of it's core values, resulting in a fine balancing act between hardline and moderate supporters.
Crucially, Hamas have accepted the formation of a Palestinian state along the 1967 borders with Jerusalem as it's capital and the return of Palestinian refugees to their homes, as a solution.
"Hamas considers the establishment of a Palestinian state, sovereign and complete, on the basis of the June 4, 1967, with Jerusalem as its capital and the provision for all the refugees to return to their homeland is an agreeable form that has won a consensus among all the movement members," Meshaal said.
The new document no longer contains antisemitic language or conspiracy theories. The organisation very clearly defines itself as a National Liberation Movement and to really drive this home, they have removed references to and thereby dropping the link to the Muslim Brotherhood of which it is an offshoot. Dropping this link is also said to aid Hamas to repair its relations with neighbouring Egypt.
"The Islamic Resistance Movement 'Hamas' is a Palestinian Islamic national liberation and resistance movement. Its goal is to liberate Palestine and confront the Zionist project. Its frame of reference is Islam, which determines its principles, objectives and means."
It has updated its analysis of the conflict, emphasising that it is political and not religious and that it is against the Zionist project and not Jewish people.
"Hamas affirms that its conflict is with the Zionist project not with the Jews because of their religion. Hamas does not wage a struggle against Jews because they are Jewish but wages a struggle against the Zionists who occupy Palestine. However, it is the Zionists who constantly refer to Judaism and the Jews in identifying their colonial project and illegal entity," the new document reads.
The new document also rejects the three demands by the Middle East Quartet that consist of the recognition of Israel, the renunciation of violence, and the adherence of previous diplomatic agreements.
"Hamas affirms that the Oslo Accords and their addenda contravene the governing rules of international law in that they generate commitments that violate the inalienable rights of the Palestinian people. Therefore, the [Hamas] movement rejects these agreements and all that flows from them such as the obligations that are detrimental to the interests of our people, especially security coordination (collaboration)," the document reads.
On the question of the use of violence, the document adds:
"Resisting the occupation with all means and methods is a legitimate right guaranteed by divine laws and by international norms and laws. At the heart of these lies armed resistance, which is regarded as the strategic choice for protecting the principles and the rights of the Palestinian people."
What has remained in the same is that Hamas does not recognise Israel, that its objective is to liberate all of Palestine including Mandate Palestine and that it will not negotiate with Israel until negotiations can be more meaningful.
"Hamas believes that no part of the land of Palestine shall be compromised or conceded, irrespective of the causes, the circumstances and the pressures and no matter how long the occupation lasts. Hamas rejects any alternative to the full and complete liberation of Palestine, from the river to the sea."
In an interview with Al Jazeera on the question of negotiations, Meshaal stated:
"For us, the principle of negotiations or not is not something set in stone. It is a matter of politics and it is dynamic. In our history, we have many examples where Muslim leaders have negotiated with their enemies, such as Prophet Muhammad and Salahuddin. The current circumstances have not matured enough for us to benefit from any negotiations with Israel."

"Currently, Israel is not interested in peace. Israel feels it is not obligated or forced to have peace with the Palestinians and give us our rights. When we are strong enough to create a reality that will force Israel to reconsider its positions against us, only then negotiations will have value and meaning for us. Look at, for example, the PLO's negotiations experience with Israel. It got them nowhere after decades of futile talks with Israel," Meshaal added.

The document that has been overdue can be seen as attempt by Hamas to take the moral high ground and to resonate with supporters of all religious and political persuasions, especially in light of resuming reconciliation talks with Fatah.
It wants to show itself to be democratic, principled and moving with the times. By correcting its failures in the founding chapter, it has been hailed to show a political maturity, displaying a level of pragmatism but also as a democratic entity.
It is an outcome of the international pressure from supporters to adapt the document so they can solidify their support in addition to the growing channels of communications Hamas is undertaking with other political factions and international community organisations.
Hamas wants to avoid international isolation with the contents of its founding charter that has put it in large disadvantage with the international community.
It is also a product of the failure of the Oslo Agreement to achieve peace in the region. With the Hamas elections two weeks away and Meshaal's retirement, it is also his last action to leave a legacy in regards to the growth and maturation of Hamas.
It is difficult to know whether this new framework will have Hamas' desired effect. It will be undoubtedly difficult to separate itself from its founding charter and reputation which for decades has tainted it as antisemitic, terrorist and violent. Particularly when it's denying that the new document is replacing the movement's founding charter.
Nonetheless, this is very clearly a step forward for Hamas for engagement and diplomacy with the Palestinian leadership in the West Bank and the international community.
It undoubtedly signifies a change in the tide and an olive branch to those who want to work with it for a just resolution. It was long over due and very important for Hamas to make explicit its position on and the analysis of the conflict today.
Their attempt to appear flexible, developing and ready to do business is no doubt a positive step forward towards a peaceful and just solution.
Topics : #Hamas Charter #Israel #Palestine #Hamas #Gaza #Politics
Tweets by @EuroPalForum