Despite pressure, the legitimacy of the state of Israel was questioned at a conference in Ireland By: Vyara Gylsen 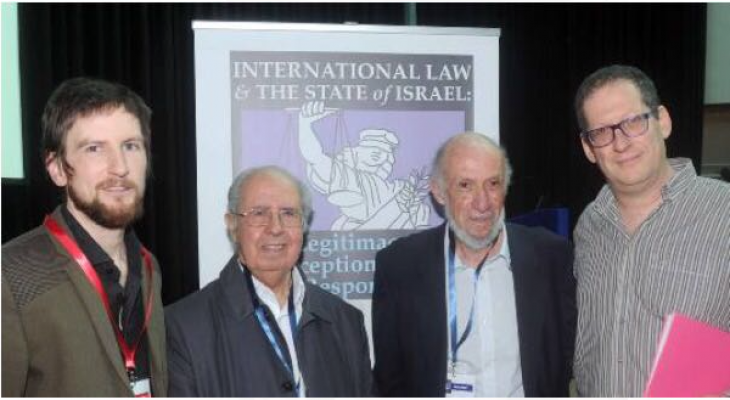 A ground breaking academic conference on the legitimacy of the state of Israel successfully took place in Cork, Ireland between 31st March- 2nd April 2017.  Over 180 speakers and participants attended, addressing the nature of the State of Israel  as opposed to the more frequently discussed situation in the Occupied Palestinian Territories (OPT). Hosted by Cork City Hall and University College Cork, the three day conference took place despite pressure from UK government ministers and Israel Lobby groups.

The conference entitled "International Law and the State of Israel: Legitimacy, Exceptionalism and Responsibility" was cancelled for two years in a row. The organisers stated that a central concern of the conference was the question of how international law might be used to achieve a just and lasting restoration of rights for Palestinians within the state of Israel and also considering Palestinians in the OPT and the wider Palestinian refugee and diaspora communities.

Initially due to take place at Southampton University in April 2015, the event was cancelled at a short notice after the university claimed that it was not banning but postponing the conference. In March 2016, the conference was cancelled by the university again, this time claiming that there is a risk to participants due to potential pro-Israel and other protests, despite that organisers were not due to hold a counter protest.

The organisers legally challenged both decisions by the university with no success before moving the conference to Cork, Ireland where it eventually took place.

Oren Ben-Dor, an academic at Southampton University and one of the conference organisers stated that administrators at the university of Southampton were standing "on the wrong side of history" by "suppressing freedom of speech on Israel".

Earlier this year, a letter signed by 243 academics was published in The Guardian, condemning “outrageous interferences with free expression” and “direct attacks on academic freedom” resulting from attempts “to silence campus discussion about Israel, including its violation of the rights of Palestinians for more than 50 years.”

In a statement, the Cork organisers said that much of the totally unjustified criticism and denigration directed at the conference was based on a simple premise: criticism of Israel is anti-Semitism.

"The inconvenient fact that a large number of speakers and some audience participants were themselves Jewish, from Israel and from the Diaspora, was dealt with by the frequent use of the old slur ‘self-hating Jew’. In fact, however, organisers had made it clear from the outset that anti-Semites, Holocaust deniers and the like were not welcome" the statement read.

"The conference took place against a backdrop of an organised and sustained campaign of denigration, smears and lies, designed to prevent it from proceeding," they added.

"An anonymous fake twitter account, designed to look like the real one, was established and used to propagate personal insults, some libellous, directed at the organisers and speakers. It was also used to disseminate a wide range of outrageously anti-Semitic and Islamophobic statements and claims, with the obvious intention of blackening the reputation of the organisers." the statement continued.

"Attacks of an entirely unjustified nature were also made on the university authorities, on Cork City Council and on the professional character, reputation and good character of organisers and speakers."

Richard Falk's keynote speech highlighted the meaning of apartheid, concluding that it is a justified term to describe the law and policies practiced by Israel. He drew on the recently published UN report he co-authored with Virginia Tilley, which was suppressed and eventually removed from the UN website.

The three day event also hosted nine panels featuring both pro-Palestine and pro-Israel speakers on topics including Zionist ethnic nationalism in domestic and international law; Israel's settler colonialism; tactical engagement and mobilisation of responsibility, including legal advocacy and the responsibility of Britain and the UN; responsibility for Palestinian refugees' Right of Return and Palestinians' belonging in the context of Zionism. Panels also addressed alternative futures for Palestinian rights and self determination.

"The conference has been central to the major current shift in terms of thinking about international law in relation to Israel - i.e. the shift from the limited focus on legal checks and balances on occupation, to the need to view (and respond to) the situation through the broader international legal prohibitions on settler colonialism and apartheid," the organisers said in a statement.

"This is a crucial shift after fifty years of what clearly can no longer be excused as a 'temporary' occupation, more than seventy years of partition and a century of colonisation sanctioned by imperial policy" they added.

The high-security conference concluded without major incidents, according to local Irish press.