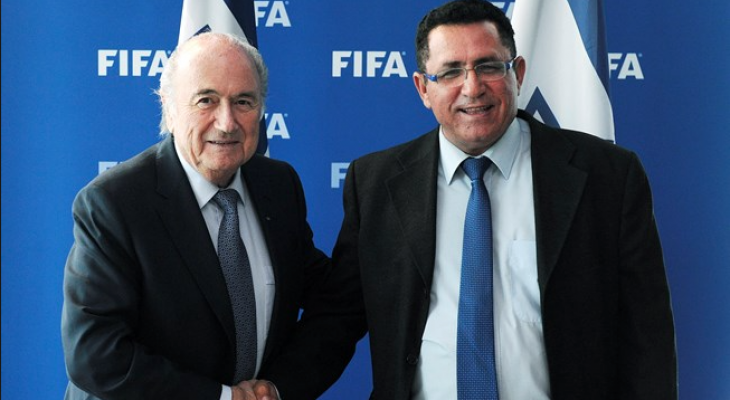 Israeli soccer head Ofer Eini was said to be furious after the chairman of a FIFA committee threatened to suspend Israel from all international competitions if it continues to allow teams from settlements in the West Bank to play in the national league.

Palestinians argue that the presence of six Israeli soccer clubs playing in West Bank settlements is in breach of FIFA statutes.

Eini reportedly exploded when Sexwale suggested that Israel would be suspended from all international competitions unless it disbarred the West Bank clubs. In their submission to FIFA, Palestinians had not mentioned suspension.

“The meeting was stormy, even virulent,” a source close to the talks told AFP.

After a stand-off reportedly lasting several hours Sexwale appeared to back down slightly, offering to delay any final decision until the FIFA Congress in May, and opening the door to continuing negotiations.

At the end of the meeting Sexwale presented a “draft final report containing specific recommendations,” FIFA said, adding that the parties will “come back” to him before he submits his final report to the FIFA Congress in Bahrain.

The source told AFP that Sexwale presented three possible options — to retain the status quo “with the legal risks arising therefrom”; to allow the Israeli federation six months “to rectify the situation of the six clubs in question”; or to request new negotiations between the two sides.

Rajoub insisted on Thursday the ball is now in Israel’s court.

“I don’t think that there will be any kind of agreement (in Bahrain),” he told AFP. “The question (is) whether the Israelis are going to abide and respect (international law and FIFA’s statutes) or they want to continue bullying like the bully of the neighborhood — it is up to them, the ball is in their court.”

“I think that now everybody is on the right track. There is a clear dimension of the violation — either of human rights or the UN resolution, or the FIFA statutes,” he said.

“I am looking forward and hope that the Israelis will understand it’s time for them to correct their violations and abide with international law,” said Rajoub.

David Alhaini, head of the Jordan Valley Regional Council, home to one of the six teams, responded to the FIFA ultimatum.

“The Jordan Valley is an inseparable part of Israel,” he said. “The attempt by Palestinians to drive a wedge between parts of the State of Israel and try to lead boycotts of Israeli football is unfounded and unjust. We remain strong and determined that our sports and national path is just, and we are confident that we will also win this battle successfully,” Israeli soccer news site One reported.