Theresa May wants British people to feel 'pride' in the Balfour Declaration. What exactly is there to be proud of? By: Robert Fisk 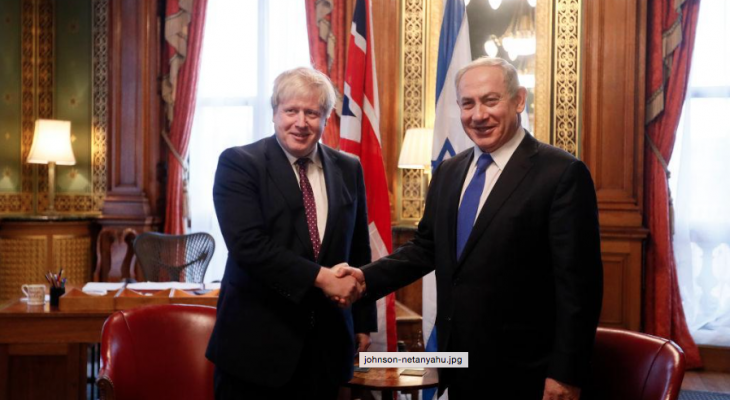 Theresa May told us that Britain will celebrate the centenary of the Balfour Declaration this summer with “pride”. This was predictable. A British prime minister who would fawn to the head-chopping Arab autocrats of the Gulf in the hope of selling them more missiles – and then hold the hand of the insane new anti-Muslim president of the United States – was bound, I suppose, to feel “pride” in the most mendacious, deceitful and hypocritical document in modern British history.

As a woman who has set her heart against immigrants, it was also inevitable that May would display her most venal characteristics to foreigners – to wealthy Arab potentates, and to an American president whose momentary love of Britain might produce a life-saving post-Brexit trade agreement. It was to an audience of British lobbyists for Israel a couple of months ago that she expressed her “pride” in a century-old declaration which created millions of refugees. But to burnish the 1917 document which promised Britain’s support for a Jewish homeland in Palestine but which would ultimately create that very refugee population – refugees being the target of her own anti-immigration policies – is little short of iniquitous.

The Balfour Declaration’s intrinsic lie – that while Britain supported a Jewish homeland, nothing would be done “which may prejudice the civil and religious rights of existing non-Jewish communities in Palestine” – is matched today by the equally dishonest response of Balfour’s lamentable successor at the Foreign Office. Boris Johnson wrote quite accurately two years ago that the Balfour Declaration was “bizarre”, a “tragicomically incoherent” document, “an exquisite piece of Foreign Office fudgerama”. But in a subsequent visit to Israel, the profit-hunting Mayor of London suddenly discovered that the Balfour Declaration was “a great thing” that “reflected a great tide of history”. No doubt we shall hear more of this same nonsense from Boris Johnson later this year.

Although the Declaration itself has been parsed, de-semanticised, romanticised, decrypted, decried, cursed and adored for 100 years, its fraud is easy to detect: it made two promises which were fundamentally opposed to each other – and thus one of them, to the Arabs (aka “the existing non-Jewish communities”), would be broken. The descendants of these victims, the Palestinian Arabs, are now threatening to sue the British government over this pernicious piece of paper, a hopeless and childish response to history. The Czechs might equally sue the British for Chamberlain’s Munich agreement, which allowed Hitler to destroy their country. The Palestinians would also like an apology – since the British have always found apologies cheaper than law courts. The British have grown used to apologising – for the British empire, for the slave trade, for the Irish famine. So why not for Balfour? Yes, but.... Theresa May needs the Israelis far more than she needs the Palestinians.

Balfour’s 1917 declaration, of course, was an attempt to avoid disaster in the First World War by encouraging the Jews of Russia and America to support the Allies against Germany. Balfour wanted to avoid defeat just as Chamberlain later wanted to avoid war. But – and this is the point – Munich was resolved by the destruction of Hitler. Balfour initiated a policy of British support for Israel which continues to this very day, to the detriment of the occupied Palestinians of the West Bank and the five million Palestinian refugees living largely in warrens of poverty around the Middle East, including Israeli-besieged Gaza.

This is the theme of perhaps the most dramatic centenary account of the Balfour Declaration, to be published this summer by David Cronin (in his book Balfour’s Shadow: A Century of British Support for Zionism and Israel), an Irish journalist and author living in Brussels whose previous investigation of the European Union’s craven support for Israel’s military distinguished him from the work of more emotional (and thus more inaccurate) writers. Cronin has no time for Holocaust deniers or anti-Semites. While rightly dismissing the silly idea that the Palestinian Grand Mufti, Haj Amin al Husseini, inspired the Holocaust of the Jews of Europe, he does not duck Haj Amin’s poisonous alliance with Hitler. Israel’s post-war creation as a nation state, as one Israeli historian observed, may not have been just – but it was legal. And Israel does legally exist within the borders acknowledged by the rest of the world.

There lies the present crisis for us all: for the outrageous right-wing government of Benjamin Netanyahu is speeding on with the mass colonisation of Arab land in territory which is not part of Israel, and on property which has been stolen from its Arab owners. These owners are the descendants of the “non-Jewish communities” whose rights, according to Balfour, should not be “prejudiced” by “the establishment of a national home for the Jewish people” in Palestine. But Balfour’s own prejudice was perfectly clear. The Jewish people would have a “national home” – ie, a nation – in Palestine, while the Arabs, according to his declaration, were mere “communities”. And as Balfour wrote to his successor Curzon two years later, “Zionism … is … of far profounder import than the desires and prejudices [sic] of 700,000 Arabs who now inhabit that ancient land”.

Cronin’s short book, however, shows just how we have connived in this racism ever since. He outlines the mass British repression of Arabs in the 1930s – including extrajudicial executions and torture by the British army – when the Arabs feared, with good reason, that they would ultimately be dispossessed of their lands by Jewish immigrants. As Arthur Wauchope, the Palestine High Commissioner, would write, “the subject that fills the minds of all Arabs today is … the dread that in time to come they will be a subject race living on sufferance in Palestine, with the Jews dominant in every sphere, land, trade and political life”. How right they were.

Even before Britain’s retreat from Palestine, Attlee and his Cabinet colleagues were discussing a plan which would mean the “ethnic cleansing” of tens of thousands of Palestinians from their land. In 1944, a Labour Party statement had talked thus of Jewish immigration: “Let the Arabs be encouraged to move out as the Jews move in.” By 1948, Labour, now in government, was announcing it had no power to prevent money being channelled from London to Jewish groups who would, within a year, accomplish their own “ethnic cleansing”, a phrase in common usage for this period since Israeli historian Illan Pappe (now, predictably, an exile from his own land) included it in the title of his best-known work.

The massacre of hundreds of Palestinian civilians at Deir Yassin was committed while thousands of British troops were still in the country. Cronin’s investigation of Colonial Office files show that the British military lied about the “cleansing” of Haifa, offering no protection to the Arabs, a policy largely followed across Palestine save for the courage of Major Derek Cooper and his soldiers, whose defence of Arab civilians in Jaffa won him the Military Cross (although David Cronin does not mention this). Cooper, whom I got to know when he was caring for wounded Palestinians in Beirut in 1982, never forgave his own government for its dishonesty at the end of the Palestine Mandate.

Cronin’s value, however, lies in his further research into British support for Israel, its constant arms re-supplies to Israel, its 1956 connivance with the Israelis over Suez – during which Israeli troops massacred in the Gaza camp of Khan Younis, according to a UN report, 275 Palestinian civilians, of whom 140 were refugees from the 1948 catastrophe. Many UN-employed Palestinians, an American military officer noted at the time, “are believed to have been executed by the Israelis”. Britain’s subsequent export of submarines and hundreds of Centurion tanks to Israel was shrugged off with the same weasel-like excuses that British governments have ever since used to sell trillions of dollars of weapons to Israelis and Arabs alike: that if Britain didn’t arm them, others would.

In opposition in 1972, Harold Wilson claimed it was “utterly unreal” to call for an Israeli withdrawal from land occupied in the 1967 war, adding that “Israel’s reaction is natural and proper in refusing to accept the Palestinians as a nation”. When the Palestinians first demanded a secular one-state solution to Palestine, they were denounced by a British diplomat (Anthony Parsons) who said that “a multinational, secular state” would be “wholly incompatible with our attitude toward Israel”. Indeed it would. When the PLO opposed Britain’s Falklands conflict, the Foreign Office haughtily admonished the Palestinians – it was “far removed” from their “legitimate concerns”, it noted – although it chose not to reveal that Argentine air force Skyhawk jets supplied by Israel were used to attack UK forces, and that Israel’s military supplies to Argentina continued during the war.

A year later, Margaret Thatcher, according to a note by Douglas Hurd, included “armed action against military targets of the occupying power” as a definition of “terrorism”. So the Palestinians could not even resist their direct occupiers without being criminals.

On an official visit to Israel in 1986, Thatcher said that she regarded discussion of Jerusalem as “internal politics”. In 2001, Tony Blair’s government granted 90 arms exports licences to Israel for “defensive” weapons – including torpedoes, armoured vehicles, bombs and missiles. There is much, much more of this in Cronin’s book, including Blair’s useless and disgraceful period as “peace” envoy to the Middle East and the growing business contracts between British companies and Israeli arms providers – to the extent that the British army ended up deploying Israeli-made drones in the skies of Afghanistan and Iraq.

Outside the EU, Theresa May’s Britain will maintain its close relations with Israel as a priority; hence May’s stated desire less than a month ago to sign a bilateral free trade agreement with Israel. This coincided with an Israeli attack on Gaza and a Knesset vote to confiscate – ie, steal – yet more lands from Palestinians in the West Bank.

From the day that Herbert Samuel, deputy leader of the Liberal Party and former (Jewish) High Commissioner for Palestine, said in the House of Commons in 1930 that Arabs “do migrate easily”, it seems that Britain has faithfully followed Balfour’s policies. More than 750,000 Palestinians were uprooted in their catastrophe, Cronin writes. Generations of dispossessed would grow up in the camps. Today, there are around five million registered Palestinian refugees. Britain was the midwife of that expulsion.

And this summer, we shall again be exhorted by Theresa May to remember the Balfour Declaration with “pride”.