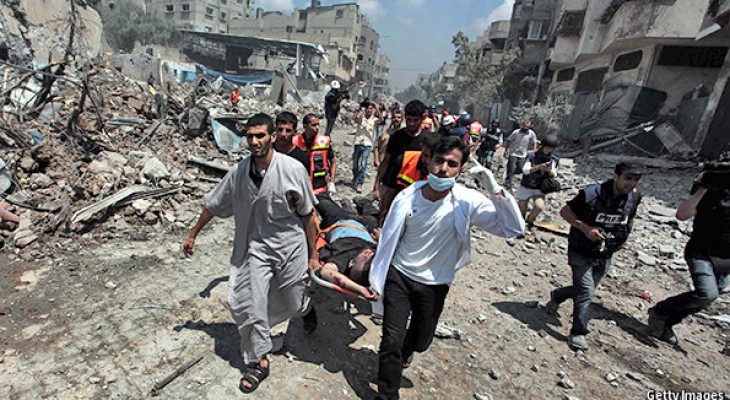 That's how long the 2014 war between Israel and Hamas lasted.

According to a recent report by the United Nations, more than 6,000 air strikes, 14,500 tanks shells and 45,000 artillery shells were unleashed on the Gaza Strip by the Israeli military.

Most of those munitions hit targets in Israel's sparsely populated south, or were deflected by the Iron Dome missile technology, but some rockets were able to land as far as the outskirts of Tel Aviv, at one point shutting the city's airport for a day.

In all, 2,251 Palestinians were killed in the fighting. Most were civilians, including 551 children

At least 73 Israelis were also killed out of which 67 were soldiers.

But behind the statistics are the stories of lives ruined or ended too soon.

He took me to see a pile of rubble that was once a large home he shared with his extended family.

The house was completely destroyed by Israeli tank shelling that killed his wife, three sons, daughter-in-law and one of his grandsons.

A year later, and al-Masri is now the sole caretaker of his surviving four grandsons who are all under the age of 10.

He says while he blames Israel for the deaths of his loved ones, he blames Hamas, which governs Gaza, and Fatah, the party of Palestinian President Mahmoud Abbas, for not doing more to improve things since the war ended in a ceasefire saying, "Hamas and Fatah are both too busy fighting each other than trying to help us. They only give money to their own supporters, but not the needy people. Only God can help me and my grandsons."

International donors including the United States and Gulf countries have pledged more than $5bn to help rebuild Gaza.

But Israel's economic siege, which has lasted for years, means badly needed construction materials like cement haven't been allowed in, despite offers by the United Nations to oversee the process.

The land blockade is so restrictive, that just one percent of the building material needed for reconstruction has been delivered; the influx of goods is so slow, the UN says it could take up to 30 years to rebuild.

And that, in part, is why around 20,000 Palestinians still live in temporary shelters ranging from cargo containers to makeshift tents in what's left of their bombed-out homes.

Ghazi Hammad, a senior Hamas spokesman, told Al Jazeera he understands the frustrations, saying "I feel people are suffering. We have to do everything we can to help people, for example, to open the crossings, to give a chance for reconstruction, and that is the mission of Hamas and Fatah; to work together and put their difference behind them." But that is little comfort to Ibrahim Abdeldaem.

He lost his legs in an Israeli strike while his family was sheltering at a UN school in Gaza City during the war.

His father and brother were killed in the attack. One year later and he says he's lost hope his life will get any better.

"I am completely destroyed. I've lost my legs. I've lost my job. I can't leave Gaza because we are under siege on all sides. All I want is at least one artificial limb to feel like a normal person again."

Aid agencies describe the continuing impact of last years war on Gaza's wounded as nothing short of "catastrophic".

Seventeen hospitals, 56 primary health facilities, and 45 ambulances were either damaged or completely destroyed during the conflict, costing Gaza's healthcare system an estimated $50m.

According to a report by the charity Save the Children, three-quarters of Palestinian children experience unusual bedwetting regularly, and around 90 percent of parents report that their children suffer from constant fear; with around two-thirds saying they are worried about another war with Israel.

At a drop-in centre in Gaza City, where children traumatised by the war can come and share what they feel, we met 12-year-old Salma al-Salwa.

She was drawing a picture of her family's home which was destroyed in an Israeli air strike.

They now live in a tent in the ruins of what was once their home.

Al-Salwa carefully drew the Israeli missiles that struck her house and etched tears on the faces of the stick figures that represented her, her parents and siblings, saying "I am sad because there is no safety here. We don't get to live like children in other countries. They feel safe, but we never feel safe in Gaza."

A sad truth about this tiny territory which has seen so much conflict, and is now barely able to cope one year after experiencing it's worst-ever war.