Haneen Zoabi: 'Israel is the only country not shocked by or afraid of Trump' By: Harriet Sherwood 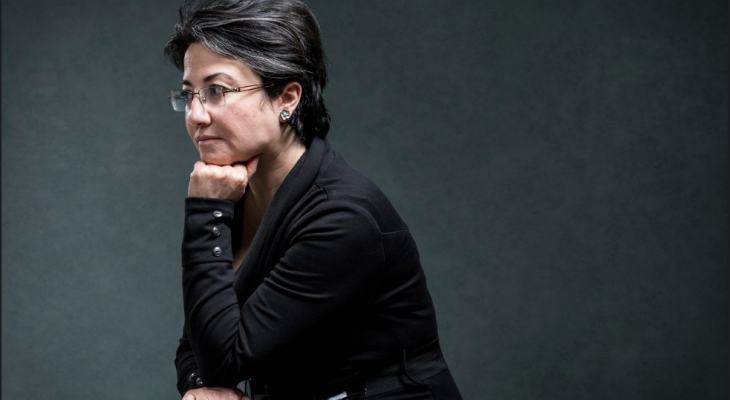 Haneen Zoabi, one of 14 Israeli-Palestinian members of the Knesset out of a total of 120, has been spat at, jostled and suspended from parliament. “I’ve got used to [abuse],” she says. “It’s partly because I am a woman, don’t forget that. [For some people] it’s normal to be angry towards a woman who doesn’t [meet] your expectations of how women should behave.”

Zoabi has long faced risk of expulsion. Under a law passed last summer, a member can be thrown out for “incitement to racism” or “supporting armed struggle” if 90 of the 120 legislators back such a move. Civil rights groups have said the law is directed at Palestinian members of parliament in an attempt to silence them. Isaac Herzog, the leader of Israel’s Labour party, described the legislation as a “dark mark on Israel’s face”. Zoabi has called it an attempt at “political assassination”.

“We are members of parliament. We don’t throw stones, we’re not in any armed resistance. We talk. And Israel has criminalised this,” she says. Zoabi, 47, was the first Israeli-Palestinian woman to be elected to parliament when she won a seat in 2009. About 20% of Israeli citizens are Palestinian, who have nominally equal rights but face institutionalised discrimination – for example, in funding for schools (which are segregated between Jews and Palestinians in Israel) and in public sector jobs. She grew up in Nazareth, where she still lives in an apartment in her parents’ house, and studied philosophy at the university of Haifa – one of the few mixed cities in Israel.

Her notoriety was triggered by her participation in a flotilla of ships attempting to break the blockade of Gaza in May 2010. It was intercepted by Israeli forces and nine pro-Palestinian activists were killed. Zoabi, who was aboard the lead ship, the Mavi Marmara, witnessed the violence.

The resulting furore has not diminished her commitment to activism. Earlier this month, she and other Israeli-Palestinian politicians protested at the Bedouin village of Umm al-Hiran in the Negev desert as Israeli forces took part in a demolition operation to make way for a new Jewish town. A Bedouin man was shot dead and a police officer died when he was hit by a car. Zoabi and her fellow lawmakers are now facing calls to be investigated for incitement. “What is happening at Umm al-Hiran is expulsion, it is apartheid, colonialism,” she says. “Palestinians are facing political expulsion from the Knesset, and physical expulsion from the Negev.”

Israel, she says, wants to “close the file” on the Palestinians’ demand for a state. Binyamin Netanyahu, the Israeli prime minister, “is shifting the paradigm from managing the crisis to solving the crisis – but [his is] a one-sided solution in the interests of Israel. Something has changed in the minds of Israelis: Palestinians have ceased to exist. The walls are not just physical, they are also psychological.”

This mindset is reinforced by the new US president, she says. “Donald Trump may seem bizarre and unique to most of the world, but not for Israel. His kind of populism [and] his way of violent speech are the dominant model in Israel. Israel is the only country not shocked and not afraid of Trump. On the contrary, Netanyahu and Trump represent the same model.”

If Trump follows through on his election pledge to move the US embassy to Jerusalem, signifying endorsement of Israel’s claim of the city as its “eternal and undivided capital”, there should be “strong reaction”, says Zoabi.

Zoabi said that Trump’s ban on people from some Muslim countries entering the US was a dangerous formalisation of Islamophobia. “This hatred is nothing new, it’s part of the culture, but now it’s being turned into policy. It’s becoming part of the norm that you can talk with hatred about Muslims without feeling any shame,” she said.

She would like to see a popular civil rights movement, with Palestinians taking to the streets, businesses closing in protest and the Palestinian Authority dissolving itself to force Israel to take responsibility “as an occupying force”. But the international community – Europe, and Britain in particular – must also act, she adds; Israel should not be able to expand settlements in east Jerusalem and the West Bank with impunity. “If you violate international law, you should pay the price.” Zoabi would like to see government sanctions and a boycott – “Can you imagine a more non-violent protest than a boycott?”

Within her own community, she says, it was no longer “against the norm [for women] to be active leading political struggles. This is not unusual. In Palestinian society, more women have academic qualifications than men. Women in the workplace are not unfamiliar. Independent women, choosing to continue a career, delaying marriage or not getting married, having fewer children – this is something you see more and more. It’s not a conservative society in a stereotyped way.” She has campaigned against issues such as polygamy, domestic violence and so-called “honour” killings. “We had four demonstrations last year, which were widely supported. I’m not in the margins on this issue – I’m in the consensus.”

Zoabi hopes she is a role model to younger Palestinian women: “You should stand for the things you believe in. If you don’t get direct results right now, it doesn’t mean to say there is no outcome. Maybe not for you, but for another generation.”

Last month, Zoabi took part in a protest by female parliamentarians and officials at the Knesset after two aides were barred for wearing insufficiently “modest” dresses. The dress code was eased as a result. “It was so silly – but sometimes you feel really powerful,” she says. “I just wish the Knesset cared as much about freedom as it does about looking at women’s dresses.”