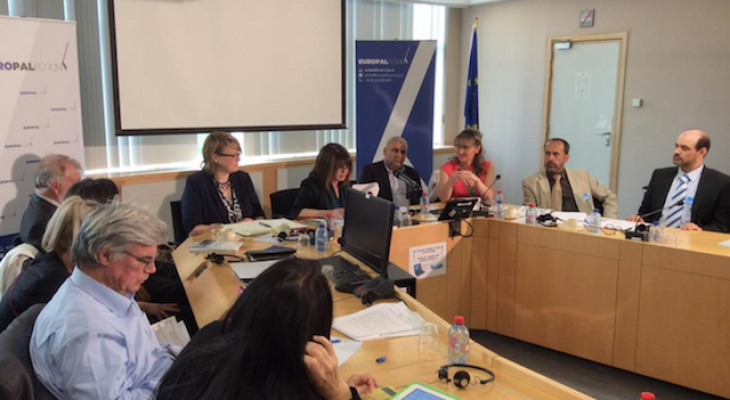 The European Parliament was the latest platform for discussion of the Palestinian issue in a political seminar organised by EuroPal Forum, hosted by Irish parliamentarian and MEP Martina Anderson on Tuesday 26th May 2015.
Zaher Birawi, EuroPal Chairman, welcomed attendees, including numerous parliamentarians, academics and prominent human rights activists from across Europe.
The seminar focused on The Politics of Reconstruction (Gaza, the EU, and Palestinian Governance), followed a seminar which took place in the UK House of Lords in March.
It brought together key speakers and participants and was divided into three topics: addressing the growing support in Europe for recognition of Palestine; the obstacles facing Gaza's reconstruction; and the EU's continuous opposition to the legitimation of Hamas despite the EU Court decision to remove Hamas from the terrorist blacklist.
Martina Anderson MEP opened the discussions with a reminder of the strong Israeli lobby within the EU, and how this has detracted from the issue of Palestinian recognition. She also emphasised the weak wording of the resolution passed in November 2014 which only expressed support "in principle" of the recognition of a Palestinian state, along with furthering negotiations between Israel and the Palestinians.
Pierre Galand (former senator in the Belgian parliament) spoke about the tragic situation in the Gaza Strip and the need to fight not just for reconstruction of Gaza, but more importantly for an end to the illegal blockade which is suffocating the Strip. Mr Galand who is founder of the Belgian Palestinian Solidarity Association and general coordinator of the Russell Tribunal on Palestine, stressed the importance of the Boycott Divestment Sanctions (BDS) movement and that it was these three steps which helped isolate and ultimately end the South African Apartheid regime.
The final speaker was Liliane Glock (prominent French lawyer who represented Hamas in the EU Court) who said that the Palestinian movement (Hamas) should be removed from the EU terrorism blacklist. She reflected favourably on the Court’s decision, which suggested that retaining Hamas on the terrorist list could be counter-productive to the Middle East peace process, especially given its significant level of popular support.
The meeting agreed to circulate a letter regarding the issue of the ongoing imprisonment of 14 members of the Palestinian Legislative Council including its Speaker Dr Aziz Duwaik who is currently serving a 12 months jail sentence issued by the Israeli Military Court on Monday 25th May. The letter urges MEPs to consider the suspension of future collaboration with their Israeli counterparts until this matter of the Palestinian parliamentarians is resolved in a just and fair manner.
Topics : #Gaza Strip #Hamas #AskHamas #Martina Anderson #European Parliament #MEPs #EuroPal Forum seminar #Brussels #Palestinian issue
Tweets by @EuroPalForum