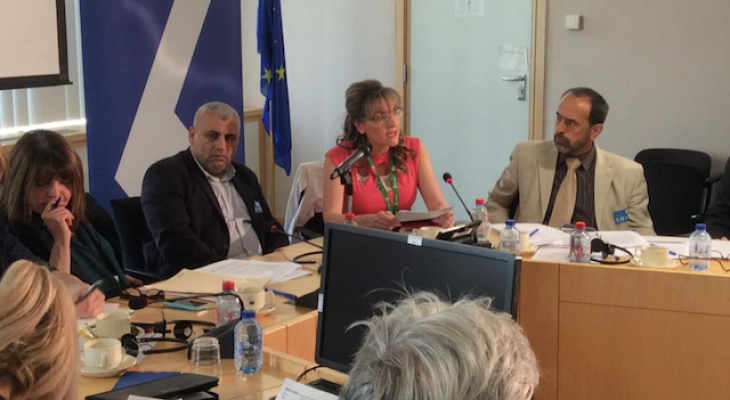 Speaking at the EuroPal Forum seminar on The Politics of Reconstruction: Gaza, the EU, and Palestinian Governance, which took place at the European parliament this Tuesday 26th May, along with the chairman of ECCP Mr Pierre Galand and Hamas lawyer in the European court Ms Liliane Glock.

Ms Anderson said; “In November 2014 the European Parliament debated the recognition of Palestine and then passed a joint motion the following month.

“That was part of a broader worldwide trend towards the recognition of Palestine which saw similar motions in Ireland, Britain, Sweden, Spain, France, Portugal and elsewhere.

“These motions are hugely important as the EU itself cannot recognise Palestine, it can only express support.

“The European Parliament motion was, however, a disappointment in our view, as it made recognition of Palestine conditional on a successful agreement with Israel.

“Recognition should not be conditional on anything. In fact, recognition would give Palestine additional leverage in any negotiations with the Israelis.

“We will continue to call on all member states to recognise Palestinian statehood to give further support to the Palestinian people and assist the peace process in the region.”