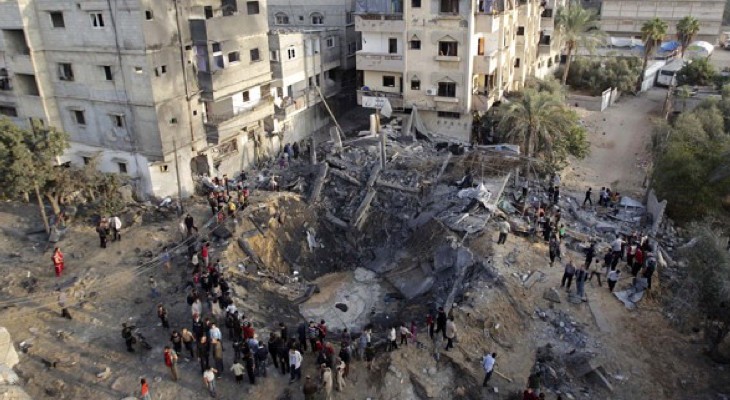 A high-profile group of former European political leaders, dubbed "the European Eminent Persons Group," called on the EU's foreign policy chief, Federica Mogherini, to renew EU efforts for a "substantive negotiations between Israelis and Palestinians" on its own, not under the flagship of the United States in a letter reported by the British newspaper, Guardian. Earlier this year, some 63 members of the European Parliament urged E.U. foreign policy chief, Federica Mogherini, to suspend the main treaty between the EU and Israel, the EU-Israel Association Agreement.

The European Union also proposed sanctions over Israel's aggressive attitude toward the occupied Palestinian territory. The sanctions include European companies that work with Israeli businesses being prohibited from establishing buildings in Jewish settlement projects in the West Bank and in East Jerusalem.

The gap between Israel and the European Union has further widened, regarding Palestine's drive for statehood and the International Criminal Court (ICC) bid. By joining the ICC, Palestine aims to bring human rights violations and war crimes committed by Israeli troops to the court, since Israeli actions remain unpunished, despite reports by the U.N. and independent non-governmental organisations that have shown that Israel has committed war crimes on several occasions.

The Palestinians accepted the court's jurisdiction in mid-January and officially joined the ICC on April 1 in hopes of prosecuting Israel for alleged war crimes and crimes against humanity during the Gaza conflict.

The prosecutor of the International Criminal Court warned Israel on Tuesday that if it doesn't provide reliable information for her preliminary probe into possible war crimes in Palestinian territories she may be forced to decide whether to launch a full-scale investigation based on Palestinian allegations.

Regarding international support for Palestinian statehood in the international arena, the Vatican said Wednesday it had completed negotiations with Palestinian officials on a treaty effectively recognising Palestine as a state, a diplomatic move that attracted immediate criticism from Israel.

The new treaty will be the first signed not between the Vatican and the PLO, but between the Vatican and the State of Palestine, amounting to formal recognition. A bilateral commission of the Holy See and the State of Palestine, working on the follow-up agreement to the 2000 agreement, has concluded its task, a joint Vatican-Palestinian statement said. The Holy See's relations with Palestinians are currently governed by a 2000 agreement signed by the Palestinian Liberation Organisation (PLO).

Before the Israeli election took place, Netanyahu accused Scandinavian countries of meddling in the election through funding a campaign against him, spending millions of dollars. European countries also urged Netanyahu to stick to the two-state solution. France, Ireland, Britain, Spain and Belgium have all called for the recognition of Palestine as a state. However, all European moves so far have been symbolic