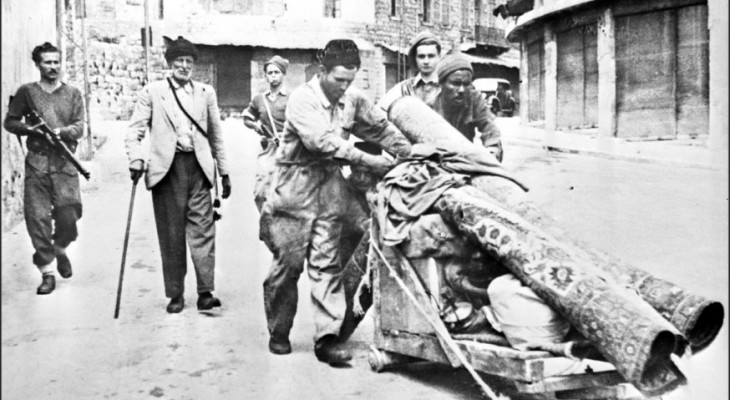 •The Palestinian “Nakba” (“catastrophe” in Arabic) refers to the mass expulsion of Palestinian Arabs from British Mandate Palestine during Israel’s creation (1947-49).

•The Nakba was not an unintended result of war. It was a deliberate and systematic act necessary for the creation of a Jewish majority state in historic Palestine, which was overwhelmingly Arab prior to 1948. Internally, Zionist Jewish leaders used the euphemism “ transfer” when discussing plans for what today would be called ethnic cleansing.

•The Nakba’s roots lay in the emergence of political Zionism in 19th century Europe, when some Jews, influenced by the nationalism then sweeping the continent, concluded that the remedy to centuries of anti-Semitic persecution in Europe and Russia was the creation of a nation state for Jews in Palestine and began emigrating as colonists to the Holy Land, displacing indigenous Palestinians in the process.

•In November 1947, following the horrors of World War II and the Nazi genocide of European Jewry, the newly-created United Nations approved a plan to partition Mandate Palestine into Jewish and Arab states. It allocated approximately 55% of the land to the proposed Jewish state, although Zionist Jews owned only about 7% of the private land in Palestine and made up only about 33% of the population, a large percentage of whom were recent immigrants from Europe. The Palestinian Arab state was to be created on 42% of Mandate Palestine, with Jerusalem becoming an international city. (See here for map of the partition plan and subsequent 1949 armistice lines.)

•Almost immediately after the partition plan was passed, violence broke out and large-scale expulsions of Palestinians began, long before the armies of neighboring Arab states became involved. When Zionist forces finished expanding, the new state of Israel comprised 78% of historic Palestine, with the remainder, the West Bank, including East Jerusalem, and Gaza, falling under the control of Jordan and Egypt, respectively. In the 1967 War, Israel occupied the remaining 22% and began colonizing them shortly thereafter.

•The Nakba did not end in 1948 and continues until today, in the form of Israel’s ongoing theft of Palestinian land for settlements and for Jewish communities inside Israel, its destruction of Palestinian homes and agricultural land, revocation of residency rights , deportations, periodic brutal military assaults that result in mass civilian casualties such as the one that took place in Gaza in the summer of 2014, and the denial of the internationally-recognized legal right of return of millions of stateless Palestinian refugees.

The Nakba by the Numbers:

•Between 750,000 and one million : The number of Palestinians expelled and made refugees by Zionist paramilitaries, and subsequently Israeli forces, during Israel’s creation in 1947-49.

•Between 250,000 and 350,000 : The number of Palestinians expelled from their homes by Zionist paramilitaries between the passage of the UN partition plan in November 1947 and Israel’s declaration of independence on May15, 1948 - prior to the start of the war with neighboring Arab states.

•Approximately 7.1 million : The number of Palestinian refugees and displaced persons as of 2009, including Nakba survivors and their descendants. They are located mostly in the occupied West Bank and neighboring Arab countries such as Lebanon, Jordan, and Syria, denied their internationally-recognized legal right to return to their homeland by Israel, simply because they are not Jewish.

•Approximately 150,000 : The number of Palestinians who remained inside what became Israel's borders in 1948, many of them internally displaced. These Palestinians (sometimes called “Israeli Arabs”) were granted Israeli citizenship but stripped of most of their land and placed under martial law until 1966. Today, there are approximately 1.6 million Palestinian citizens of Israel, who live as second-class citizens in their own homeland, subject to more than 50 laws that discriminate against them because they are not Jewish.

•At least two dozen : The number of massacres of Palestinian civilians by Zionist and Israeli forces, which played a crucial role in spurring the mass flight of Palestinians from their homes.

•Approximately 100 : The number of Palestinian civilians, including women and children, massacred in the town of Deir Yassin on April 9, 1948, by members of the Irgun and Stern Gang, pre-state Zionist terrorist organizations led by future Israeli prime ministers Menachem Begin and Yitzhak Shamir, respectively.

•More than 400 : The number of Palestinian cities and towns systematically destroyed by Israeli forces or repopulated with Jews between 1948 and 1950. Most Palestinian population centers, including homes, businesses, houses of worship, and vibrant urban centers, were demolished to prevent the return of their Palestinian owners, now refugees outside of Israel's pre-1967 borders, or internally displaced inside of them. (See here for interactive map of Palestinian population centers destroyed during Israel's creation.)

•Approximately 4,244,776 : The number of acres of Palestinian land expropriated by Israel during and immediately following its creation in 1948.

•Between 100 and 200 billion : The total estimated monetary loss of Palestinians dispossessed during Israel's creation, in current US dollars.