The divisive Balfour Declaration is a hot potato in Westminster By: Alastair Sloane 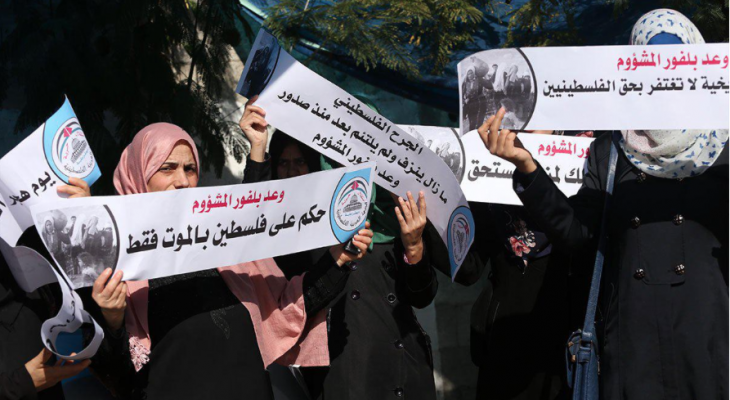 The question of whether the centenary of the Balfour Declaration should be celebrated or politely ignored is a bit of a hot potato in Westminster these days. This may well be a sign that the government is finally understanding how sensitive the current crisis in Palestine really is.

Palestine faces an existential threat. Waves of expansionist Zionism have replaced what we might call the quietest Zionism that could have kept Israel within its problematic but manageable 1948 borders. As a result, Israel is spreading ever further and ever faster towards Jordan to the east, and Syria and Lebanon to the north.

This more aggressive Zionism threatens to subsume fully what remains of the occupied West Bank, which should have long ago become part of the independent State of Palestine; today it is within the dominion of the Israel Defence Forces, Israel’s Shin Bet internal security agency and Palestinian Authority collaborators. The Palestinians living there are under martial law and illegal Israeli settlers are under Israeli law. The two classes of citizens travel on separate roads, with the Israelis having the luxury of direct routes while the Palestinians are confined to looping diversions which turn their journeys into lengthy ordeals; fixed and mobile military checkpoints compound their difficulties. The West Bank economy, meanwhile, remains sluggish, on top of which high levels of Palestinian Authority incompetence and corruption make for a truly miserable existence.

Hebron, the epicentre of what is to all intents and purposes a territory governed by apartheid, was the subject of robust scrutiny in the House of Commons last week. Conservative MP Sir Desmond Swayne posed a question to the relevant government relevant minister. “Has he walked the streets of Hebron, which Palestinians may not use?” he asked. “We used to call that apartheid.”

Apologists for Israel, such as Caroline Ansell MP, claim that Israel is no apartheid state. It is, as Ansell put it on the floor of the House during a recent debate on the Balfour Declaration, “a multiracial, multi-ethnic democracy where Arabs, Druze and other minorities are guaranteed equal rights under law.” That doesn’t sound very much like an “apartheid” state to anyone.

The Tory MP for Eastbourne made this point, though, having recently returned from an all-expenses paid trip to Israel funded by the Conservative Friends of Israel advocacy group. On her return, she called for a debate to celebrate the hugely controversial 1917 declaration.

Theresa Villiers MP is also a member of Conservative Friends of Israel. She rocked up to the Balfour debate a little later in the afternoon and made the exact same point that Ansell had earlier, using suspiciously similar wording.

“It is also important to recognise,” intoned Villiers, “that Israel is a multi-ethnic, multi-faith democracy in which Arabs, Druze and other non-Jewish minorities are guaranteed equal rights under the law.” Ansell nodded along in agreement. It was an incredible coincidence; so incredible that one wonders if certain lobbying organisations may be providing scripted comments to sympathetic MPs on how to beef up Israel’s international reputation in a synchronised fashion. Nevertheless, both Ansell and Villiers were no doubt disappointed to hear the response from the minister.

“The Balfour Declaration is part of our history that some celebrate and some condemn,” Tobias Ellwood pointed out rather lukewarmly. It “had its flaws”; was only “a product of its age”; and “we cannot change the past, but we can strive to influence the future.” In particular, the former army captain noted, the declaration “should have protected [Palestinians’] political rights.” The reality is that the Balfour Declaration did indeed insist that moves towards the “establishment in Palestine of a national home for the Jewish people” should ensure that “nothing shall be done which may prejudice the civil and religious rights of existing non-Jewish communities in Palestine.”

The Conservative Friends of Israel, which had just treated Ansell to a trip to Israel at great expense, ignored all of this (as do all apologists for the Zionist state), and instead helpfully repeated on its website the claim made by the two Tory MPs during the debate. In case anyone was still not sure about it, CFI pointed out that Israel “is a multiracial, multi-ethnic democracy where Arabs, Druze and other minorities are guaranteed equal rights under law.”

Villiers made the closing speech at a fringe meeting hosted by Conservative Friends of Israel at this year’s Conservative Party conference in Birmingham. Attended by “several hundred people”, according to her website, the North London MP made an interesting admission about her own contribution to the propaganda of the pro-Israel Lobby: “I admit to being a serial complainer about media bias [sic] towards Israel and I will continue to complain about unfair or one-sided coverage whenever I see it on our TV screens.”

The ladies doth protest too much, perhaps. Why were Ansell, groomed more recently by CFI, and Villiers, a serial harasser of the British media and a member of CFI since 1999, so keen to emphasise the point about Israel being multi-this and multi-that? It’s simple: the Ministry of Foreign Affairs in Israel is starting to feel the heat from the Boycott, Divestment and Sanctions (BDS) campaign; the legitimacy of that movement’s success rests entirely on the claim that Israel is not, in fact, “pluralist” or “multi-ethnic” or, indeed, “multi-religious”, but is most definitely engaged in “apartheid”.

The lobbyists’ insistence that Israel is especially democratic is troubling; it is a claim that is made repeatedly, is often left unchallenged and is rarely substantiated in any demonstrably serious way. It is a propaganda point that is now being made to undermine the BDS movement in Britain.

Israel’s consternation about BDS was made additionally clear this month by another pro-Israel pressure group, BICOM, which is staffed by former embassy and military officials, as well as ex-Whitehall spin-doctors, and is London-based. Capitalising on social media, its current “most liked” article is a press release entitled “New BICOM poll finds even stronger opposition to boycotts of Israel” which was timed to coincide with the year-long countdown to the centenary of the Balfour Declaration. The press release focused on the fact that opposition to such boycotts is — allegedly — on the rise. The question used in the BICOM poll couldn’t have been more leading: “I don’t boycott goods or produce from Israel and find it difficult to understand why others would single out Israel to boycott given everything else that’s going on in the world.”

Even allowing for some of those polled having their minds changed at the last minute by this preposterously unscientific wording, the results are on some level troubling. Anti-BDS propaganda is clearly working; eight per cent more people agreed with the statement than last year. However, even the infographic that accompanied this headline claim was misleading; it failed to label properly that “thirty-seven per cent neither agreed nor disagreed” with BDS, placing this astonishing detail only in small-print at the bottom.

A closer look at the poll also suggests why the government is less keen to celebrate the Balfour Declaration overtly. Again; it was what remained unsaid by BICOM that was critical; information that was only visible in the original polling data, tucked away on a different website. The key omitted statistic was that, when asked to rate Israelis or Palestinians from “very warm and favourable” to “very cold and unfavourable” nearly half of the two thousand Britons polled had unfavourable views of both sides in the conflict.

Placing any political capital on celebrating the Balfour Declaration is a fools’ game. Firstly, it has never actually been enacted in full, precisely because the insistence that “nothing shall be done which may prejudice the civil and religious rights of existing non-Jewish communities in Palestine” has been ignored and the resulting apartheid is instead being covered-up — disgracefully so — with desperate claims that Israel is a democracy which supports Druze and Arabs and so on. These claims, epitomised by Villiers and Ansell but common across all of the pro-Israel Lobby groups, serve only to deflect attention from the abominable human rights violations taking place in the Israel-controlled West Bank and Gaza Strip, as well as inside Israel itself. The MPs’ claims are certainly not grounded in fact.

Furthermore, it is also an issue about which most Britons won’t take sides. This could be because the British are squeamish about both politics and religion at any time, let alone when they overlap in controversial circumstances, as they do in Palestine-Israel. Perhaps it is also because they are fed up with the high-pitched rhetoric of pro-Palestinian and pro-Israel advocates, and have switched-off altogether.

The story doesn’t end there though. Tobias Ellwood spoke at a Conservative Friends of Israel event in parliament soon after the Balfour debate, with Theresa Villiers in the chair. The press release issued the following morning trumpeted that “Britain is very proud of our role” in the establishment of a “Jewish homeland” and attributed the words to Ellwood, who had poured cold water on the idea that the Balfour Declaration was a thing of great beauty in his role as a Minister of the Crown on the floor of the House of Commons only a week or so before.

Had the pro-Israel Lobby reprimanded him for not sticking to the script in the Commons debate? He was keen to assure those attending that the celebrations were certainly going ahead: “No 10 is currently making those arrangements and I think that’s very, very important.”

We will probably never know from where this remarkable turnaround in opinion came from, but it should be a matter of great concern for anyone concerned about British democracy that lobbyists appear to be capable of incredible influence at the very heart of our government on such crucial and emotive issues.