Muslims, Christians, Jews raise call to prayer together in Nablus 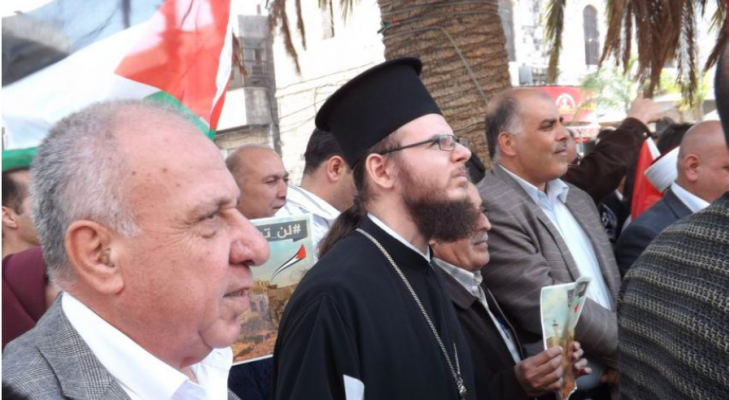 Residents, representatives of Palestinian factions and followers and representatives of all three monotheistic religions attended the protest, under the slogan “minarets will never be silenced”. All of the participants raised the athan (call to prayer) together.

Activist Mazen Al-Danbak, who called for organising the protest a week ago, said: “This protest sends a message to the Israeli occupation telling it to stop playing with our holy sites, as well as sending a message to the world asking it where it is regarding these flagrant violations against holy sites.”

“We tell the occupation to leave our land and we insist that it will not be able to silence the minarets and will not stop them calling Allahu Akbar.”

Nablus Governor Akram Al-Rajoub said that the protest sent a message to the Israeli occupation that it “will not be able to dominate mosques and churches”.

Mufti of the Palestinian city Sheikh Ahmed Shobas said: “Raising the athan is religious rite guaranteed for followers of all different religions.”

Bishop of the Catholic Church in Nablus Yousef Sa’ada condemned the Israeli attempt to silence the athan, noting this is a “sign of the [Israeli] occupation’s ethical, moral and political bankruptcy.”

“The Palestinian followers of all religions are united against this [Israeli] bill. This is a proof that Israel has started the stage of collapse and it is fading.”

Secretary of the Sumerians, a Jewish sect in Nablus, condemned the Israeli measure. “There will not be safety or security until followers of all religions are able to practice their religious rituals freely.”

“As long as Allahu akbar is calling five times a day and bells of churches are ringing every Sunday, we, the Sumerians, feel safe and secure.”