UK elections: the question of Palestine By: Tom Charles 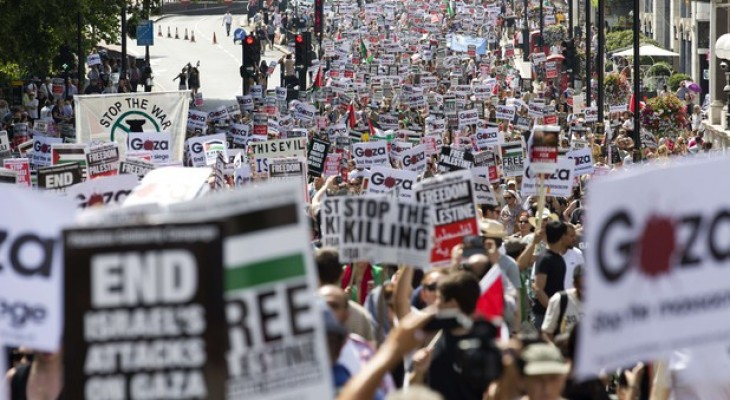 Foreign policy has been low on the agenda in the run-up to UK parliamentary elections set for 7 May. All the main parties have focused on economic growth, housing and jobs rather than the UK's role in distant conflicts. Palestine and Israel have barely hit the radar.

So what can the Palestinians expect from the next UK government?

The answer could depend on some of the small, left-leaning parties that have made offers to join a coalition with Labour. The SNP, Plaid Cymru and Greens have made direct, televised offers to work with the party, currently in opposition, which is unlikely to win a parliamentary majority in May.

Labour leader Ed Miliband may well take advantage of these to keep the Conservatives out of power. Miliband was wise not to accept any of their offers immediately, but it is almost certain that to become prime minister he would need their help.

The Liberal Democrats, whose leader Nick Clegg was absent from a recent televised debate (as was Prime Minister David Cameron), are probably not adverse to a deal with Labour either. They will be looking for a way to maintain a role in government despite having lost credibility on the left for having gone into coalition with the Conservatives.

It may be that Labour and the Lib Dems can scrape together enough seats together to form a coalition. This would save Miliband from having to deal with the SNP, a party committed to Scottish independence and the breakup of the UK.

On the face of it, a Labour-Liberal pact might seem like good news for the Palestinians. Last year, as Israel pounded Gaza, Clegg called for direct talks with Hamas and the suspension of UK arms sales to Israel. And back in 2009 Clegg was scathing in his criticism of the Labour government over Gaza.

But unlike the other smaller parties, the Liberal Democrats have had the chance to live up to their rhetoric on Palestine: they have been in government for the past five years. But as Israel pounded Gaza again in 2012, Clegg remained silent on the issue. In 2013 he suspended an MP who described Israel as an "apartheid state".

Much of Clegg's popularity in 2010 came from his party's flagship pledge to scrap tuition fees for university students. Students now paying £9,000 a year for their education are well-placed to warn Palestinians of the Lib Dems' flaky commitment to their values.

So what about the other parties vying for Labour's affections? Plaid Cymru (the party of Wales) leader Leanne Wood has also reminded viewers of her party's opposition to the wars in Iraq and Afghanistan.

Wood is affiliated to the Palestine Solidarity Campaign. Last year Plaid Cymru demanded a recall of parliament over the Gaza assault, calling the "collective punishment" of Gaza a "war crime".

The Greens have been equally outspoken. In 2014, party leader Natalie Bennett described the "atmosphere of terror" that Israel was creating in Gaza. In the recent televised debate, Bennett criticised the UK government policy of joining American wars in the Middle East, and criticised arms sales to Saudi Arabia.

Although she did not condemn arms sales to Israel, her party's manifesto calls for a solution to the Middle East conflict based on either "one state or two" in former mandate Palestine. In the first paragraph of the section on Palestine / Israel the issue of the Palestinian refugees is named as a primary cause of the decades-old conflict.

It seems that the SNP, Plaid Cymru and the Greens take a balanced approach to the problems of the Middle East. Unencumbered by the potent influence of Zionist money and lobbying, these parties support policies that could make a serious contribution to peace in the Middle East.

But the growing clout of small parties could swing the next UK government in the opposite direction.

The far-right UKIP, which failed to win a single seat in 2010, commands enormous media coverage, and is likely to win at least a handful of seats. Its leader, Nigel Farage, also took part in the televised debate.

UKIP's predatory approach to politics has seen them play on people's fears about immigration while avoiding addressing the real causes of the country's economic problems. The UK's minorities have reason to be concerned should UKIP enter an alliance with the Conservatives.

The polls suggest another hung parliament in the UK. The outgoing Conservative-Lib Dem coalition supported Israel to the hilt - tacitly at times, but that makes little difference to the Palestinians.

A more progressive alliance is possible in 2015. Whether that will lead to a more serious push for peace and justice in Palestine is unclear.

Without a more effective popular campaign for Palestinian rights combined with more professional lobbying on the issue, it is likely that the UK's policy on Palestine will continue to be shaped by Zionist interests and biases.