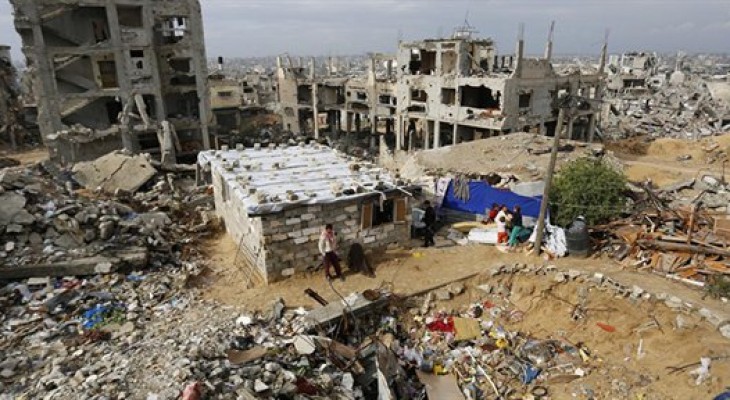 Dozens of aid agencies have called for international sanctions on Israel over its continued illegal blockade of the occupied Gaza Strip and the fact that six months after its deadly and devastating assault, there has been virtually no reconstruction in the territory.

The report, “Charting a New Course: Overcoming the stalemate in Gaza,” signed by 46 international nongovernmental organisations working in Palestine, says that Israel must lift the blockade and allow free movement between the occupied West Bank and Gaza Strip or face punitive consequences.

“The blockade constitutes collective punishment; it is imposed in violation of [international humanitarian law] and, according to the UN, may entail the commission of war crimes,” the report says. “The international community should promptly develop a common response to the government of Israel if immediate progress is not made to lift the blockade.”

It also names the deadbeat states – including Turkey, Kuwait, the United Arab Emirates and Saudi Arabia – that have failed to deliver on the reconstruction aid they promised for Gaza.

The report’s signatories, including Oxfam, Save the Children, KinderUSA, Medical Aid for Palestinians, The Carter Centre, Norwegian People’s Aid and Médecins du Monde Switzerland, also call for a suspension of arms transfers to Israel and revocation of arms export licenses.

“Operation Protective Edge – the codename used by Israel for the 51-day military operation and the associated conflict between Israel, Hamas and other Palestinian armed groups – has inflicted unprecedented destruction and human suffering in Gaza,” the report states.

“Yet today, six months after the donor conference, little tangible change has taken place on the ground in Gaza and living conditions for women, girls, men and boys continues to worsen,” it adds.

Despite the fact that more than 100,000 people whose homes Israel destroyed remain without permanent shelter, “no permanent housing has been rebuilt.”

“As of January 2015, only 36 schools with minor damage have been repaired out of a total of over 258 damaged and eight destroyed in the attacks,” the report states.

Around 70 Israelis, of whom five were civilians, died as a result of clashes between Israeli occupation forces and Palestinian resistance groups in Gaza.

The report also confirms that Israel has relentlessly violated the 26 August ceasefire; there have been more than 400 recorded incidents of Israeli fire on farms in Gaza and on fishing boats, “resulting in the death of one fisherman and injuries to other Palestinians workers.”

In an acknowledgment that Palestinians have with very rare exceptions rigorously abided by the one-sided ceasefire, the report confirms that in the period from 26 August 2014 to 31 March 2015, “Four rockets have been fired from Gaza toward Israel, resulting in no injuries.”

At least ten people have been killed and 36 injured due to unexploded munitions since the “ceasefire,” the report states.

Shortly after Israel’s attack on Gaza, an international donor conference in Cairo pledged $3.5 billion for reconstruction. Yet six months later only about a quarter of the funds have been delivered.

Qatar, which pledged $1 billion has delivered just ten percent of what it promised. Saudi Arabia has also transferred ten percent of the $500 million it pledged. Kuwait, Turkey and the United Arab Emirates have not provided a single dollar of the $600 million they collectively pledged.

The EU, which made a modest pledge of $348 million, has only delivered 40 percent. Ironically, the US, which actively assisted Israel in the destruction and killing in Gaza by providing many of the weapons used, has already delivered 85 percent of its also modest pledge – given its size and wealth – of $277 million.

There must be consequences:

The report advocates that “Israel’s illegal policies need to be challenged with practical measures.”

Among the measures the aid agencies propose:

•Making EU and other international relations with Israel conditional on it meeting its legal obligations, including using the EU-Israel Association Agreement as a form of pressure.

•“Where arms and ammunition could be used to commit or facilitate violations of [international humanitarian law], the Arms Trade Treaty (ATT), which all contributors at the Cairo donor conference have at least signed (if not ratified), obliges state parties to suspend transfers and consider revoking licenses to the parties concerned.”

The report notes that “by closing the Rafah crossing, Egypt may also be failing to uphold its humanitarian obligations,” but there is no specific recommendation for how the Egyptian military regime should be held accountable.

Throughout, the report affects a tone of balance – at times falsely equating the actions of the occupying power with those legitimately resisting its occupation and siege. And all the measures its proposes are similarly aimed at Israel and Palestinian resistance groups.

But no one looking at the stark facts the report contains can reach any other conclusion except that the overwhelming responsibility for, and power to change, the catastrophic situation lies with Israel – which the report terms the “occupying power” in Gaza – and the countries that are complicit in its crimes.

Moreover, since Hamas is embargoed and boycotted by the EU and the so-called “international community,” and only Israel receives weapons from these same states, in practice, the proposed punitive measures can only apply to Israel.

Indeed, the report faults the policy of boycotting Hamas – the de facto authority within Gaza – and calls for more engagement.

The “balanced” language – and the attempt, in places, to falsely equate the occupier with the occupied – likely reflect the difficulty of achieving consensus among dozens of aid agencies, especially those that receive funding from governments closely allied with Israel.

Nonetheless, this report includes the strongest recommendations to date for holding Israel accountable, from aid agencies many of which have been all too willing to uphold a status quo that leaves Israel’s crimes unchallenged. As such it is a modest and belated step in the right direction.

It remains to be seen whether the complicit governments, especially those of the EU, that are full partners in what the report correctly terms Israel’s “war crimes,” will begin to reform their behavior.