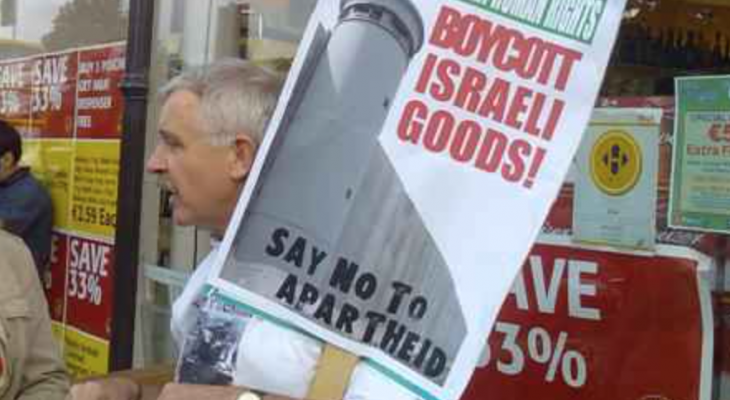 Major Israeli food exporters are facing an unprecedented wave of cancelations in orders from Europe as a result of Israel’s most recent massacre of Palestinians in Gaza.

SuperValu, the biggest food distributor in Ireland, told the Irish media last week that it has withdrawn Israeli products from its shops.

And Israeli media reports suggest that other major European retailers have taken similar decisions without announcing them publicly.

Israeli fruit and vegetable exporters have faced cancelations from Scandinavia, the UK, France, Belgium and Ireland.

Retailers have become fearful of the rapidly growing consumer boycott of Israeli goods, according to an 11 August article in Hebrew business website The Marker.

A spokesperson for EDOM, a major Israeli fruit grower and exporter that has extensive operations in illegal Israeli settlements in the occupied West Bank, told The Marker:

“Importers from Europe are telling us that they can’t sell Israeli produce … One European buyer has told me that he had been blocked in several chains in Denmark and Sweden, and then in Belgium. Last weekend, he told me that mangoes which had been packaged in the Netherlands, as always, and shipped to Ireland, were returned, claiming that Israeli produce would not be accepted …”

“I’ve heard of major exporters from whom chains in southern France are no longer buying. There is no official boycott, but everyone is afraid of selling Israeli fruits. We can only hope that things do not get worse.”

Among the other exporters interviewed for the article is an Israeli pomegranate grower who is quoted as saying that they had been forced to cancel their “entire work plan in the UK” because major retail chains were no longer interested in Israeli goods, and that similar messages had been received from importers in Belgium and Scandinavia.

A separate article published in The Marker on 27 July details how fruit juice producer Priniv had lost a major contract with a business in Sweden after refusing a request to export the produce in a way that would make it easier to conceal the fact it was produced in Israel. Customers in Belgium and France also made similar requests.

Organised boycott, divestment and sanctions (BDS) campaigns have in recent years succeeded in pressuring retailers across Europe to announce that they will not stock produce from illegal Israeli settlements or from companies that operate in settlements. The Tesco chain the UK is the latest to make such an announcement.

But it is now becoming increasingly clear that European businesses are starting to react to growing public support for Palestinian rights and boycotts of Israel in Europe. They are deciding not to sell Israeli produce of any kind — at least for now.

Ireland’s largest grocery and food retailer distributor SuperValu instructed all of its 232 stores to remove Israeli products from the shelves earlier this month.

In an email to store managers, the chain called on store managers to “remove all stock from available sale and dispose of [it] at store level.”

“It’s mostly fruit and vegetables, carrots and herbs more specifically,” a source from the retailer told the Irish Herald.

Following the Irish Herald story, SuperValu issued a statement saying that it has not officially endorsed the boycott of Israel but did not deny that Israeli products have been removed from its stores.

Major Irish toy store Smyths may have taken a similar decision, temporarily displaying a poster at one Dublin store stating that it had removed products made in Israel from the shelves.

The decisions come as part of a huge upsurge in support of the Palestinian struggle and boycotts of Israel across Ireland.

Protests have been held in retailers across the country and calls for boycott have been made by national trade unions, local councils and even sports stars including Irish and Leinster rugby star Gordon Darcy.

Calls for boycotts of Israeli products, for sanctions and a military embargo to be imposed on Israel have been a key part of the huge mass demonstrations in solidarity with Gaza that have taken place across the world in recent weeks.

Civil society organisations are responding to the attack on Gaza by announcing new boycott initiatives.

In the weeks and months that follow, the challenge for campaigners will be to ramp up the pressure on retailers to remove Israeli products and to make their refusal to do so public.

Campaigns against the sale of Israeli fresh produce have been a major focus of the solidarity movement in Europe in recent years.

BDS initiatives have focused on Israeli companies such as Mehadrin and EDOM that play a key role in the colonisation of Palestinian land in the West Bank and profit from the siege of Gaza, as research published by Palestinian farming unions has detailed.

In January, Israeli settler leaders in the Jordan Valley region of the West Bank told the Associated Press that the boycott, divestment and sanctions campaign had cost settlers $29 million in lost sales, especially in Europe.

Campaigns against Israeli fresh produce exporters have intensified following the decision by the UK Co-operative retail chain to boycott all companies that operate in settlements, with campaigns also underway in France, Spain, Belgium, the Netherlands, Germany, Norway and Sweden.

In 2011, Israeli export company Agrexco entered into liquidation after boycotts and campaigns in thirteen European countries that saw retailers cut links with the company, blockades of its UK and Belgium warehouses and a huge mobilisation against plans for an Agrexco distribution centre in Sete in the south of France.

Israeli analyst Shir Hever suggested at the time that farmers leaving Agrexco to export their products through other channels because of the boycott campaign was a major factor behind the company’s collapse.