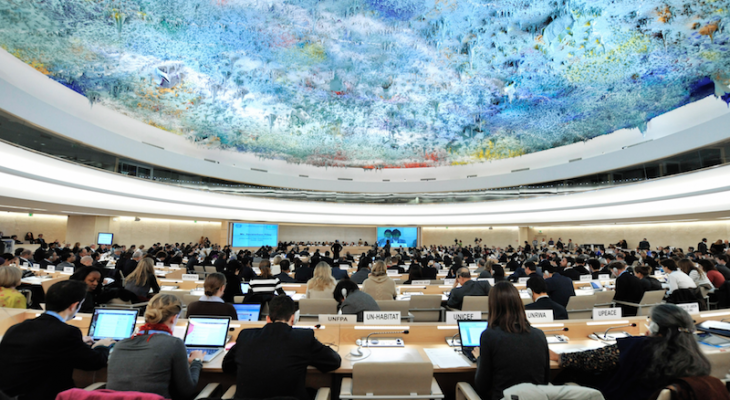 The 47-member UN Human Rights Council today adopted a resolution on the Palestinian people's right to self-determination with 45 countries, including India, voting in its favour.

Out of the 47 UN Human Rights Council (UNHRC) members, 45 voted in favour with only the US voting against the resolution and Ghana abstaining.

"We all heard what the Prime Minister of Israel said on the 16th of March and promised in the electoral programme that if re-elected he would prevent the two state solution and resist the idea of any withdrawal of land occupied in 1967 and continue to steal land and build settlements on it. No further explanation is needed," he said.

Pakistan, the sponsor of the text, speaking on behalf of the Organisation of the Islamic Cooperation (OIC) member-states stated that "the realisation of the right to self-determination is an essential condition for the promotion and protection of human rights and fundamental freedoms."

"The resolution also reaffirms the support for two state solution -- Palestine and Israel -- living side by side in peace and security," said Zamir Akram, the Permanent Representative of Pakistan to the UN Offices in Geneva.

There are currently four resolutions under Agenda Item 7 -- Human Rights Situation in Palestine and Other Occupied Arab Territories -- which has been a permanent item since the genesis of the UNHRC.

India voted in favour of all the four resolutions while the US voted against all the resolutions under Agenda Item 7.

The voting pattern on three resolutions was the same -- 45 in favour with the US against and Ghana abstaining -- but on the resolution on human rights in the occupied Syrian Golan 29 voted in favour, one against and 17 abstentions.

The US, in an explanation of the vote, said it believes that the only way to solve the conflict between Palestine and Israel to achieve "comprehensive peace" was to create two states since status quo is not sustainable.

The US also said, "We remain troubled by the Council's stand-alone agenda item directed against Israel. Only Israel receives this treatment. Such singling out undermines the credibility of the Council."