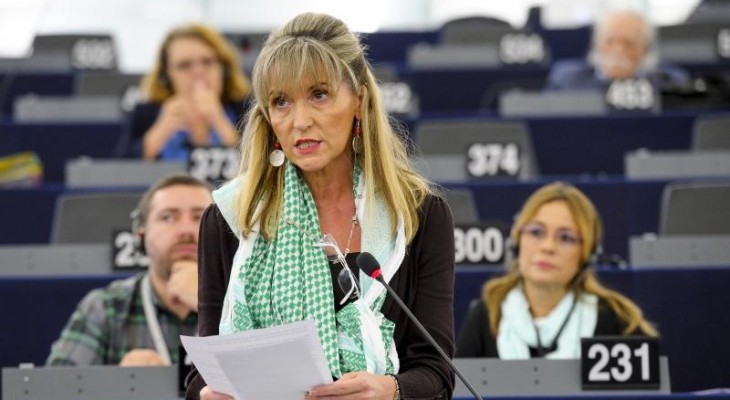 Last week, I led my first official delegation to Palestine, as chair of parliament's delegation for relations with the Palestinian legislative council (DPLC). After being held by security for two hours in Tel Aviv airport, I was informed that the delegation was denied access to Gaza. Israeli authorities offered no excuse for denying access to the official European parliament delegation.

In October 2013 and September 2014 I was part of DPLC and GUE/NGL delegations to Palestine. Both were refused access to Gaza. It is clear to me from these experiences that Israel has a complete lack of respect for the European parliament.

So, for the third time, I visited Jerusalem and the West Bank, which are suffering greatly due to Israeli occupation.

20 years have passed since the celebrated handshake between Palestine liberation organisation chair Yasser Arafat and Israeli prime minister Yitzhak Rabin on the White House lawn, since the establishment of the Palestinian national authority and the formal start of the 'peace process.'

In reality, it has been 20 years of shattered hopes, unfulfilled obligations and an unceasing illegal colonisation process that persistently undermines a just and peaceful two state solution.

During the election campaign earlier this month, current Israeli prime minister Binyamin Netanyahu himself exposed the 20-year pretence that Israel was a genuine partner for peace, when he said that there would be no Palestinian state.

The 1995 Oslo accord detailed the mechanism for extensive Israeli withdrawal from the occupied Palestinian territory. The third and final Israeli redeployment in the West Bank was to have concluded within 18 months of the election of the Palestinian legislative council. However, today Israel remains in full control of over 61 per cent of the West Bank, designated as 'area C' in violation of the accord.

Since 1995, Israel has built over 50,000 settlement-housing units and nearly tripled the settler population in the occupied Palestinian territory, where over 550,000 settlers currently live.

In building its illegal settlements, Israel is in breach of international law, as reflected in the fourth Geneva convention and the Rome statute of the international criminal court.

During the delegation, we met with Saeb Erekat, the Palestinian chief negotiator who said that all actions that reinforce the 1967 borders and respect international law must be embraced by the international community. This means following the Swedish model, which is to give due recognition to the state of Palestine.

At present, the two state solution is drowning under expanding settlements and the international community's failure to deal with Israel's persistent violation of international law.

The absence of any meaningful progress is having serious implications. A recent leaked EU report describes the emergence of a "vicious cycle of violence […] increasingly threatening the viability of the two-state solution", which is due to systematic settlement building by Israel in sensitive areas of Jerusalem.

Despite this, it is clear the Palestinian authority remains committed to the two state solution. However, if progress is to be made in this regard, the international community - including the EU - needs to hold Israel to account, and it must stop treating Israel as a state above the law.