10 years of the Polish office in Palestine 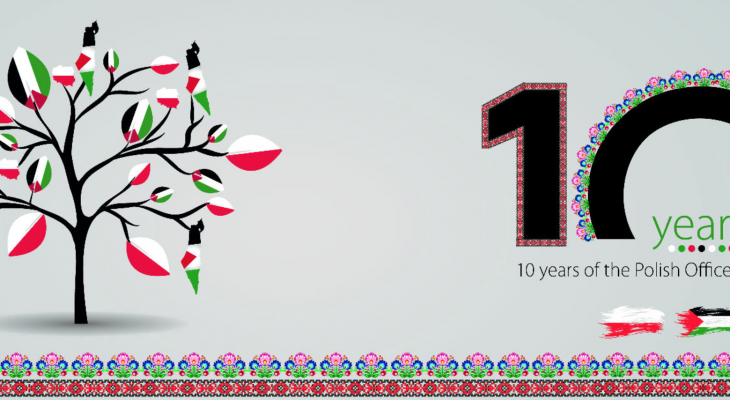 This year we are celebrating 10 years since the opening of the Office of the Representative of the Republic of Poland to the Palestinian national Authority in Ramallah. We have commissioned 2 new logos to commemorate this and here we present a brief outline of the stages in Polish-Palestinian relations.

Official contact between Poland and the political representation of the Palestinian people – the Palestine Liberation Organisation (PLO) - was established in the mid-70s. PLO mission to the Committee of Solidarity with the Asian, African and South American nations, was opened in 1976, however it was not granted the status of a diplomatic mission.

In the 70s the Polish attitude towards the Palestinian issue was based on ideological and political elements as well as resulting from recognition of existing facts and the belief that long-lasting peace and stability in the Middle East are impossible to achieve without fulfilment of the national aspirations of Palestinians. At the same time Poland recognised the right of Israel to peaceful existence.

Diplomatic relations between Poland and the PLO were established in July 1982 (after Israeli aggression in Lebanon). Representation of the PLO received the official status of a diplomatic mission, and its director - with the status of ambassador - the privilege of accreditation to the head of state.

Renaming the PLO mission in Warsaw to “The Embassy of the Palestinian State” took place in 1989 during the visit of Mr. Arafat due to a unilateral Palestinian decision and it was then adopted by the Polish authorities (the Polish position resulted from the decision of the UN General Assembly from December 15, 1988 concerning the use of the name “Palestine” instead of “PLO”). As a result of the signing of the peace agreement between the PLO and Israel in 1995, the name “Embassy of Palestine” started to be used in order to stress the fact that the peace process will result in the creation of a Palestinian state.

Characteristics of relations: Polish-Palestinian relations are traditionally characterised by a friendly atmosphere and good cooperation. There are no problems in bilateral relations. Poland supports the right of the Palestinian people to self-governance and its aspirations to achieving an independent Palestinian state as a result of the Middle East peace process. Both sides maintain high level political dialogue. Parliamentary friendship groups are operating. Cooperation in many fields is developing, especially in the field of tourism and cultural relations. Cooperation takes also place at the local governmental level (among others cooperation between Lublin and Ramallah).

The Association of Palestinian Alumni from Polish Universities and a scholarship assistance program for students were established. Poland assists the Palestinian National Authority with assistance grants as well as contributing to the voluntary fund for Palestinian refugees.