European companies complicit in a new project in East Jerusalem 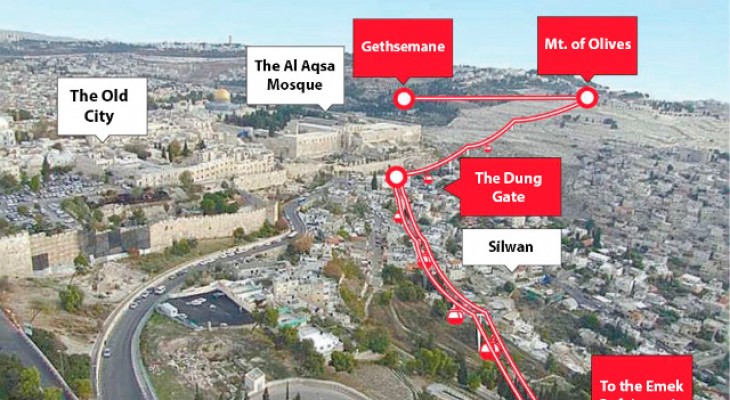 European companies are involved in the new Cable Car project in East Jerusalem. A joint project sponsored by the Israeli government and the Jerusalem Municipality aims to construct a cable car that will link West Jerusalem, the Old City, Mount of Olives near the Seven Arches Hotel and Gethsemane.

The Israeli municipality in Jerusalem recently hired the French company SAFEGE to do a feasibility study on the cable car that run from West to East Jerusalem. SAFAGE contracted with another French company, POMA, which specialises in cable cars.

As a consequences the project will:

•operate within a discriminatory transportation system

Other entities involved in the project include:

•Elad, the right-wing organisation that runs the City of David national park near the Western Wall.

Israel annexed East Jerusalem in breach of UN Charter and International law which forbid acquisition of territory by force or threat of force. Since 1948, Israel has implemented systematic and deliberate policies of colonisation and annexation of Palestinian territory in and around the city of Jerusalem. The participation of European companies in the project will directly contribute to and will make them complicit in acts that are illegal under international law.

Business involvement in Israel contains legal implications. According to international law as applied in the 2004 International Court of Justice advisory opinion on Israel’s wall and settlements, third party states are violating their own obligations to not recognise nor render aid or assistance to these serious Israeli violations by allowing financial and economic activity with complicit entities.

Last year 19 EU member states have issued guidance to private business that warn businesses about the economic, legal and reputational “risks” of economic ties with illegal Israeli settlements and state that firms should be aware of the “possible abuses of the rights of individuals”.

By participating in this project european companies would be making a political decision to become deeply complicit with Israel’s violations of international law and Israel’s oppression of Palestinian rights.

French organisation AFPS sent a protest letter to the French Minister of Foreign Affairs concerning the participation of french company SAFEGE in a cable car project.

Write a letter to POMA’s branch in your country with demand to end their participation in the project!