Report: Israel and the Occupied Palestinian Territories by the Foreign & Commonwealth Office 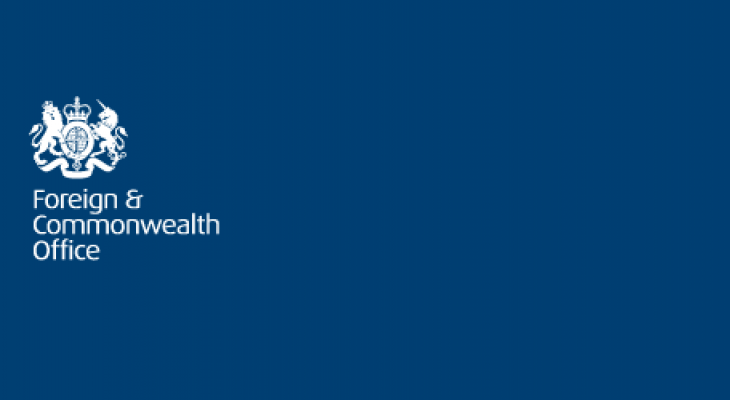 Throughout 2014, the UK supported the United States-led push for a comprehensive settlement of the Israeli-Palestinian conflict; we were disappointed that greater progress was not made. We stand ready to assist the parties if negotiations resume.

We remained seriously concerned about the human rights situation in Israel and the OPTs in 2014. Our principal concerns related to the Israeli government’s violation of international human rights and humanitarian law in the context of Israel’s occupation of the OPTs. And we continued to have concerns about serious human rights abuses by Hamas.

The humanitarian situation in Gaza deteriorated significantly. The summer conflict left over 2,000 people dead, and more than 100,000 homeless, with 450,000 lacking access to clean water. To date, reconstruction has been insufficient.

The Israeli authorities continued with settlement expansion, reintroduced punitive demolitions of Palestinian property, and made little progress to ease restrictions on movement and access. Access to the Holy Sites in Jerusalem was restricted on several occasions, including the Haram al Sharif/Temple Mount being closed to all faiths for the first time since 2000. There was also a lack of progress on the rights of minorities.

We continued to seek improvements in the treatment of Palestinians in detention, notably children. The Israeli authorities took some positive steps, including a change in procedure to use summonses in place of night-time arrests. We will push for these changes to be fully implemented and to encourage further changes in practice.

We continued to have concerns about breaches of human rights under Hamas, the de facto government rule in the Gaza Strip, particularly during the summer’s conflict, with reports of the use of human shields and extrajudicial executions. We were also concerned by continued reports of mistreatment towards detainees by the Palestinian security forces in the West Bank.

In 2015, we will support genuine efforts towards a final resolution to the conflict. We will work for all sides to maintain calm, and take steps towards peace. We will continue to oppose any aspects of the Israeli occupation that violate human rights and humanitarian law. We will push for the cessation of construction of settlements, which the UK condemns in the strongest terms, maintenance of the status quo at Haram al Sharif/Temple Mount, and the necessary reconstruction and improved movement and access for Gaza.

Parliamentary and presidential elections in the OPTs remained overdue, and blocked by intense differences between Hamas and the Palestinian Authority (PA). We welcomed the formation of a new technocratic government, but limited progress was made towards Palestinian reconciliation after the Gaza conflict.

Freedom of Expression and Assembly

Freedom of expression and assembly continued to be well-observed within Israel.

Within the OPTs, our long-standing concerns about Israel’s policing of Palestinian protests remained. The Israeli Defence Force (IDF) frequently used shock grenades, tear gas and, increasingly, live fire to disperse crowds or respond to throwing of stones or Molotov cocktails.

On 10 December, Palestinian Minister Ziad Abu Ayn died following an incident at a Human Rights Day event. Video footage showed that Ayn was pushed in the chest and grasped around the throat by an Israeli soldier as the IDF dispersed the crowd. The circumstances of the incident continue to be investigated; initial autopsy results indicated that Ayn had an underlying health condition.

The Palestinian Centre for Development and Media Freedoms (MADA) judged that continued internal Fatah-Hamas tensions negatively affected media freedoms. The positive 2013 trend reversed in 2014 both in the West Bank and Gaza, with violations including physical assault, detention, and interrogation.

Reports of Israeli security forces harassing Palestinian HRDs continued. We issued a statement of our concern at the imprisonment of Murad Shteiwi, arrested in April on charges of participating in and organising illegal demonstrations.

Hamas, the de facto government in Gaza, continued to target HRDs with accusations of collaborating with foreign countries.

We were also concerned at the passing of Israeli legislation to allow force-feeding of prisoners on hunger strike.

All Palestinians, except residents of East Jerusalem, are subject to trial in Israeli military courts. Israeli settlers, who are citizens of Israel, are tried within Israeli civil courts. The UK was concerned by the lack of convictions against extremist Israeli settlers responsible for violence against Palestinians and Palestinian property.

Israel abolished capital punishment in peacetime in 1954, excepting those responsible for Nazi war crimes. Israel’s last execution was in 1962.

Although PA law permits the use of capital punishment, a moratorium has been in place since the end of 2009.

Hamas, the de facto government in Gaza, carried out 27 executions of alleged collaborators. Some executions were carried out after summary trials or without trials, so could be characterised as extrajudicial. EU member states condemned.

these executions. The UK urges that the death penalty be abolished across the Palestinian Territories.

Non-governmental organisations (NG0s) alleged mistreatment of Palestinian detainees by the Israeli authorities during the arrest and interrogation processes.

Conflict and Protection of Civilians

Three Israeli teenagers were kidnapped in the West Bank on 13 June, and their bodies found near Hebron on 30 June. On 2 July, a Palestinian teen was kidnapped and burnt alive. Following this, there was a significant increase in tensions and a worsening security situation, including intensive and indiscriminate rocket attacks on Israel by Hamas militants. Israel launched Operation Protective Edge on 8 July, with subsequent ground operations from 17 July, leading to 51 days of conflict, and a severe humanitarian crisis in Gaza. The UK condemned the rocket attacks and stressed the need for de-escalation.

Throughout the hostilities, the UK was clear that Israel had a right to take action but needed to do so proportionately and minimise civilian casualties, in line with international humanitarian law. The Foreign Secretary, Philip Hammond, raised concerns about the number of casualties and humanitarian impact with Israeli Prime Minister Binyamin Netanyahu, Foreign Minister Lieberman, and PA President Abbas. Israeli forces initially withdrew from Gaza on 5 August. Following several attempts to negotiate a ceasefire and intermittent resumptions of violence, an open-ended ceasefire supported by all parties was agreed on 26 August.

According to the UN Office for the Coordination of Humanitarian Affairs (OCHA), 2,131 Palestinians were killed, of whom 1,473 were identified as civilians, including 501 children and 257 women. There is a disparity between figures regarding the number of Palestinian civilians killed. 74 Israelis were also killed. At the height of the conflict, 292,000 people were sheltering in UN Relief and Works Agency for Palestine Refugees in the Near East (UNRWA) and government schools, set up as emergency shelters. In December, nearly four months after the end of the war, 19,000 internally displaced persons were living in UNRWA schools. The UK provided £19 million of emergency assistance during the conflict.

The UK played its full role, and attempted to secure a balanced resolution on Gaza at the emergency session of the UN Human Rights Council in July 2014. However, our view was that the resolution would not help achieve a lasting ceasefire and was fundamentally unbalanced. Whilst we remained deeply concerned by the bloodshed in Gaza, the UK joined other EU nations in abstaining in the vote. However, the UK encouraged all parties to cooperate with the Commission of Inquiry (Col) mandated by this resolution, which we have said must be independent and balanced in its approach. The Israeli authorities have launched a number of internal processes to investigate specific cases of engagement, which we are following closely.

In the last quarter of 2014, East Jerusalem and the West Bank saw an increase in violent clashes between Palestinians and Israeli police and several terrorist attacks.

Freedom of Religion or Belief

Hamas, the de facto government in Gaza, continued to restrict religious freedom or belief. The practice of religions other than Islam is difficult. There continued to be reports of arrests and detentions of individuals who do not abide by Hamas' own strict interpretation of Islam.

Whilst freedom of religion or belief was broadly respected in Israel and the West Bank, there continued to be incidences of religious intolerance in 2014. Reports of attacks on holy sites in the region continued, including the vandalism of a number of Christian and Muslim holy sites in East Jerusalem, and a number of incidents of vandalism at synagogues. Officials at the British Embassy in Tel Aviv and British Consulate General in Jerusalem raised concerns about provocative acts, urging action be taken to bring the perpetrators to justice.

Due to Israeli movement and access restrictions, outside of the Muslim holy month of Ramadan, access to the holy sites of Jerusalem, including al-Aqsa Mosque was heavily restricted. On 30 October, Israeli authorities closed the Haram al Sharif/ Temple Mount compound to all faiths for the first time since 2000, in response to an unstable security situation, including the shooting of a prominent US-Israeli Jewish activist.

The closure of Al Aqsa sparked a series of violent incidents and increased tensions in Jerusalem, including sporadic clashes at the Haram al Sharif/Temple Mount, and a number of terrorist incidents around the city, including an attack by Palestinians from East Jerusalem on a synagogue in West Jerusalem. This left four worshippers dead, including a dual British-Israeli citizen. The UK urged both sides to reinstate calm, and encouraged Israeli security forces to avoid unnecessary use of force in its responses.

Hamas, the de facto government in Gaza, continued to restrict religious freedom or belief. The practice of religions other than Islam is difficult. There continued to be reports of arrests and detentions of individuals who do not abide by Hamas' own strict interpretation of Islam.

We continued to have serious concerns about the suppression of women's rights in Gaza; Hamas, the de facto government, increased the number of Islamic restrictions imposed on Gazan life.

The UK welcomed the government of Israel's efforts to promote gender equality and women's rights, and implementation of existing legislation that addresses domestic and sexual violence against women and girls. Israel was a committed supporter of the Preventing Sexual Violence Initiative, launched in May 2014, and endorsed the Declaration of Commitment to End Sexual Violence in Conflict.