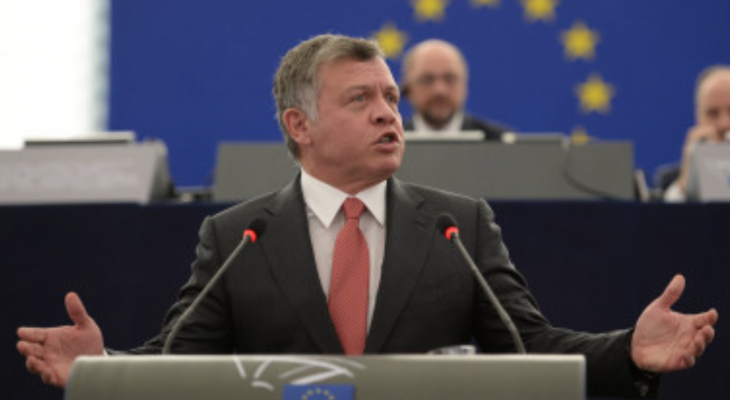 King Abdullah II of Jordan Tuesday lambasted terrorist groups like ISIL and extremists in Europe for distorting the message of Islam, but he also stressed that the Palestinian question must be resolved to establish global peace and security.

"Our fight (against terrorism) will continue. This is the fight that has to be carried out by Muslim nations first and foremost. This is a fight within Islam," he told the European Parliament in Strasbourg in a speech.

He noted that at the same time the threat of extremism is global and called for a meaningful inter-faith outreach, a dialogue of respect.

"Insulting other people's faith and their convictions is no way forward. The future lies in unity and respect not division and stereotypes. Europe is an important partner in this effort especially in helping to stop the global rise of Islamophobia. This poison is based on false ideas and helps to play in the hands of extremists," said King Abdullah.

Islam, he underlined, demands respect and caring for others and noted that Muslims greet other with the salutations Assalam Alaikum which means peace be upon you.

"This is what means to be a Muslim. Our faith commands peace, mercy and tolerance. Those outlaws of Islam who deny these truths are vastly outnumbered by the ocean of believers, 1.6 billion Muslims worldwide. In fact these terrorists have made the world's Muslims their greatest target. We will not allow them to hijack our faith," stressed Abdullah.

Referring to the Palestinian question, he said "again and again I hear the question why the world does not defend the Palestinian rights. Time after time the peace process has stalled. More Israeli settlement building less respect for the occupied Palestinians." "This sends a dangerous message. It erodes trust in international law and community. It threatens the pillar of world peace that conflict must be solved by political means and not by force and violence," he said.

"The extremists exploit the injustices and the lingering conflict to build legitimacy and recruit foreign fighters across the world and Europe. How can we fight the ideological battle if we do not chart the way forward towards Palestinian-Israeli peace?," he asked.

The Jordanian monarch expressed his outrage against the recent attack against some Christians and minority communities saying this is an offence against humanity and Islam.

"Arab Christians are an integral part of our region's past, present and future. Jordan is a Muslim country with a deeply rooted Christian community," he said.

The full European Parliament welcomed his speech at the end with a very long applause.

It was King Abdullah's fourth appearance in the European Parliament, following his visits in 2002, 2007 and 2012.