Seminar: The politics of reconstruction in Gaza 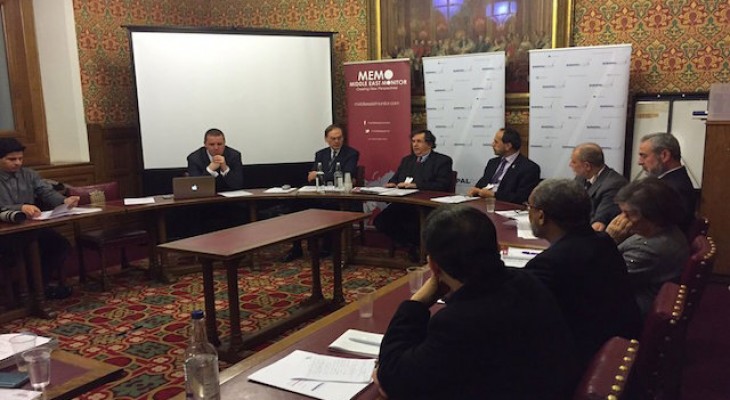 The politics of Gaza's reconstruction was the topic of discussion at the UK House of Lords yesterday in a seminar jointly organised by Middle East Monitor and the EuroPal Forum.

A number of British parliamentarians and foreign representatives participated in the seminar which was hosted by the British peer John Montagu.

Gaza, EU and Palestinian governance were the main themes of the seminar. Leading experts and participants drew attention to the grave humanitarian crisis in Gaza and the politicisation of its reconstruction, which has failed miserably in keeping pace with the level of destruction caused by Israel.

Gaza has been crippled by the ongoing Israeli blockade, now in its eight year, and further devastated by multiple Israeli bombardments. Reconstruction of the densely populated Strip has been moving at a snail's pace due to the failure of donors to meet their financial commitments and pledges.

Israel's attack last summer on the 1.8 million population - most of whom are refugees and have experienced multiple displacements over the past 67 years - was the most lethal in Gaza's history: it resulted in 2,200 deaths, the destruction of 18,000 housing units, 108,000 Palestinians were made homeless in addition to the 12,000 who were already homeless following the 2008/2009 Israeli offensive Operation Cast Lead.

Gaza requires $7.8 billion for essential reconstruction. Some $5.4 billion was pledged at the international conference in Cairo last October but only $300 million has been received.

The massive shortfall in meeting the current needs, combined with years of cumulative deficit experienced by the United Nations Relief and Works Agency (UNRWA), is making the Strip "unliveable", according to the UN agency.

A ten minute presentation by the three speakers steered a lively discussion that listed the political obstacles to the reconstruction of Gaza and how it can be overcome. In his analysis, Buckley looked at the regional instability and Israel's "double punishment" of Palestinians who not only had to endure Israeli bombardment but are now also impeded in their reconstruction by Israel's tight restrictions on the material allowed to enter the Strip. Under the current set up, "Gaza' reconstruction will take many decades", he explained.

Corbyn and Tamimi catalogued the growing support for Palestine in Europe and its significance for the Palestinian Authority mainly to highlight the avenues through which the EU and international community can depoliticise the humanitarian tragedy: "Recognition of a Palestinian state was a major stride in this regard as well as accepting the outcome of the democratic process in Palestine".

An open letter based on the outcome of the discussion will be sent to the presidents of the EU Parliament and the European Council as well as the High Representative of the Union of Foreign Affairs and Security Policy.