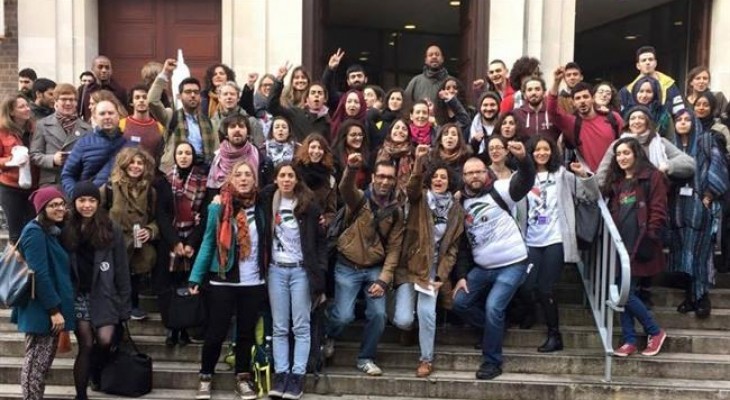 Students and staff at the SOAS school of the University of London have approved an academic boycott of Israel during a week-long referendum.

The vote yesterday, which was open to all students, academics, and management, ended with 73 percent voting for and 27 percent voting against the 'Yes' campaign to boycott Israel.

The voters were asked whether they agree with the School of Oriental and African Studies, commonly abbreviated as SOAS, joining the Boycott, Divestment and Sanctions (BDS) campaign to impose an academic boycott on Israel based on the instructions of the Palestinian Campaign for the Academic and Cultural Boycott of Israel (PACBI).

The BDS is a global campaign which uses economic and political pressure on Israel to comply with the goals of the movement -- the end of Israeli occupation and colonisation of Palestinian land, full equality for Arab-Palestinian citizens of Israel, and respect for the right of return of Palestinian refugees.

The PACBI says academic boycott of Israel is based on the fact that the academic institutions are massively complicit in Israel’s persistent denial of basic Palestinian rights, including academic freedom and the right to education.

The SOAS Students' Union has also endorsed the BDS campaign since 2005. The union ratified a motion in October 2014, urging its leaders "to take the BDS campaign to the university" through a referendum.

Proposals for the academic boycott of Israel have been inspired by the historic academic boycotts of the Apartheid regime of South Africa that were an attempt to pressure the regime to end its abuse of the majority black inhabitants.

Suggestions for the boycott of Tel Aviv have also been made by academics and organisations in other countries including South Africa and Australia.

The goal of the boycotts is to isolate Israel in order to force a change in its oppressive and discriminatory policies towards the Palestinians.