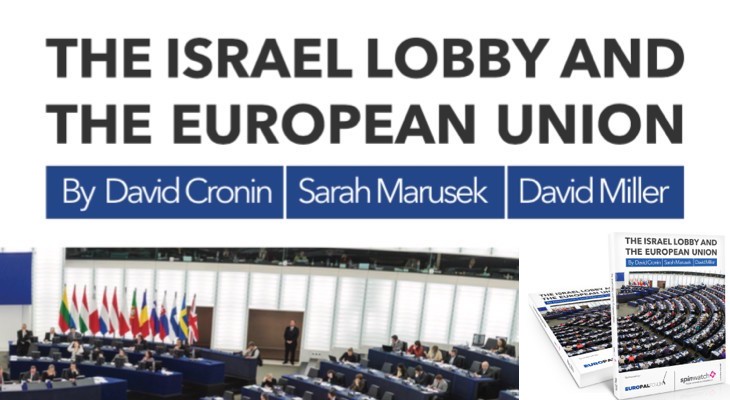 A new report on The Israel lobby and the European Union will be released on 9 May (Brussels) and 13 May (London) 2016. Researched and written by Public Interest Investigations/Spinwatch and published by EuroPal Forum. The report reveals the extent to which noted American funders and proponents of the Islamophobia industry in the United States and Israel’s illegal settlement project in the occupied West Bank and east Jerusalem are also financing the expanding Israel lobby in Brussels.

The report, which took more than two years to complete, uncovers the matrix of relationships within the Israel lobby – a social movement that overlaps considerably with the transatlantic Islamophobia industry. For example, key backers of the Israel lobby in Brussels include:

• Nina Rosenburg, heiress to the Sears Roebuck fortune who was dubbed by journalist Max Blumenthal as ‘the sugar mama of anti-Muslim hate’

• Daniel Pipes, labeled by the Center for American Progress as part of a network of ‘misinformation experts’ that ‘peddle hate and fear of Muslims and Islam’

The Israel Lobby and the European Union challenges the secrecy surrounding this transatlantic network. It identifies where pro-Israel groups receive their funding and how some of their donors have facilitated Israel’s illegal colonisation of the West Bank, including east Jerusalem; examines how the lobby has persuaded European law-makers to refrain from sanctioning Israel over its human rights abuses; and analyses how Israel’s supporters have been trying to undermine grassroots campaigning for justice in Palestine.

This seminal report raises questions about not only the influence of right-wing American activists on EU policy, but also how EU institutions have accommodated the smear campaign that the Israel lobby is conducting against the Palestine solidarity movement.

To request a copy of the report, please contact: admin@europalforum.org.uk

- To attend the Brussels launch on 9 May, RSVP to: https://www.eventbrite.co.uk/e/the-israel-lobby-and-the-european-union-report-launch-in-brussels-tickets-24894487081

- To attend the London launch on 13 May, RSVP to: https://www.eventbrite.co.uk/e/the-israel-lobby-and-the-european-union-report-launch-in-london-tickets-24894778954

David Cronin is an Irish journalist and political activist living in Brussels. He is the author of Corporate Europe: How big business sets policies on food, climate and war (Pluto, 2013) and Europe’s alliance with Israel: Aiding the occupation (Pluto, 2011).

Sarah Marusek is a Post-Doctoral Research Fellow in Religion Studies at the University of Johannesburg, South Africa. She is co-author of both The Henry Jackson Society and the degeneration of British Neoconservatism: Liberal interventionism, Islamophobia and the ‘War on Terror’ (Public Interest Investigations, 2015) and How Israel attempts to mislead the United Nations: Deconstructing Israel’s campaign against the Palestinian Return Centre. (Public Interest Investigations, 2015).

David Miller is Professor of Sociology in the Department of Social and Policy Sciences at the University of Bath. In 2004 he co-founded Public Interest Investigations, a non-profit company of which Spinwatch.org and Powerbase.info are projects. Recent publications include: The Britain Israel Communications and Research Centre. Giving peace a chance? (Public Interest Investigations, 2013, co-author), Stretching the sociological imagination: Essays in honour of John Eldridge (Palgrave Macmillan, 2015, co-editor) and The new governance of addictive substances and behaviours (Oxford University Press, forthcoming, 2016, co-author).

EuroPal Forum (www.europalforum.org.uk) is an independent organisation advocating Palestinian rights and working to build networks throughout Europe to achieve a positive and accurate public opinion on Palestine. It aims to promote dialogue and understanding between Palestinian and European decision makers. EuroPal Forum works towards a just European foreign policy upholding human rights of the Palestinian people and their right to self-determination.