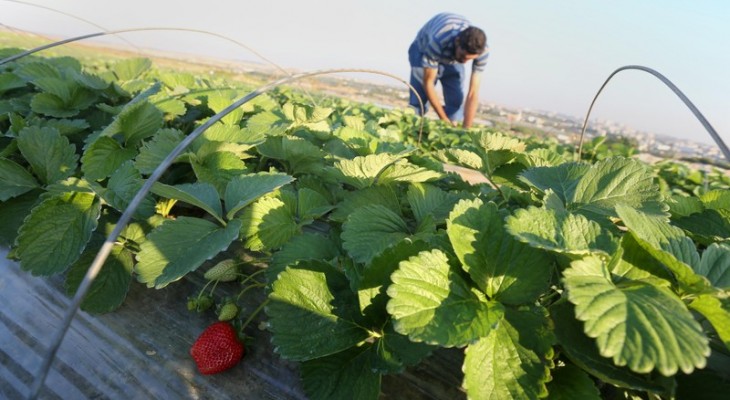 Palestinians whose livelihoods are forcibly enmeshed in Israel’s economic system are often used as human shields against the boycott, divestment and sanctions (BDS) movement.

The frequent accusation made by critics is that boycotts of Israeli businesses, especially settlement businesses, will hurt the very Palestinians that BDS activists say they support.

At times, settlement advocates even deploy Palestinian spokespersons to speak positively about the higher wages they receive working for settlement businesses.

A new report released by UK-based Corporate Watch brings the voices of the Palestinian farmers and agricultural workers to the debate over how the BDS movement can best resist Israeli exploitation of their land and labor.

Corporate Watch’s report, titled, “Apartheid in the Fields: From Occupied Palestine to UK Supermarkets,” focuses on two ofthe most vulnerable segments of Palestinian society: residents of the Gaza Strip and the occupied West Bank’s Jordan Valley.

Anyone entering Gaza through the Erez checkpoint on the northern boundary with present-day Israel, traverses a long, fenced corridor running through the so-called “buffer zone” enforced by the Israeli military.

This poorly defined area ranges from 300 to 500 meters along the inside perimeter of Gaza.

According to the UN monitoring group OCHA, this zone also takes up 17 percent of Gaza’s total area, making up to one third of its farmland unsafe for cultivation. Areas that once held olive and citrus trees have now been bulldozed by Israeli forces.

Corporate Watch says that even though Palestinians are routinely shot at from distances greater than 300 meters, farmers whose land lies near the border have no choice but to cultivate these areas despite the danger.

In addition to the lethal violence routinely inflicted on Gaza, Israeli authorities enforce what they have called“economic warfare” – a de facto boycott of almost all agriculture originating in Gaza.

Virtually no produce from the enclave is allowed into Israeli or West Bank markets, traditionally Gaza’s biggest customers.

From the time Israel imposed its blockade on Gaza in 2007 up until November 2014, a monthly average of 13.5 trucks left Gaza carrying exports – just one percent of the monthly average of goods shipped out just prior to the closure.

By contrast, already this year more than 22,000 trucks have entered Gaza, many carrying Israeli produce considered unsuitable for international export.

Dumping it on the captive market in Gaza further undermines local farmers.

The trickle of exports that Israel permits from Gaza go primarily to European markets, but this is only allowed through

Israeli export companies that profit from the situation by taking commissions and selling Gaza products for far higher prices than they pay the producers.

“The Israelis export Palestinian produce and export it with an Israeli label,” Taghrid Jooma of the Union of Palestinian Women’s Committees told Corporate Watch. “For example, they export roses from Gaza for nickels and dimes and sell them for a lot of money.”

Muhammad Zwaid of Gaza’s only export company, Palestine Crops, told Corporate Watch that part of the problem is that Palestine lacks its own bar code and so any produce exported through Israel carries an Israeli one.

“We have our own stickers,” said Zwaid, “but [Israeli export company] Arava has asked for them to be smaller and often Arava stickers are put on top of ours. Our produce is taken inside Israel by the Israeli company and then taken to a packing station where it is repackaged.”

Corporate Watch reports that while many of the farmers they interviewed support BDS, they also want the opportunity to export their produce and make a living.

This presents a quandary because a boycott of Israeli export companies like Arava will include Palestinian products as well.

Even so, the farmers interviewed maintained their support for BDS as a long-term strategy that outweighs the limited benefits of current export levels.

“What we need is people to stand with us against the occupation,” said one farmer from al-Zaytoun. “By supporting BDS you support the farmers, both directly and indirectly and this is a good thing for people here in Gaza.”

“Farmers all over the Gaza Strip were particularly keen on getting the right to label their produce as Palestinian, ideally with its own country code, even if they have to export through Israel,” the report states. “Country of origin labels for Gaza goods is something the solidarity movement could lobby for.”

Mohsen Abu Ramadan, from the Palestinian Non-Governmental Organizations Network, suggested to Corporate Watch that one strategy could be to engage farming unions around the world to urge them to endorse BDS in solidarity with Palestinian farmers.

Yet well before Israeli Prime Minister Benjamin Netanyahu’s current extreme right-wing government made clear its opposition to a viable Palestinian state, he had pledged to never give up control of this agriculturally rich region under any two-state configuration.

Occupation authorities refuse virtually all Palestinian requests to build or improve infrastructure in the region. Residents face severe restrictions on access to electricity and water as well as other basic infrastructure.

Demolitions of Palestinian homes have increased in recent months, and in February, Israel carried out the largest demolition in a decade.

In the Jordan Valley, settlement agriculture often relies on Palestinian labor – including child labor – to do hazardous jobs for a fraction of what would be paid to Israeli citizens.

Though entitled to the Israeli minimum wage according to a high court ruling, many workers are routinely paid as little as half that.

Palestinians Zaid and Rashid are employed in Beqa’ot, a settlement built on land seized from Palestinians. They receive wages of $20 per day, about a quarter of which goes for daily transport.

They receive no paid holidays despite the fact that the Israeli government advises that workers are entitled to 14 days paid holiday and must receive a written contract and payslips from their employer.

Although they are members of a Palestinian trade union, their settler employers do not recognize any collective bargaining rights.

Workers are moreover frequently pressured into signing documents in Hebrew — which they cannot read — stating that they are being treated according to law. Workers fear being fired if they do not sign.

While Palestinians working in settlements are also required to obtain work permits from the military occupation authorities, several of those interviewed for the report had no such permits, leading to suspicions that employers may be attempting to further circumvent Israeli labor laws by using undocumented workers.

Both Zaid and Rashid told Corporate Watch they back the call for a boycott of Israeli agricultural companies.

“We support the boycott even if we lose our work,” Zaid said. “We might lose our jobs but we will get back our land. We will be able to work without being treated as slaves.”

A common practice by these companies is mislabeling goods as “Produce of Israel” even when they are grown and packed in West Bank settlements that are illegal under international law.

Corporate Watch also documents the varying degrees of success that BDS activists have had in targeting these companies.

Since 2009, following pressure from activists, the UK’s Department for Environment, Food and Rural Affairs issued guidelines stating it is an “offense” to mislabel settlement goods as “Produce of Israel.”

Similar guidelines approved by the European Union late last year outraged Israeli politicians, despite the fact that the same practice has been United States policy since the mid-1990s.

Despite the guidelines, however, UK stores continue to stock Israeli products with misleading labels.

As recently as 2013, Corporate Watch found labels from the Israeli settlement of Tomer for the Morrisons store brand of Medjoul dates.

In another example, the Aldi chain was caught selling grapefruits from Carmel Agrexco labeled as products of Cyprus.

Of the supermarket chains targeted by BDS campaigns, only one, The Co-operative, has pledged to “no longer engage with any supplier of produce known to be sourcing from the Israeli settlements.”

This means that not only would the Co-op not stock settlement produce, but that it would not buy produce grown in present-day Israel from companies that also have settlement operations.

This made it the first major European chain to take such a step.

Corporate Watch points out that while not directly supporting the settlement economy, those Israeli companies without settlement operations still pay taxes to the Israeli government, which supports its ongoing occupation, colonization and oppression of Palestinians.

It notes that the Co-op took a much stronger stance regarding apartheid-era South Africa, when it boycotted all South African products.

In accordance with the 2005 BDS call from Palestinian civil society, Corporate Watch advocates a full boycott of all Israeli goods.